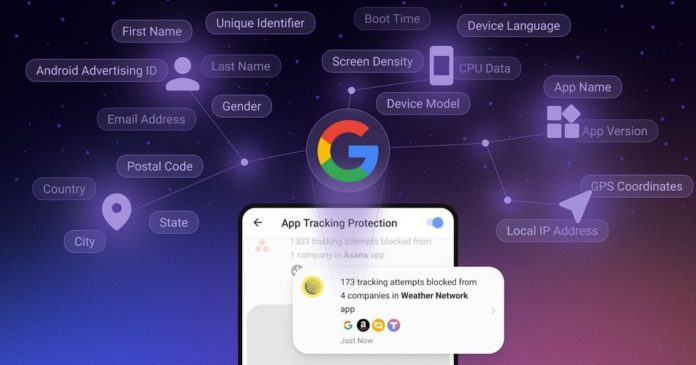 DuckDuckGo has recently launched App Tracking Protection for Android in open beta. The free feature, which is a part of the DuckDuckGo Android app, helps block 3rd-party trackers in the apps on your phone, which further translates to more comprehensive privacy and less creepy targeting. An example DuckDuckGo pointed out involves Google snooping in your weather app.

A similar feature is available on iPhones and iPads thanks to Apple’s App Tracking Transparency (ATT) feature that asks users whether they want to allow third-party app tracking or not in each of their apps. However, something like that is not available on Android until now.

DuckDuckGo’s App Tracking Protection will automatically block all the hidden trackers it can identify as blockable across your apps. And you know what? The original beta users have been surprised to see how many tracking attempts the feature is blocking, according to DuckDuckGo.

It is estimated that the average Android user has 35 apps on their phone. In its testing, DuckDuckGo has found that a phone with 35 apps can experience between 1,000-2,000 tracking attempts every day and contact over 70 different tracking companies.

The picture DuckDuckGo paints for us is gloomy. It shows that during a single afternoon, the user can start four apps like Southwest Airlines, Zillow, SeatGeek and Weather Network — and be a subject of data collection by more than 45 tracking companies.

The data these companies collect includes details such as your precise location, email address, phone number, time zone, and a fingerprint of your device (like screen resolution, device make and model, language, local internet provider, etc.) — which can be used to identify you.

With App Tracking Protection, you can now see exactly what the trackers are typically trying to collect and prevent them from doing so.

Once collected, this data is then used to build a profile that advertisers and content-targeting companies rely on to influence what you see online. The end result is rather spooky, and can feel like you’re being listened to. However, that is not the case — it’s just that your activity is being relentlessly tracked and analyzed.

But wait, there’s more… Your data is not only used to serve you “personalized” ads; it is also sold on an open market to other parties looking to put it through their own algorithms.

DuckDuckGo for Android can help protect you across search, browsing, and email — and now, they’re beefing up their offering with protection from 3rd-party app trackers.

How does App Tracking Protection work?

Once enabled, App Tracking Protection will detect when other apps on your phone are about to send data to any of the 3rd-party tracking companies in DuckDuckGo’s app tracker dataset and block most of those requests. And that’s it!

You can continue to use your apps as usual, with App Tracking Protection working in the background to block trackers whenever it finds them, even while you sleep.

Moreover, you will also get a real-time view of App Tracking Protection’s results — including which tracking network is associated with each app and what data they’re known to collect. If you have notifications on, you’ll also get automatic summaries if you want them.

Right now, there are a small number of apps being excluded because they rely on tracking to work properly, like browsers and apps with in-app browsers. Throughout the initial waitlist period, DuckDuckGo has reduced this number by half and also dropped the exclusion for games. It is now looking forward to reducing this list even more.

And you can help. To send them your feedback or report issues, go to the Settings screen of the DuckDuckGo app and tap “Share Feedback” in the Other section. ‌‌‌‌If you run into issues with another app on your smartphone as a result of App Tracking Protection, you can disable protection for just that app under “Having Problems With An App”. You’ll then be asked to give details of the problem you experienced. Your feedback will help further improve App Tracking Protection, and ultimately help protect privacy for every Android user out there.