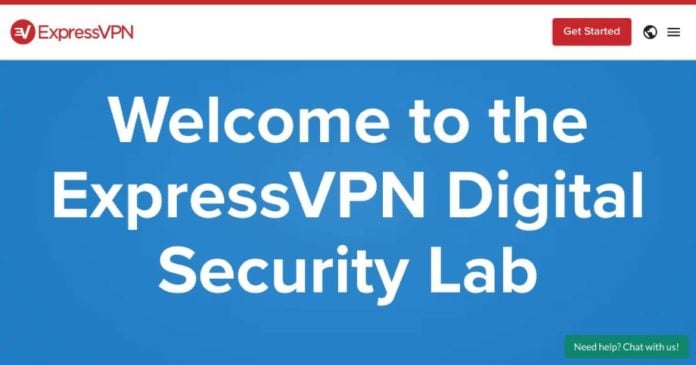 It was 11 years ago when ExpressVPN started offering its consumer VPN service, and today it is much more than that — advocating for internet rights and freedom — with the ultimate goal of building a safe, private, and open internet.

As part of that bold plan, the company is now launching the Digital Security Lab.

What will ExpressVPN’s Digital Security Lab do?

At the start, the ExpressVPN Digital Security Lab will focus on three main areas:

1. Investigating digital rights and security issues and educating consumers about them
Specifically, the Lab will focus on high-quality, original research in the areas of digital privacy, cybersecurity, access to knowledge, and information flows. The idea is to advance internet research to give the public a better sense of the current state of the internet, how to improve it for the future, and how they can better protect themselves. As part of that, ExpressVPN aims to simplify complex technical research so that it is accessible to everyone, and will publish the first research results in the next few months.

2. Creating tools and resources to empower individuals
In 2017, ExpressVPN released the open-source leakproofing tools to enable users, reviewers, and others to assess the quality of protection provided by different VPN apps. The Lab will provide more useful resources, tips, and tools available to anyone who wants to take better control of their digital privacy and security.

3. Conducting community outreach to share the Lab’s work
The research lab’s goal of discovering and building useful tools that can change consumer behavior cannot be achieved without strong awareness and education. Rather than let the good ideas gather dust, ExpressVPN wants the world to know about them. Disseminating the company’s work isn’t just the right thing to do, it also provides many important benefits to the end user.

Who will lead the Lab?

ExpressVPN announced that Sean O’Brien will be joining the team as a Principal Researcher to establish ExpressVPN’s new research center.

A fellow and affiliate of Yale and Oxford, Sean will conduct research for ExpressVPN full-time, while continuing to engage in scholarly work for the universities. He is an esteemed privacy and cybersecurity expert, and is best known for founding and leading Yale Privacy Lab. You may have read about his work in reports from the Associated Press, The Guardian, Wired, Fast Company, Vice, and many other outlets.

“ExpressVPN has long been an industry leader in consumer privacy and security, and I have always been a fan of their work,” Sean said. “I’m excited to bring my research expertise to further empower consumers with useful information about their digital rights and security.”

A word from the management…

“The launch of the Digital Security Lab is an important milestone for the company,” said Harold Li, Vice President, ExpressVPN. “We have ambitious plans ahead, and research helps us more deeply understand the threats people face online and how we can together better protect digital privacy, security, and rights. Ultimately, we think that will help us build a better digital future.”

ExpressVPN Digital Security Lab welcomes researchers, academics, developers, and others to join them in the effort to investigate and address the most challenging issues that could impact the future of the internet. If you’d like to collaborate or speak to ExpressVPN’s research team, please send them an email at digital-security-lab@expressvpn.com.

And if you don’t have a VPN already — or you don’t like your current solution — check out ExpressVPN, which is one of the top services out there. Hit the link below and take it from there.