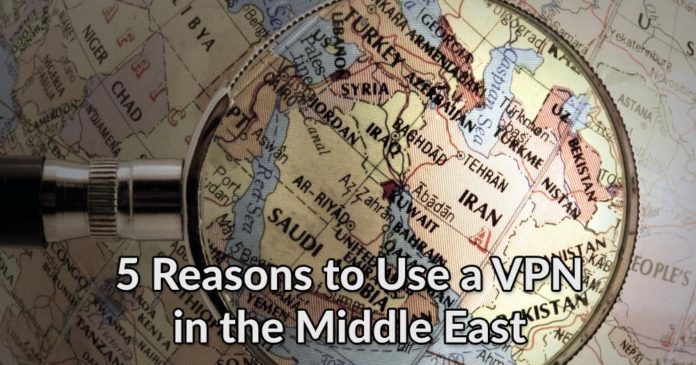 There are many incredible things to see and do in the Middle East, but there are also some caveats, Internet access being one of them. The fact that you won’t be able to enjoy the Internet as you want may make your local experience that much worse. That is except if you’re running a VPN on all of your devices — if that is the case, you will be able to keep accessing all the websites and services just like you were home (wherever that home happens to be).

But I’m getting ahead of myself, here are 5 reasons why you should use a VPN on your travels to the Middle East. And BTW, many (if not all) of these reasons also apply to those living in the region.

1. The Internet is restricted

Openness is not the most popular word in many countries in the region, with some of them topping the list of high-censorship countries. Among those are Saudi Arabia, Iran, United Arab Emirates and Turkey.

In some of these countries, you won’t be able to access all the sites you want, which may include popular social media services like Facebook and Twitter. In addition, some of the major media companies may also be blocked or at least parts of their websites that deal with “politically sensitive material” and provide content that is deemed “against the moral values.”

A VPN will help you get past these restrictions with ISPs — which impose restrictions — only seeing regular HTTPS traffic as you browse the web in its entirety.

This isn’t specific to the Middle East but to people all across the globe who want to, say, stream movies from US Netflix. Without a VPN, access to popular video streaming services may not be possible, or at the very least, the catalog of movies and TV shows is limited compared to the one offered in the US and the UK.

With a good VPN, you can connect to a US-based server and access the US-based Netflix, Disney+, Hulu and so on. Alternatively, those who prefer British content can access the BBC iPlayer with a VPN — they will just have to connect a UK-based server.

Related to the previous point, you will need a VPN in order to enjoy popular online games, including Call of Duty, Poker and many others. This is because many games are not allowed in some countries in the Middle East.

As an alternative, you may be forced to play with local players only, with ISPs blocking access to foreign servers — and consequently to foreign players.

With a VPN, on the other hand, you can connect to a far off server and play whichever game you want with whomever you want. It’s that freedom a VPN gives you, and which we love.

In addition to letting you watch, listen and read what you want, where you want – a VPN will also keep you safe(r) online. It does this on the fly as you browse the web, download files and so on. Since every web page you visit is routed through a VPN, its servers are able to clear it from any malicious code and deliver it back to you clean from any viruses, trojans and so on.

The same process keeps you safe when connecting to public Wi-Fi hotspots. Even if there are any hackers in the same room, they won’t be able to intercept your web traffic and potentially cause havoc by inserting malicious code. These are known as man-in-the-middle attacks and unfortunately – they are increasingly popular.

A VPN will protect you from these kinds of attacks by encrypting all web pages on their servers before returning them back to your computer, smartphone or tablet.

Related to the previous point, you wouldn’t want to access your online banking account from an insecure connection. There is no need to worry about that with a VPN. It will make sure every connection you make is secure and protected with military-grade encryption.

So when you want to access your online banking, fire-up your VPN app and only then do what you want to do with your money. This, BTW, has little to do with the Middle East and is our general advice we personally practice every time we need to access some sensitive information and/or service.

As we have said many times in the past, a VPN is a must-have tool for just about everyone. This is especially true for people living or traveling to countries with limited internet freedoms, to say the least. And yes, a few countries in the Middle East are on that infamous list. So before hitting the ground, make sure your laptop, smartphone and tablet all have a solid VPN app installed.

To get started, check out our list of Best of the Best VPNs, make your pick and take it from there. You’ll thank us later. 😉