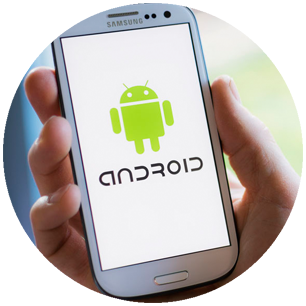 Getting a VPN service for your Android phone and/or tablet shouldn’t be hard. And you should demand only the best — after all, those will be your web whereabouts that could be screened by prying eyes. So you don’t want to save on a service that keeps you and your privacy protected.

All services in our list of best 5 VPNs for Android have millions of users and you can hardly go wrong by picking any one of them. But for the best overall experience, get the top service and forget about it. Let it do its magic in the background while you safely and securely browse the web, access streaming services, download files and so on.

So without further ado, here are the best 5 VPNs for Android you can buy today:

NordVPN not only shines on Windows and Macs, it also works well with Android devices.

The company's Android app is easy to use, delivering one of the fastest download rates on the market. Once started, you won't even notice that NordVPN is running on your smartphone (or tablet).

What makes ExpressVPN great on Android phones and tablets is the same thing that makes it great across the board — its consistent performance. We would love to be able to rely on other apps as much as we can rely on ExpressVPN for Android. It works every single time for both web browsing as well as for accessing popular streaming services such as Netflix and Hulu. The fact that you're traveling shouldn't prevent you from accessing your favorite shows.

On the downside though, ExpressVPN for Android doesn't have all security features found on desktop apps, such as a kill switch. Something's gotta give on the small screen, I guess.

Hotspot Shield could easily be the fastest VPNs out there with its proprietary technology helping the company deliver blazing-fast download AND upload speeds. Android users will love its mobile app that lets them enjoy buffer-free streaming (Netflix included), fast torrenting and so on.

IPVanish works flawlessly on Android, delivering some of the fastest download and upload speeds we've seen when connected to a VPN. Its app is not exactly the prettiest out there, but it gets the job done.

Also, chances are you are not using a VPN service exclusively on your smartphone and/or tablet, so we need to look at the bigger picture. IPVanish will keep your identity protected no matter which device you use, offering fast download and upload speeds, dedicated P2P resources and so much more.

Android is a free and open-source mobile operating system based on a modified version of the Linux kernel and other open-source software, designed primarily for smartphones and tablets. It was unveiled in November 2007, with the first commercial Android device launching in September 2008. Android is developed by a consortium of developers known as the Open Handset Alliance and commercially sponsored by Google.

Android’s source code has been used to develop variants of Android on a range of other electronics, such as game consoles, digital cameras, portable media players, PCs and others — each with a specialized user interface. Some well-known derivatives include Android TV for televisions and Wear OS for wearables, both developed by Google. Software packages on Android, which use the APK format, are generally distributed through proprietary application stores like Google Play Store, Samsung Galaxy Store, and Huawei AppGallery, or open-source platforms like Aptoide or F-Droid.

Android has been the best-selling OS worldwide on smartphones since 2011 and on tablets since 2013. As of May 2017, it has over two billion monthly active users, the largest installed base of any operating system, and as of August 2020, the Google Play Store features over 3 million apps.

There are a few dates worth knowing:

Why use a VPN with Android?

It is kinda obvious why would you want to hide your whereabouts from Google which effectively controls the platform no matter which company made the handset you’re using.

Google already knows a lot about us and is using that data to serve us more relevant ads — something that advertisers pay a premium for. These advertisers don’t get to know your personal information, but nevertheless – Google knows “what you did last summer” and then some.

In that sense, we not only advise people who don’t want to be followed online to use a VPN, but also to rely on some other search engine like DuckDuckGo which doesn’t have that much information about its users as Google does.

Beyond Android, you should…

Get a VPN for all your devices and needs

You (all of us, really) need a VPN for many things, not just Android. A good VPN will:

The top contenders that check all these boxes — while also working on Android devices — include the following: