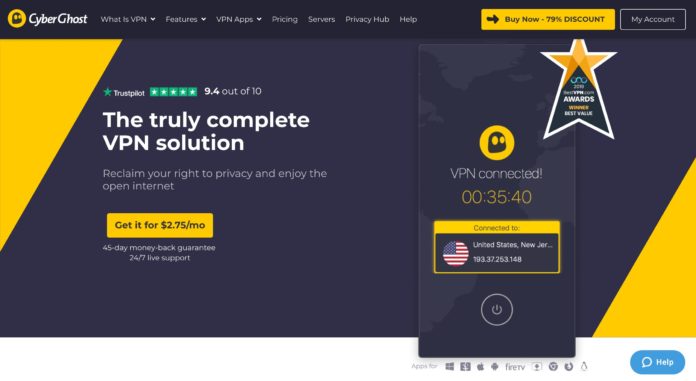 CyberGhost is one of the biggest VPNs in the world, which means we had to take it for a spin to test the bold claims for ourselves. Here's our review...

CyberGhost's network includes more than 6,000 servers, making it one of the largest on the market. Said servers are spread across 90 countries and 100+ locations, meaning that no matter where you want to connect to (or from) -- chances are, you'll find an appropriate server.

CyberGhost also offers a ton of IP addresses -- though we don't have the exact count -- meaning that your privacy is well kept with the service. In other words, every time you connect - you'll get a different IP address making it hard for ad networks and other actors to follow your whereabouts across the Internet.

Like that's the case with all major players -- and CyberGhost is one them -- a number of different devices and platforms are supported, including Windows, Mac OS, iOS, Android, Linux and there's also the option to set up your router to use CyberGhost's VPN service.

In addition, CyberGhost offers Chrome and Firefox extensions, though these act as proxies, rather than full-blown VPN services. When used in conjunction with the desktop app, however, you get the proper security and privacy features.

Furthermore, CyberGhost has dedicated apps for Amazon Fire TV and Android TV, while gaming consoles and streaming devices could be connected to a VPN by first setting up your router to sing along the service. Once that part is done, you can connect Apple TV, Chromecast, Nintendo, PlayStation, Roku, Xbox and other devices to a VPN service.

A single CyberGhost license lets you use it on up to 7 devices at the same time. That's kinda generous from a tier-one service and we can't help but love CyberGhost for offering that many simultaneous connections.

All those servers gotta count for something, and yes - CyberGhost is fast. Really fast... But... we've found it to lack consistency. Sometimes it was the fastest service we've tried and sometimes it was slower than expected. At all times, however, it provided enough speed to comfortably surf the web and enjoy video streaming services.

And the same goes for torrenting, though in most cases you don't need that much speed anyway, except if you're using Kodi. But even there, CyberGhost will have your back -- delivering the buffer-free experience every single time. That, at least, was our experience with a few popular TV shows we've tested the service.

To sum it up, for 99% of the users, CyberGhost will deliver great download and upload speeds.

CyberGhost is secure, have no doubts about it, with all of its VPN servers supporting multiple protocols -- including iKEv2, L2TP/IPsec, and our favorite - OpenVPN. Add the unbreakable AES-256 encryption to the mix, and you get a powerful ally to keep around your web whereabouts.

Also included is an automatic kill switch that will cut off your connection should it stops working (to hide your IP address), as well as DNS and IP leak protection. Plus, it's worth knowing that CyberGhost operates its own DNS servers, adding an extra layer of security to the mix.

CyberGhost has a strict no-logs policy, which goes in line with the company's co-founder Robert Knapp words: "The only way to secure your data is not to store it."

CyberGhost's website clearly states the following: "We have no idea what you do online after you connect to one of our servers, or how much bandwidth you've used. It’s none of our business."

There is one caveat, though. CyberGhost is an EU-registered company (it's based in Romania), which means it is obliged to store and share the data it collects with authorities (when they require them to do so). Then again, since CyberGhost doesn't collect any data, there's little the authorities could do even if they seize their servers.

The fact that it packs a ton of features doesn't mean CyberGhost is complicated to use. Quite the contrary, even tech newbies can benefit from the security and privacy CyberGhost provides; the service works out of the box with little to no setup required from the end-user.

Menus are clearly labeled and, if that's not enough, there are also handy contextual tooltips. Plus, let's not forget a number of demo videos on CyberGhost's website demonstrating the app's features.

Having seen other VPN apps, we have to add that CyberGhost is kinda heavy on the "screen estate" on computers. Whereas other apps occupy just a small portion of the screen, CyberGhost likes to "take over the screen." Some folks will like this, though. We prefer to have minimal interaction with a VPN, to start it and forget about it... Which to be fair is also possible with CyberGhost, once you select the desired server and press the connect button.

CyberGhost has put in an extra effort to make its website as resourceful as possible. It is bursting with comprehensive product and troubleshooting guides that are easy to understand. Also included is the vast FAQ section where you can most certainly find answers to any question you may have.

Last, but definitely not the least, there is the live chat support available 24/7 -- we've found it to be quite responsive, typically managing to answer our queries within minutes. This is the industry standard, though for some reason not all VPNs provide this feature.

When it comes to video streaming most people think of Netflix; they will be glad to know that CyberGhost has quite a few dedicated Netflix servers, and we haven't heard anyone complaining he/she couldn't get their dose of House of Cards or Stranger Things due to CyberGhost's inability to sing along the popular streaming service.

The situation can be different with BBC iPlayer, for which CyberGhost also has dedicated servers, but it's not working at all times -- we had to try a few servers before getting to one that worked for us. So perhaps you're better off getting some other service for BBC.

For all other streaming services, CyberGhost is a companion you can trust. It will work with Amazon Prime Video, Hulu, HBO, Sky, PlayStation Vue, and others.

Torrenting with CyberGhost is somewhat limited; it will work only on Macs and Windows PCs, though -- then again -- this is how most users are getting their files with BitTorrent. Perhaps more limiting is the fact that torrenting won't work in all countries. This is due to legal reasons, with some countries forcing providers to block torrent traffic -- among them USA, Russia, Singapore, Australia and Hongkong (China).

Luckily, there's an abundance of other servers to choose from, and more importantly, a dedicated profile called "Torrent Anonymously." Once activated, it will turn on the most reasonable settings to speed up and protect your downloads, connecting you to a P2P compatible server while keeping malware websites at bay. Also, it abstains HTTPS requests in order to stay compatible with download managers that don't support this protocol.

Simply put CyberGhost is not the best solution for bypassing the Great Firewall of China. It can work but you can't rely on it on a daily basis -- if you live or work in China, you're better off getting some other VPN.

The same is true for other high-censorship countries -- such as Saudi Arabia, UAE, Syria, Iran and Egypt -- where VPN traffic could be blocked or slowed down significantly.

Elsewhere, you shouldn't have any problems accessing popular US-based services, which in part is due to CyberGhost's servers in Africa and Asia.

Good to know... Every year, CyberGhost releases its Transparency Report highlighting the number of legal requests it received during the past year. Generally speaking, the company receives three major types of legal demands: 1) DMCA complaints from from various law firms indicating that copyrighted material was illegally shared via a CyberGhost IP; 2) Malware Activity Flags that come from website owners or app developers and have to do with DDoS, botnets, scams, log-in attempts, or automated emails being sent from CyberGhost IPs; and 3) Police requests. As CyberGhost has grown so has the number of all three types of demands. In 2018, the company received 27,747 DMCA complaints (up from 15,819 in 2015), 11,116 Malware Activity Flags (up from 4,895 in 2015), and 37 Police requests (down from 71 in 2015). Guess the police figured out they can do little with CyberGhost's data (cause there is none).

As we have briefly noted above, a single CyberGhost license lets you connect up to 7 devices at the same time, which is an impressive feat in itself.

Also as part of the deal, you get a server-based ad blocker that will remove pesky ads before serving the page -- which means less data is transmitted and could thus be important on mobile devices.

And it's not just ads CyberGhost will remove from pages -- it will also block any malicious content and tracking code snippets it finds as you browse the web.

Use a drop-down menu to compare CyberGhost with other VPNs.

CyberGhost accepts most major credit cards, as well as PayPal and Bitcoin. It doesn't work with some international options like Alipay or UnionPay.

CyberGhost lets you test out its service before paying a single dime. The free trial offer is good for just one day, but even that is much better than what most services offer. Also it doesn't require you to input your credit card information.

In addition, and here's the cool part, the money-back guarantee is good for full 45 days! Again, that's more than what other services are offering.

There is a caveat, though; this guarantee applies only to subscriptions of six months or longer, with single-month subscriptions featuring a 14-day guarantee. That's still cool, we think.

You can use CyberGhost on just about any device imaginable -- including computers, phones, tablets, game consoles, streaming boxes and even routers.

The included security and privacy features are excellent, with CyberGhost only logging non-identifiable information as part of its plan to monitor and continually improve the service. We like it. A lot.