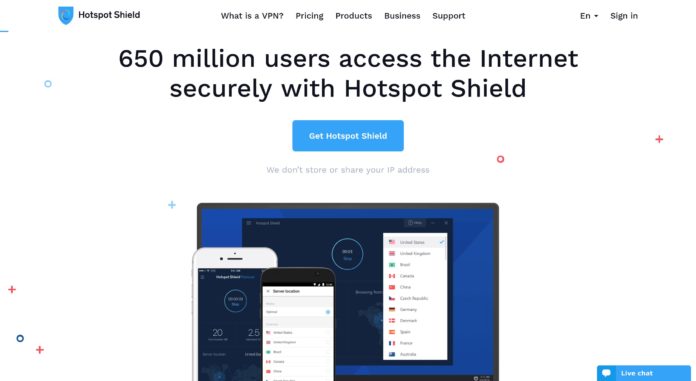 Hotspot Shield offers a rather interesting service that relies on its own technology to deliver the blazing fast experience, all while keeping its users' identities under the radar. As such, it has managed to get us some of the fastest download and uploads speeds despite operating a mid-sized network of servers. Here's what's Hotspot Shield all about...

Hotspot Shield operates a mid-sized network, with its servers residing in almost 100 locations across more than 70 countries. From the list on its website, we see that servers are well spread out, with about two dozen servers in the U.S. alone -- making Hotspot Shield great for anyone looking to access websites and services that are available exclusively to U.S. residents.

The company also provides over 2,500 individual IP addresses, which at first glance isn't much; however, the fact that some users will have the same IP address makes them harder to identify and follow around by governments and sneaky corporation who can't help but keep collecting the data on all of us.

Hotspot Shield offers apps for all popular platforms -- namely Mac OS, Windows, iOS and Android. Linux app is not available whereas router support is available but not easy to set up. Streaming boxes and gaming consoles are also not supported though if you manage to make your router sing along Hotspot Shield, you will also be able to "cover" these devices, as well.

Browser extensions, on the other hand, are available and are -- like the main app -- super-easy to use. Hotspot Shield works with Chrome and Firefox browsers.

A single license lets you run Hotspot Shield on up to 5 devices, and at the end of the day -- you may not need to set it up on your router at all.

A few screenshots of Hotspot Shield in action are below, including the installation screens which we had to take since they rock.

Hotspot Shield is one of the fastest VPN services out there, with pretty much all servers we've tested delivering fast download and upload speeds, as well as low latency times. Whether you need a VPN for streaming, torrenting or gaming -- you'll find that Hotspot Shield can work for you.

Since the company doesn't have more servers than some competing services, this speed has everything to do with strategically selected server locations and Hotspot Shield's proprietary protocol. More on that in a moment.

In any case, if the connection speed is you primary criteria for selecting a VPN service, you won't go wrong with Hotspot Shield. It will deliver every single time.

Instead of using standard protocols such as OpenVPN, Hotspot Shield opts for its own, proprietary Catapult Hydra protocol. You can't even change it to something else.

While that may sound somewhat limiting, it is worth knowing this same VPN protocol is integrated by 70% of the world's largest security companies (i.e. McAfee, BitDefender, and Cheetah Mobile) as well as a number of global telecommunication companies (like Telefonica and KDDI), and has passed numerous security audits. Also, it is this technology that makes Hotspot Shield one of the fastest VPNs on the market.

What you need to know is that Hotspot Shield uses the unbreakable AES-256 encryption which is also employed by the likes of NSA for secure communication. The software also has a VPN kill switch, and protects users against IPv6 and DNS leaks.

Hotspot Shield is not a zero logs service, but it doesn't collect too much information either. It will keep your IP address for the duration of your session but it is: a) encrypted and b) not linked with your activity while using the VPN.

In addition, upon opening the app -- but before connecting to the VPN -- it will collect device-specific information, such as the unique mobile ID, hardware model, OS version, language, and network information. This data will reportedly help the company improve its service and perform analytics; also, it can hardly lead to Hotspot Shield identifying you as an individual user.

The most important information you need to know is that no no user activity is logged - ever; Hotspot Shield even proves this with its annual Transparency Report that shows the number of data requests it receives from authorities -- only to tell them there's nothing they could get from them. Love it.

Chances are Hotspot Shield's apps are among the easiest to use, and even the complete newbies will have no trouble installing them on their phones and computers. On the other hand, the same simplicity may leave advanced users craving for more options to play with. The company believes its own protocol is the best thing out there and the default setup leaves little room for advanced settings. For what it matters, most users like this "set it and forget it" way with little to no additional features to turn on and off; everything works out of box.

In addition to dedicated desktop and mobile apps, Hotspot Shield also offers browser extensions for Chrome and Firefox, which are equally easy to use. Just install them on your computer, log in and let them do the magic in the background. Again, it's that easy.

The first thing we check with any VPN service is whether it offers a 24/7 live chat support; and we're glad to report that Hotspot Shield does provide one. What's more, we were pleased to learn that this level of support is also available to both paying customers and non-customers -- those who may be thinking to pay for the service. This is super cool.

Speaking of level of support -- we've got some well-informed responses from the support team. That, we have to repeat, is kinda expected given the fact that Hotspot Shield apps are among the easiest to use.

The situation is different when it comes to the provided knowledge base - it is not on par with what other top VPN providers are offering though you will find answers to most commonly asked questions and be able to resolve 90% of the problems (presuming you ever stumble into one). Nevertheless, we would like to see more content there and can only hope this part is still being developed.

Streaming rocks with Hotspot Shield with all services we've tried providing a zero-buffering experience. This was true with Netflix, Hulu, HBO and BBC iPlayer. So if you're looking for a service that will help you get your fix of "House of Cards" or any other popular show - you won't go wrong with Hotspot Shield.

Furthermore, you won't have to hassle with server selection -- like which server works best of Netflix or BBC -- Hotspot Shield will do this part for you. Love it and again - we probably have to thank Hotspot Shield's Hydra protocol for this "magic." And would love other services to copy how this works - browsing around different servers just watch one TV show is a hassle. Hotspot Shield guys and gals know this and are actually doing something about it.

Similarly to streaming, torrenting also works out of the box; there is no need to select a server that is specialized for P2P traffic, with all servers letting you download and upload files via BitTorrent. You can expect fast download and upload speeds, and also enjoy a buffer-free streaming experience via Kodi (which works via BitTorrent). Again, we love how this works.

Hotspot Shield doesn't work in high-censorship countries, such as Pakistan, Iran, Oman, Qatar and China. So if you are looking for a VPN that will work in these places, you will have to a get different service.

This is sad considering that Hotspot Shield used to be relied on for bypassing government censorship during the Arab Spring protests in Egypt, Tunisia, and Libya. I guess the same Hydra protocol that makes Hotspot Shield so fast is also easier to detect by the authorities, making the service useless in high-censorship countries.

Good to know... Unlike most other VPNs, AnchorFree -- the company behind Hotspot Shield -- raised a serious amount of money to expand to new markets and reach even more customers. In fact, it has managed to attract more than $350 million in venture funding from investors -- including Goldman Sachs, RENN Capital, WndrCo, SignalFire, Green Bay Ventures, Accel and 8VC. This, we think, speaks volumes for AnchorFree as it has been able to prove major corporations that its solution rocks. And that solution, as we've already mentioned, relies on AnchorFree's proprietary Catapult Hydra protocol, which also happens to be used by large cybersecurity companies such as McAfee, BitDefender, and Cheetah Mobile, among others. Additionally, a few major telecoms like Telefonica and KDDI also use Catapult Hydra to provide VPN services and Wi-Fi security to their customers. It is thanks to this protocol that Hotspot Shield is able to provide superior performance with a lower number of servers.

Unlike all other major VPN service providers, Hotspot Shield has a free version of its product. There is a catch though -- first, you'll get ads in return. Also, unlimited bandwidth is not included in this package, and at some point -- your protection will stop working. While it does work, you will benefit from the same military-grade encryption paid customers benefit from -- which you won't get anywhere else for free.

I guess by offering a free service Hotspot Shield wants to help more users first try out its service and only later get a paid (Premium) product -- which, in case you wonder, we highly recommend.

Use a drop-down menu to compare Hotspot Shield with other VPNs.

Hotspot Shield accepts all major credit cards as well as PayPal, but it doesn't let you pay with cryptocurrencies.

The service frequently runs promotions offering 7-day free trial after which it automatically renews at 1 month price. To get a better deal, you're better off subscribing to one- or a three-year plan, the latter of which will get you an amazing deal. Hotspot Shield also offers a generous 45-day money-back guarantee.

Hotspot Shield runs promotions offering a 7-day free trial of its service after which the service automatically renews at a 1-month price. To get a better deal, you're better off subscribing to one- or a three-year plan, the latter of which will get you an amazing price. There is also a generous 45-day money-back guarantee.

Hotspot Shield accepts all major credit cards as well as PayPal. Cryptocurrencies are not supported, though.

As that's typically the case with most VPN services out there, the longer you commit - the better deal you get. However, what makes Hotspot Shield even better is the fact that it offers a 7-day free trial of its service. A few other top VPN providers do the same. Plus, its money-back guarantee lasts for 45 days, making for a risk-free purchase. Cause, you can always get your money back. Sweet and just the way we like it.