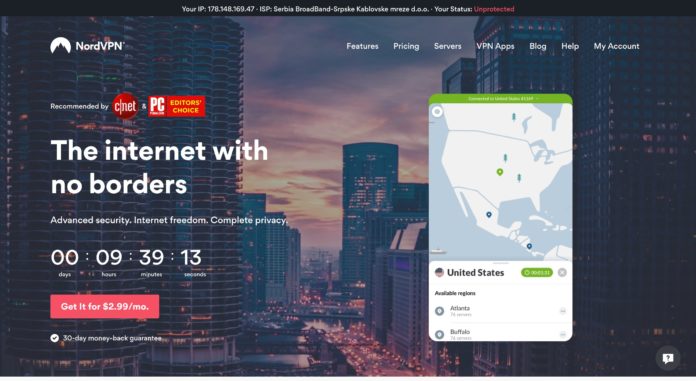 NordVPN has been around for quite some time, garnering some fancy awards along the way. So we decided to take it for a spin, to see what's it all about and whether the raving reviews are true or... You get the point. Let's get started...

NordVPN operates one of the largest networks of servers among VPN providers. It counts more than 5,000 servers spread across over 60 countries.

The server list is well organized, which is important considering the sheer number of servers. You can either browse servers in the "list view" or select the one on a map. Whichever way you select, you'll be connected in just a few minutes or less. Or, if you're really in a hurry, simply click/tap the "Quick Connect" button and let NordVPN connect you to the server it thinks is best for you.

For those looking to use a VPN for specific services -- i.e. specialty servers -- there are P2P (for torrenting), Obfuscated, servers offering a dedicated IP address, and those with support for Double VPN -- all easily accessible from the menu.

NordVPN engineers have put in an extra effort to make their software work everywhere, and I mean - everywhere. The NordVPN app is available on Windows, macOS, Linux, Android, iOS, and Android TV. Also, there are browser extensions for Chrome and Firefox, though when used alone they don't deliver all the features of the full desktop app.

In addition, advanced users could also make an older computer running Windows XP setup to work with NordVPN. And the same goes for BlackBerrys, some routers and Raspberry Pi devices.

Speaking of which [devices], a single license lets you run NordVPN on up to 6 devices!

Below you can see a few screenshots we've taken to give you an idea how NordVPN looks like in the "real world." Yes, it is easy to use and we like how well polished its apps are.

The sheer availability of servers on so many locations directly translates into amazing download and upload speeds. In fact, most users won't even notice that a VPN app is running in the background, with fast servers around the globe delivering timely responses.

Unsurprisingly, the closer you are to a server, the faster download and upload speeds you'll get. So if you're trying to connect to some site from your work or school and will make connections within the same country, you may not experience any slowdown at all.

The situation is different when connecting to far off servers on the other side of the planet. It is only natural that some delay is expected with your data traveling around the world before reaching your computer (or phone).

Nevertheless, you will still be able to "get the job done," whether that "job" involves torrenting, browsing the web anonymously or accessing some video streaming service. That's the good thing with top services like NordVPN - they tend to deliver consistent speeds.

NordVPN relies on the Advanced Encryption Standard (AES), which is used and approved worldwide by governments, cybersecurity experts, and cryptography enthusiasts. It uses AES with 256-bit keys, which is recommended by the NSA for securing classified information, including the top secret level. So yes, your data is in secure hands.

Actually, NordVPN won't keep your data (more on that in a moment) but will make sure it travels through its servers in a highly secure way. This, in case you wonder, is extremely important when connecting to public Wi-Fi hotspots which tend to attract hackers looking for an easy pray -- and that pray typically means people not securing their online data with a VPN.

In addition to using the top cipher for encrypting the data, NordVPN also comes with the kill switch capability that halts all internet traffic if the VPN stops working properly. As part of the deal, you get one kill switch for web browsing and a separate one for specific apps (think: BitTorrent or some dedicated app you may use for work).

NordVPN doesn't keep any logs. Period. And it's not just their claim -- cause, let's face it, everyone can say that -- they hired PwC to "check them out" and they have proven this no-log policy to the world.

For what it matters -- and it's actually a big deal -- NordVPN is based in Panama, which is an advantage over some other services operating from countries where regulation requires service providers to keep their logs. NordVPN doesn't have to comply with such regulations and is thus able to deliver on its zero-logs policy.

In most cases, it's "set it and forget it" with NordVPN. The service works out of the box. Simply install the app, start it, and let NordVPN do its magic in the background.

If you, however, want to use NordVPN for torrenting or need a dedicated IP address, you are better off selecting one of the specialty servers for those purposes. The list of those servers is just a click/tap away -- so again, it's a no-brainer and just the way we like it.

Some video streaming services are changing their rules and you may have to change servers from time to time, but that's just life. The likes of Netflix are fighting VPNs and VPNs are fighting back all the time. So if a problem occurs, just change the server and get back to business as usual.

NordVPN prides itself with great support and we have nothing but the words of praise for it. We've tried them with a few questions and were pleasantly surprised by the speed of their answers. The live chat support is available round the clock, meaning that whenever you experience a problem -- and that rarely happens with NordVPN -- there will be someone to address the issue. Just start the chat and get your answers.

We should also add that we've read people experiencing problems with NordVPN's support. As noted above, we had an opposite experience, but who knows. NordVPN has millions of customers and chances are they can't please everyone.

If you need a VPN for streaming, NordVPN should be at the top of your list. We've tested it with a few of the popular streaming services -- including Netflix, Amazon Prime Video, Hulu and HBO -- and it worked every single time. We have also read reports that you can use it with BBC iPlayer and Sky, but weren't able to test it ourselves.

In all our tests we've got an expected buffer-free experience which didn't come as a surprise. Streaming of a full HD video, after all, requires speeds less than 5Mbps. If you need a 4K streaming, you may have to play around to find the best server for that. Again, for local connections, that won't be a problem but it could be if you're on a vacation in Japan or Australia and want to watch some Netflix show in 4K. Perhaps you're better off going for full HD instead. Or you can try a few different servers.

Downloading (and uploading) files via BitTorrent is easy with NordVPN by selecting one of the servers from the "P2P" list. These are optimized for peer-to-peer traffic, making sure you get fast download and upload speeds.

Once connected to a P2P server, you can fire-up your favorite torrent client and grab all the files you want. No additional settings are required in BitTorrent, with NordVPN routing all data through its servers to keep your identity (and what you're doing) under the radar.

NordVPN works in China, but not for everyone -- at least not "out of box." We weren't able to test it out, but from what we've understood - some people had a great experience right off the bat, whereas others had to manually select the right server in order to get around the Great Firewall of China. The important thing is that they've succeeded at the end.

In addition, NordVPN will also work in other countries where your freedom to access the Internet could be questioned. From what we've understood -- again, we haven't been able to test it out -- the service works in Russia, Iran, Qatar, and the UAE. You may experience some issues, but those are easily solved by selecting a different server.

There is an ongoing battle between authoritarian regimes and VPN providers, and at some point, few NordVPN servers may be blocked. The company then adds new servers to its network and for the time being - the problem is solved.

NordVPN is also offering what it calls the "Emergency VPN" service to journalists and NGO activists living and working in high-censorship countries. Said service is free for 6 months during "extreme cases of censorship or online privacy violations," helping users bypass restrictions and access the Internet anonymously.

Good to know... In November 2018, NordVPN announced that one of the Big Four accounting firms had performed an independent audit of its no-log policy. At that time, the company hasn't named the auditor but has later (in February 2019) shared that it was the Swiss branch of PricewaterhouseCoopers (PwC). According to the publicly shared information, the audit report confirmed that the company did not store personal IP addresses nor keep a log of internet activities of its subscribers.

Something extra comes with every NordVPN license - you get a complimentary ad blocker (the so-called CyberSec feature). The service will do you a favor by blocking pesky ads from the sites you love and make for a that much better experience. For one thing, you won't be seeing YouTube ads! I love it and can't believe NordVPN included ad blocker in its product -- since I am personally paying for such service separately.

In addition to hiding ads, CyberSec will also protect your security from malware, phishing and other threats.

Use a drop-down menu to compare NordVPN with other VPNs.

NordVPN is available in multiple sizes and, obviously, the longer you commit - the better price you'll get. In addition to credit cards, you can also pay with your cryptocurrency. PayPal, which used to be an option, is no longer available.

A free trial option is not available but there is the 30-day money-back guarantee. This is fairly common with VPN providers as many people (wrongly) buy a VPN just to use it while on vacation (so they could keep their access to Netflix).

We say wrongly because we think everyone should be using a VPN all the time... except maybe when connecting to their local/home network if they are certain it is well protected. Hackers are on the lookout for your data, and it is up to you to protect it -- and yes, you need a VPN for that.

Before getting you your money back, NordVPN says a troubleshooting attempt will be made first. For what it's worth, we haven't read that many people struggling to get their money back, though we like the no-question-asked policy more.

Its network includes more than 5,000 servers spread across 60 countries, which directly translates into faster speeds. NordVPN is also very secure, relying on the strong 256-bit encryption combined with secure VPN protocols (OpenVPN and IKEv2/IPSec). But as a user, you get a seamless experience with all this technology "doing its thing" in the background.

NordVPN is well suited to pretty much every task you throw at it -- whether it's accessing a banned site from some country that filters out the internet, torrenting, accessing streaming services, or just wanting to keep a low profile on the web. It also doesn't keep any logs.

We highly recommend NordVPN to anyone looking for a reliable service.