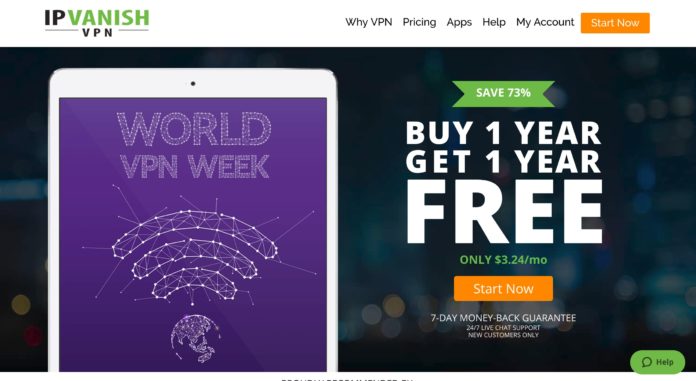 IPVanish promises secure connections for every devices; also included are great download and upload speeds, and more. Here are all details...

IPVanish operates over 1,400 servers across more than 80 locations in around 60 countries. While there are VPNs with more servers and locations, only a few have more IP addresses -- IPVanish has over 40,000 of them, making sure that whenever you connect - you'll get a different one. Also, all these IP addresses will make it easier for corporations and governments to track down any individual user.

In addition to usual places in North America and Europe, the company also has server locations in some less common countries such as Moldova and the Philippines. All in all, IPVanish has a well spread out network with one big exception - South America, with most servers on the continent residing in Brazil. There is always room for improvement, I guess.

IPVanish works on computers, smartphones and even routers. The last option allows you to protect your home or office network, and thus every device that connects to the Internet through your router. And if you're not sure how to use your device with IPVanish, you are free to consult the ever-handy walkthroughs online to help you along the way.

On the downside, there aren't any browser extensions on offer though we see the option for Chromebooks, so I guess Chrome is covered as well. In any case, once you turn on VPN on your Mac or a Windows PC -- it will "take care" of any traffic coming to and from your browser.

When it comes to other devices like gaming consoles and streaming devices, only the Amazon Fire TV Stick has its own dedicated solution. For the rest, you'll have to set up your router or connect to the Internet through your computer running IPVanish. That may not be a perfect solution but it definitely gets the job done.

A single IPVanish license provides unlimited simultaneous connections (on multiple devices). You can see how the service works in real life from a few screenshots below...

IPVanish can be super-fast, but the experience is not consistent. When you find a great server, you'll be amazed -- though moving huge files while being connected to the "wrong" server could be a pain. For streaming though, you won't notice any hiccups as full HD streams don't require much bandwidth in the first place.

Uploads can also be impressive and for one reason or another are more consistent than downloads. This, in turn, makes IPVanish a good option for torrenting.

We have found the fastest connections with servers in North America and Frankfurt, and not so fast while connecting to servers in Australia and Japan.

Again, for the majority of users, IPVanish will get the job done with little to no fuss to deal with.

IPVanish is super secure, relying on the proven OpenVPN protocol while encrypting data using the AES-256 cipher -- this is the same encryption used by the world's intelligence agencies like NSA. A kill switch is also included to keep your IP address hidden should your connection drops.

IPVanish also supports other protocols -- including IKEv2, SSTP, L2TP and PPTP -- though we always opt for OpenVPN.

Also, there are many advanced tweaks that most users, like 99%, won't even use -- cause there is really no need for that. On the other hand, these will make the service that much better for true geeks.

Finally, the company promises no IP or DNS leaks.

IPVanish does not keep any logs on its servers. Period. Not even anonymized data -- they literally don't store a single piece of information that could lead to its users.

In a way, as a US-based company - they have to do this since the government could force them to access their data. If that happens, the government would be surprised to find out nothing gets stored.

The situation was not always like that -- under the previous management, IPVanish did collect some logs and was at one point forced to hand them down to US authorities. Luckily, things have changed with new management, and as we've already said -- it will not record any of your activity or connection data while using their apps.

Like all other big players, IPVanish is easy to use, though the design of its desktop apps leaves room for enhancements. To put it bluntly, these are not exactly the pretties apps around (check the screenshots above).

Nonetheless, most users will start IPVanish once and forget about it, while those looking to tweak things left and right will find the options galore for advanced privacy settings. The nice thing is that all these options are explained in plain English (or another language that works for you).

Finally, when it comes to the installation process -- it is as straightforward as possible, taking only a few minutes from start to finish. And if you're having problems, you can consult IPVanish's website to access easy-to-grasp set-up guides for most popular devices. Chances are you won't be needing these, but it's good to know they are ready just in case you need them.

This used to be an issue with IPVanish -- earlier it didn't provide round the clock support, but that has been changed in the meantime. Now, whenever you need to resolve some issue -- or have some question -- a friendly customer service agent will assist you via chat 24/7. This, in case you wonder, is the industry standard with most top-tier VPNs offering the same level of support.

An email option is also available and so is the comprehensive FAQ section offering solutions to the most common issues. You can browse through the "Support Section" or easily search for answers from the big search field at the top.

IPVanish works with Netflix with most US-based servers letting you get your dose of Stranger Things and other popular Netflix shows -- as well as all other content provided from Netflix's vast catalog. Also, it will sing along Hulu, HBO, Amazon Prime Video and other US-based providers.

The problems could appear if you're trying to access BBC iPlayer. We've had a hard time making it work, so if this is your video network of choice -- you are better off getting some other VPN.

IPVanish's website says you can also use the service to stream various sports events, and unfortunately, we weren't able to test this out. We did read a few IPVanish reviews and couldn't find many complaints from users across the web.

We know that Kodi rocks with IPVanish, which leads us to the next section...

IPVanish is one of the best VPNs for torrenting, having invested significant resources towards P2P (peer-to-peer) traffic. All of its servers support torrenting, which -- as we've noted above -- is great news for Kodi fans.

The service delivers fast download AND upload speeds, which are hard to match by other VPNs. We love IPVanish for that and we're sure other frequent torrent users will love it just as well.

IPVanish doesn't work in China. Period. They don't even hide it. If you are looking to access popular social media sites from the world's most populous country, you can't rely on IPVanish and will rather have to use some other service.

We like the honest approach but at the same time, we are sorry for not being able to recommend IPVanish to anyone frequently traveling -- let alone living -- in China.

The situation is different in other countries where freedom of speech can be limited -- you should be able to use IPVanish it there, though you may have to deal with the manual setup process, connecting to IPVanish servers' IP addresses instead of server names. It can be a hassle, but it will work.

Good to know... IPVanish was named as "one of the best gaming VPNs" by the IGN. During a speed test of the VPN with League of Legends, the reviewer noted a ping drop of just one millisecond. That's an impressive feat every gamer will appreciate... Another field of excellence for IPVanish is torrenting and especially for using the Kodi media streaming app for which the company provides an integrated plugin to improve its speed (and thus, the overall experience).

We wanted to emphasize the number of IP addresses IPVanish provides - at 40,000 of them, it has one of the biggest pools of IP addresses on the market. An impressive feat that will make sure you always get a different address when connecting through a VPN. This will also make it next to impossible for corporations to track your digital footsteps online.

Another feature that we like is the so-called "OpenVPN Scramble" that is used to counter blockade of some firewalls which can detect OpenVPN connections and terminate them. This feature ensures that no one messes with your privacy.

Use a drop-down menu to compare IPVanish with other VPNs.

IPVanish sits somewhere in the middle -- it's not the most expensive, and also not the most affordable option. You can pay for the service using all popular credit cards, as well as via PayPal. Cryptocurrencies are not accepted. Free trial is not available, but there is a 30-day money back guarantee.

IPVanish offers a 30-day money-back guarantee that is 100% no-questions-asked. From the moment you ask for a refund, you'll get your money within 10 working days.

The problem, however, is when you're signing up for the service via the Apple Appstore when you don't qualify for the money-back guarantee. So you know how to get IPVanish - through the link provided on this page. ;)

IPVanish is fast and especially great for torrenters and Kodi fans. It also works with Netflix though the situation is different with BBC iPlayer -- for which we've had a hard time finding a reliable server.

When it comes to pricing, IPVanish is somewhere in the middle -- it's not the most affordable option but also not the most expensive one. As noted, it will be most appreciated by heavy BitTorrent users, and -- related -- Kodi fans.