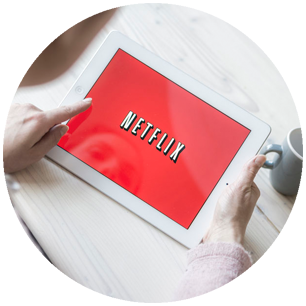 Accessing Netflix is one of the most common questions we get. Because of the content rights, Netflix is not the same all around the world, and in some countries — it is not even available. And so smart folks are using a VPN to get their Netflix fix all while bypassing local content restrictions.

The good news is that these days Netflix works with many VPNs; the bad news is that not all VPNs get you the best possible experience. What you want is buffer-free streaming and for that – you need a really good service.

So we had to check all VPNs to get to those that are best suited for Netflix. Also, we took into account other factors, cause chances are — you will also be using VPN for other things. And so our list of best 5 VPNs for Netflix was born.

Without further ado here’s the mentioned list with best 5 VPNs for Netflix:

NordVPN is one of the best services for accessing Netflix that tends to work out of the box! Also, you'll get a super-fast, buffer-free experience — which is what most users want and expect these days.

ExpressVPN is one of the best VPN services for Netflix. It's not only reliable — it consistently worked across a few dozen tests — it is also very fast. Which means we've got the buffer-free experience every single time. And we have to respect that.

IPVanish works with Netflix, it's that simple. There are better services for accessing the popular streaming service out there, but that doesn't mean IPVanish can't be relied on.

The situation is different with BBC iPlayer and we've had a hard time finding the server we can reliably use.

Founded in 1997 by Reed Hastings and Marc Randolph in Scotts Valley, California – Netflix is a subscription-based streaming service that offers online streaming of a library of films and TV series, including those produced in-house. As of April 2020, Netflix had over 193 million paid subscriptions worldwide, including 73 million in the United States. It is available worldwide except in mainland China, Syria, North Korea, and Crimea (due to U.S. sanctions).

Initially, Netflix was a DVD sales and rental company. It entered the content-production industry in 2013, after debuting its first series – House of Cards. And that was just a start, with the company releasing an estimated 126 original series and films in 2016, more than any other network or cable channel. All this has helped Netflix become the largest entertainment/media company by market cap in July 2020.

The birth of Netflix and its DVD business

Netflix launched in 1997 as the world’s first online DVD-rental store, with only 30 employees and 925 titles available, which was almost the entire catalog of DVDs at the time. The company started with the pay-per-rent model, with rates and due dates similar to those of Blockbuster.

The monthly subscription concept was introduced in September 1999; Netflix has built its reputation on the business model of flat-fee unlimited rentals without due dates, late fees, shipping and handling fees, or per-title rental fees.

In 2000, when Netflix had just about 300,000 subscribers and relied on the U.S. Postal Service for the delivery of their DVDs, they were losing money and offered to be acquired by Blockbuster for $50 million. The proposition was that Netflix, which would be renamed as Blockbuster.com, would handle the online business, while Blockbuster would take care of the DVDs, making them less dependent on the U.S. Postal Service. The offer was declined.

Netflix posted its first profit during the fiscal year 2003, earning $6.5 million profit on revenues of $272 million. In 2005, 35,000 different films were available, and Netflix shipped 1 million DVDs out every day.

For some time, Netflix had considered offering movies online, but it was only in the mid-2000s that data speeds and bandwidth costs had improved sufficiently to allow customers to download movies from the net. The original idea was a “Netflix box” that could download movies overnight, and be ready to watch the next day. By 2005, movie rights were acquired, and the box and service were designed. However, after discovering YouTube, the concept of using a hardware device was scrapped and replaced with a streaming concept instead, a project that was completed in 2007.

And so in February 2007, Netflix delivered its billionth DVD and began to move away from its original core business model of DVDs, by introducing video on demand via the Internet.

At the start, it offered no more than about 1000 movies and TV shows, just 1% compared to its more than 100,000 different DVD titles. Yet as the popularity kept growing, the number of titles available for streaming was increasing and had reached 12,000 movies and shows in June 2009.

In January 2013, Netflix reported that it had added two million United States customers during the fourth quarter of 2012, with a total of 27.1 million United States streaming customers, and 29.4 million total streaming customers. By September 2014, Netflix had subscribers in over 40 countries, with intentions of expanding their services in unreached countries. By October 2018, Netflix’s customer base reached 137 million worldwide, confirming its rank as by far the world’s biggest online subscription video service.

Why do you need a VPN to watch Netflix?

In most cases, you don’t need a VPN to watch Netflix as the service is now available all across the world. There are, however, some places where that is not possible like China, Syria, and a few other countries. Also, some schools and universities may ban access to entertainment websites and services like Netflix.

But, it’s not that simple. Because of the way content rights are bought and sold on the international market, users in different countries have access to a different catalog of Netflix movies and TV shows. Most of us would like to access US Netflix and for that – we need a VPN.

Yes, Netflix tries to block the usage of VPNs but the best services can get around their filters. So you’re best off getting a VPN that has proven to work with Netflix — while also delivering other benefits. Which leads us to the next section…

You need a VPN for many things, not just for accessing Netflix. A good VPN will:

The top contenders that check all these boxes — while also let you access Netflix from anywhere — include the following: