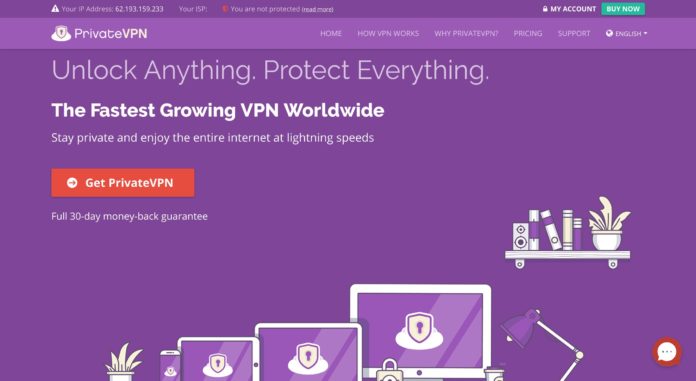 PrivateVPN may not have the biggest network out there, but it gets the job done -- allowing users to cyber-schmooze while keeping their identities hidden from the prying eyes. Here's our review of PrivateVPN...

PrivateVPN's network isn't the biggest one out there, but it gets the job done. Currently, it counts more than 150 servers spread across 60 locations, while offering 7,000+ individual IP addresses to keep your identity protected.

Nonetheless, we haven't read that anyone is experiencing network congestions or slowdowns -- we certainly haven't noticed any glitches -- so you're good to go.

Sure there are VPNs with much bigger networks, but bigger isn't always better. PrivateVPN has its strengths as you're about to find out.

PrivateVPN has an app for all popular desktop and mobile platforms, and -- if that's not enough -- you can set up your router to use the service so that every device in your local network gets protected.

Unfortunately, browser extensions are not available, though that doesn't mean you will be "left alone" while browsing the web -- the desktop app will kick-in to route traffic to and from all websites you visit.

Amazon Fire TV Stick has its own app and for all other gaming consoles and streaming devices, you will have to connect to the internet through your router or computer -- which you have previously set to work with PrivateVPN. Not a big problem, as far as I'm concerned.

A single license lets you connect up to 6 devices at the same time. And yes, in case you wonder, one of those devices could be your router.

Despite having a relatively low number of servers, PrivateVPN is fast. Perhaps that has something to do with their server locations or the "kind" of servers they are using.

The company prides itself for purchasing High Quality Network (HQN) Internet capacity directly from IP transit providers. Whereas some VPN providers purchase Internet capacity mostly from a hosting company, PrivateVPN tries to get the majority of traffic from HQNs -- which in turn allows it to be fast and deliver low latency connections (something gamers will appreciate).

In any case, we have found connecting to both local and long-distance servers to deliver fast download AND upload speeds. Pretty cool and extremely useful for all kinds of users -- whether you need a VPN for torrenting or streaming, PrivateVPN will get the job done for you.

PrivateVPN supports a number of protocols, including our favorite OpenVPN that is coupled with the unbreakable AES-256 encryption. This combo is supported by most of the top VPNs across the world -- cause it works.

There are many advanced features tech savvy users will appreciate, with the majority of us just starting the app and forgetting about it. Cause it gets the job done.

PrivateVPN operates its own DNS servers, promising little to no DNS or IP leaks. The service also includes a kill switch to keep users safe if their connection drops, and could easily be used for Tor.

Unfortunately, though, Android and iOS apps are missing the kill switch. For one reason or another, this is fairly common with all VPNs.

PrivateVPN says it "doesn't collect or log any traffic or use of its service" and we tend to trust them -- after all, a single story on the internet proving otherwise could put them out of business.

The company is based in Sweden, which means it is the subject of EU's data retention laws and intelligence-sharing agreements. Then again, PrivateVPN's zero-logs policy means that even if they are subpoenaed to provide access to their data to authorities - they would have nothing to offer. In other words, there's nothing to worry about with PrivateVPN.

PrivateVPN's app is minimalist and we like it for that. Most users -- myself included -- would simply start the app and forget about it, with PrivateVPN's software doing all the hard work in the background.

The UI and colors could be, let's say, different. We like the mobile apps more than their desktop counterparts. This is not to say that PrivateVPN apps are ugly, they could just -- well -- use some additional polishing. In other words, we have seen a nicer looking VPN apps.

It is worth adding that everything within PrivateVPN's apps -- both on mobile and desktop -- is clearly labeled and you shouldn't have any problems finding your way around all those options.

Should you need to access advanced options, they are just a click away. Again, most users wouldn't bother to try them out -- except if something suddenly stops working -- i.e. they have to change the server in order to access some streaming service.

The only problem could be the lack of integrated support, which means that if you have a question or problem - you will have to visit PrivateVPN's website to get your answer(s). Which leads us to the next section...

The live chat help is available through PrivateVPN's website but it's not perfect. The chatbox will appear in either red or green depending on availability. If it's not available, you can use an online form to send your inquiry and let the support folks get back to you with an email.

Also, you could check PrivateVPN's online resources and its FAQ section where answers to most common questions are provided, and which -- let's face it -- could be used for resolving 95% of all inquiries or more.

Finally, and this is really cool, PrivateVPN offers free remote help AND installation. We haven't been able to test out this feature, but boy - it does sound cool. We seldom see something like this provided by any software maker and we're already in love.

If you need a service for video streaming, PrivateVPN is one of the best around. Yes, it works with Netflix, as well as other popular services like Sky and Hulu -- all of which have dedicated servers.

And the same goes for BBC iPlayer - it too is available through a couple of servers though not as many as Netflix. That kinda makes sense considering the popularity of Netflix.

For sports fans, PrivateVPN suggests DAZN that lets users watch most leagues of most sports, including the Champions League for football (soccer) and the NFL. The company claims that not all VPNs support this service, so I guess that's (literally) one more point for PrivateVPN.

Plus, if you're wondering which server is best for the video streaming service you want to use -- just ask the customer support. We've found this to be the fastest way to get ahead with streaming especially if you're looking to access some of the less popular services.

As we have briefly noted above, PrivateVPN offers a rock-solid experience for torrenting, with all of its servers supporting P2P traffic. This, in turn, also makes PrivateVPN a great choice for using Kodi -- which streams media files via BitTorrent.

While testing the service we haven't noticed any hiccups in performance -- both download and upload speeds were impressive. And the same went for Kodi streams of the popular TV shows - everything worked "as advertised."

PrivateVPN works in China, and consequently in all other countries where you need to access popular social media services and news sites which may be blocked by the government. In fact, the company promises you won't be noticing much (if any) difference in the speed of connection since most of their internet capacity comes from IP transit providers -- which deliver faster connections.

In addition, PrivateVPN also provides support for Tor over VPN for those looking for an extra layer of security.

Good to know... PrivateVPN is one of just a few services that can still bypass the Great Firewall of China. That's not a small feat considering that some VPNs with a much larger network of servers can't do that. The company does this with its "Special Stealth" mode that you should turn on while visiting China as well as other high-censorship countries like UAE, Saudi Arabia, Iran, Turkey, Russia and so on. With PrivateVPN, you will be able to keep up with your friends and followers on Facebook and Twitter from anywhere. You gotta cheer for the little guy especially when he manages to deliver where (some) "big boys" can't.

While discussing PrivateVPN's support, we have noted that the company offers what it refers to as "Free Remote Help + Installation." We haven't been able to test this out, but it definitely sounds promising, with the company's support staff taking an extra step to offer hands-on help for users who have a hard time setting up their VPN.

So should you have some problems with PrivateVPN, their people could actually connect to your computer and solve the problem for you; not just provide with an answer or -- worse -- a link to the guide on how to solve the issue. Love it!

Use a drop-down menu to compare PrivateVPN with other VPNs.

PrivateVPN accepts most major credit and debit cards, PayPal, Bitcoin as well as a few international payment methods such as JCB, Discover and DCI.

The service offers a 30-day money-back guarantee but you have to use less than 100GB of data in the period. A free trial is not available.

Like most top services out there, PrivateVPN doesn't let you test its service for free -- cause it cost them real money. Instead of the free trial, they offer a 30-day money-back guarantee for all users. There is one condition though -- during those first 30 days, you should use less than 100GB of data. That is not unreasonable as far we can tell, allowing you to stream a lot of TV shows and movies before deciding to pay for the service.

Should you need a refund, it will be processed within five business days.

Customer support may not be on par with bigger players but it's not like you should experience much problems anyway. You will get the same level of security and privacy as with other services, and a single license will let you run PrivateVPN on up to 6 devices. Pretty cool.