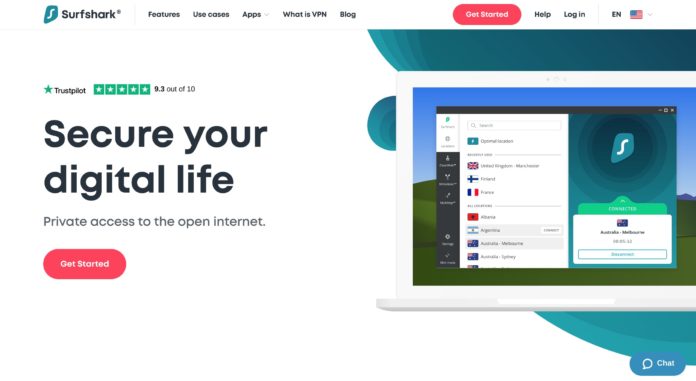 Surfshark promises fast speeds and secure environment, propelled by its vast network of servers spread across the world. We take a deep dive in this article...

Surfshark operates around 1040 servers spread across more than 60 countries -- which, the company claims, should be more than enough to deliver fast download and upload speeds for its users.

These servers, however, are not equally spread across the globe with just a few being located in Africa and the Middle East. Specifically, in this region(s) - Surfshark has servers in Israel, Libya, South Africa, Turkey and the United Arab Emirates. That, however, is not necessarily bad since most users end up requiring (and thus connecting to) servers in Europe and North America.

Surfshark emphasizes that it has a private DNS on each server -- which is an important feat security-wise.

Surfshark has all of the major mobile and desktop platforms covered -- including Windows, Mac OS, Linux, Android and iOS. And if that's not enough, you can configure your router to work with Surfshark. If you're not sure how to set the service on any of those platforms, you can consult easy-to-grasp online guides that will get you up and running in just a few minutes.

Surfshark is also offering browser extensions for Google Chrome and Mozilla Firefox, and a native app for Amazon Fire TV Stick. For streaming boxes and gaming consoles -- i.e. Xbox, Playstation, Apple TV, etc. -- you can either use Surfshark's Smart DNS feature or connect those additional devices through the previously configured router.

The coolest part is that Surfshark doesn't pose any device limits, letting users protect all of their computers, phones and other devices at once. Yes, this means that you can install Surfshark on as many devices as you want/need.

Surfshark may not be the fastest VPN around, but it's not a slouch either. Simply put, top VPNs are faster, but Surfshark tends to be more consistent than some other services we've tested.

Speaking of tests, we have experienced the fastest download speeds when connecting to London-based servers, followed by servers in the U.S. Longer distance connections are not bad either, and will keep you torrents running round the clock. And the same goes for video streaming since it's not really a bandwidth-demanding activity, except if you stream 4K videos.

Surfshark uses IKEv2/IPsec as a default protocol on all of its apps while providing an option to change to OpenVPN -- which we prefer (though even IKEv2/IPsec will "get the job done").

Whichever protocol is selected, it will be paired with the unbreakable AES-256 encryption to keep your personal information secure. The company also promises no DNS or IP leaks, which we were able to confirm in our tests.

A kill switch feature is provided to kick in should your connection drops -- so that your IP address remains hidden.

Additionally, we should also mention a few unique features Surfshark is offering, including MultiHop -- which lets you connect to multiple servers at once to "to take ID protection and footprint masking to a whole other level", and Camouflage Mode -- which makes sure that even your internet provider can't tell that you're using a VPN. Pretty cool.

It knows only a few things about you like your email address, which is required to register your account, and billing information -- and even that could be skewed if you pay for the service with cryptocurrency.

Surfshark's apps are both fancy, modern and easy to use. Due to their minimalistic design, you may even think it lacks some capabilities -- but you would be wrong. Advanced features with all the fancy bells and whistles are just a click or tap away; they are nicely grouped and clearly labeled, allowing even the newbies to easily get around all the different options.

The server selection screen has three options: Locations, Static (servers offering a static IP address) and Multihop (for servers compatible with this feature). If that's not enough, you can also search through the list of servers and add some of them to your favorites list -- so you can, later on, more easily connect to them.

Most users, however, will just install the app, start it and forget about it -- with Surfshark encrypting the data in the background. For what it matters, this is the way we use a VPN (except when we're testing different services).

Surfshark provides 24/7 chat support which we have found to be working "as advertised"; the answers were prompt and knowledgable. We must add that we've read reports of users waiting for a few minutes to get their answers; we were pleased to say that our experience was different in a positive way.

You can also send your questions via email or consults the content-rich Help center. Here you will find tutorials, guides, FAQs and so much more. All the content is searchable making it easy to find appropriate answers.

This, of course, presumes you stumble on a problem and, honestly, we doubt that will be the case. Surfshark's apps are among the most polished ones and the service is as seamless as possible -- and as it should be.

Surfshark is a reliable companion for everyone looking to use a VPN to access video streaming services such as Netflix, Hulu, HBO and even BBC iPlayer. The company also emphasizes that its software is great suited for streaming live sports events and we have no reason not to trust them.

It promises you won't suffer from buffering and will be able to "watch your matches in HD, without annoying pop-ups." In case you wonder, this is how we roll -- with no ads to interrupt our binding. ;)

Surfshark automatically routes all P2P traffic through servers optimized for torrenting. For instance, in Europe - those would be servers in the Netherlands; and for users in the Americas - the traffic flows through Canadian servers.

In both cases, Surfshark promises that you "won't get big speed drops." We did get some cool numbers but we also have to add that there are better/faster services out there.

That being said, if torrenting is what you're getting a VPN for - you won't go wrong with Surfshark. It will "get the job done" (and then some) without breaking the bank.

Surfshark can help you bypass censorship but it's not the best VPN for the task.

It works best with the Windows app that comes with "NoBorder Mode" built-in. For other platforms -- Mac OS, iOS and Android -- you will have to download a specially configured file from Surfshark's website in order to be able to access the blocked content from China.

We haven't read similar reports for other countries -- and we weren't able to test the feature ourselves -- so we presume it works in other parts of the world without any special setup. Bypassing the Great firewall of China, after all, is the trickiest of the tasks for any VPN.

Nonetheless, we advise you to get a different VPN service if you live or work in a country where the authorities could limit your web whereabouts.

Good to know... Surfshark provides a few additional services to protect your privacy even when you're not using a VPN. One of those services, HackLock, will scan the web & alert you if your email is leaked. This way you can prevent the possible damage before it's out of control. A different feature, called BlindSearch, lets you search privately with no ads or logs, providing you with "unbiased and organic results within milliseconds." Cool.

Surfshark is bursting with extra features, one of which -- called CleanWeb -- lets users "surf in clean cyber ocean" with no ads, trackers, malware and phishing attempts.

We have already mentioned MultiHop, using which you can connect to multiple servers at once, and the Camouflage Mode that makes sure that even your internet provider can't tell that you're using a VPN. There is also the Whitelister option which lets you allow specific apps and websites to bypass the VPN. This, in case you wonder, is handy for mobile and online banking apps which may require local connections.

Finally, lets not forget the fact that Surfshark doesn't pose any limits on the number of devices you could use it on. It's not 3 nor 6 -- if you have 20 devices, you can install it on all of them. Pretty cool.

Use a drop-down menu to compare Surfshark with other VPNs.

Surfshark accept all major credit and debit cards, as well as PayPal and Google Pay. Also, those looking for extra anonymity will be glad to know they could use their cryptocurrency to pay for the service -- namely Bitcoin, Ethereum and Ripple... Included with every purchase is a 30-day money-back guarantee.

Like most VPNs, Surfshark doesn't provide free trial and is rather offering a 30-day money-back guarantee. You won't be asked for a reason why you decided to cancel your subscription which is just the way we like it. Heck, you can ask for your cash back "even if you're 100% satisfied." That's a kind of guarantee we prefer. ;)

You can rely on it for streaming and torrenting, with included extra features like CleanWeb and MultiHop, delivering a that much better -- and more secure -- experience.