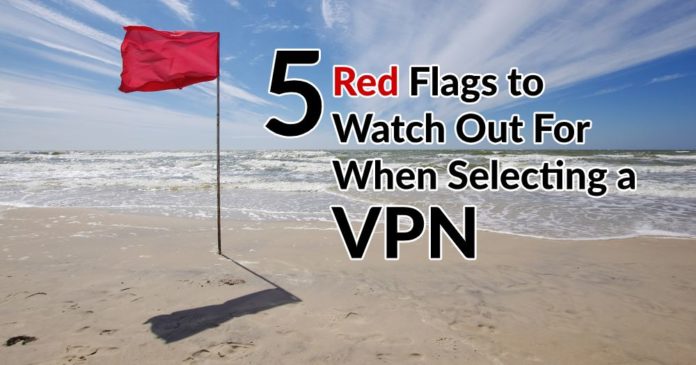 You may have heard what you should look for in a VPN — the good stuff — but what about deal breakers? Do you know what are the red flags that should prevent you from getting one VPN (over another)?

That’s the point of this article, to highlight the factors that should tell you the VPN you’re considering may not be the best for you. Here are what we deem are 5 red flags to watch out for when choosing a VPN:

When it comes to VPNs — and many other things in life for that matter — free is not always the best price. Quite the contrary, it’s the worst.

As the saying goes, if the product is free — you are the product. That’s how Google and Facebook make their money, and while that setup is working perfectly for them, not everyone likes the fact that these two giants know a ton about every one of us.

The situation is similar with free VPNs – if they don’t charge for the service, chances are they are collecting users’ data so they could sell it on the market. And that kills the point of a VPN — which is there to give you more privacy.

Also, it has been found that some free VPNs have also included malware, causing havoc for those who installed these apps.

A good VPN should come with a money-back guarantee. This is the way for a VPN service to say it is all about quality and this is also a way for you, the user, to test their service out. Yes, you will have to pay some fee (subscription) upfront, but you should also be able to get your money back in case you don’t find the service to work for you.

A few VPNs offer free trial — cause it costs them real money to run their service — but we are not putting the “free trial” option in our must-have requirements. Otherwise, we would miss some of the world’s best VPNs. And that’s not the point.

Whereas most VPNs claim to be zero-logs compliant, only the best services put an extra effort to actually hire a third-party auditor to test their claims. Some of these auditors are well-known companies that are putting their name and prestige behind such claims and we like that.

So before signing up for a VPN, make sure to research the Internet and VPN’s own website to look for the “traces of audit.” If a company did an audit, chances are it will brag about it. Cause that’s what users want to hear/read — that the VPN they’re looking to buy is indeed a reputable company.

Not all services offer AES-256 encryption, which is a shame. And that, in case you wonder, should be an industry standard.

For those who haven’t heard of it, AES-256 is also dubbed the “military-grade encryption” and is used to secure communication in major corporations and government agencies dealing with sensitive (top secret) information.

The good thing is that the same level of encryption is available for you and me, and since it’s available – we should strive to get it; especially when we know that AES-256 comes included with all of the best VPNs.

This could be tricky as you may not be able to determine whether some VPN will get the job done for you right from the bet. For instance, you may first start using a VPN to watch US Netflix and only later turn it into a business tool to securely connect to your office network while traveling abroad.

So, during the first month of the service, try multiple situations with a VPN by connecting to both nearby servers as well as those located on the other side of the planet. You never know where life will take you, and you do want to be prepared as much as possible. No one wants to deal with slow download and upload speeds. And during your first month with a VPN, you should try to determine whether it is reliable enough to be used from all across the world.

Try accessing different services, check how it works with BitTorrent and see whether your web browsing becomes (much) slower. Factors like these matter even in the short term and with today’s best VPN services offering great user experiences, there is no need to settle for less. Or so we think.

Read next: 5 Tips for Choosing a VPN