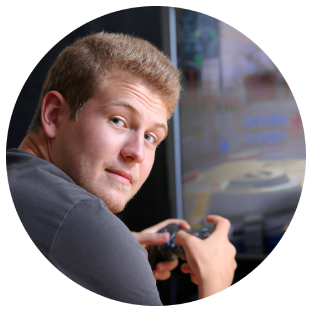 Not all VPNs work well for gaming; in order to get the right VPN for online gaming, you need to understand the term “latency” — it refers to the delay typically incurred in the processing of network data. A low-latency network connection is one that experiences small delay times, while a high-latency connection suffers from long delays.

What you want to get is a VPN with low latency so that every character in the game moves in real-time. Also, you need a VPN that delivers fast download and upload speeds; and, as noted above, not every VPN is well suited for this task.

No reason to worry as we have tested many, many different VPNs to find the one that is best suited for every situation, online gaming included. That being said, you’ll still want to get a VPN that is also capable of delivering other capabilities — such as buffer-free streaming, torrenting and so on. With that in mind, here are the best VPNs for online gaming, that are also good for other purposes:

NordVPN is well suited to pretty much every task you throw at it — whether it's online gaming, accessing a banned site from some country that filters out the internet, torrenting, accessing streaming services, or just wanting to keep a low profile on the web. It also doesn't keep any logs.

ExpressVPN is one of the best VPS services on the planet. There are a few others that come close — and even outshine ExpressVPN in some specific segments — but as far as the majority of users are concerned, this is the best VPN service they could sign-up for. It is also a great choice for online gaming.

Hotspot Shield could easily be the fastest VPNs out there with its proprietary technology helping the company deliver blazing-fast download AND upload speeds. In fact, it is among our top choices for streaming (Netflix included), online gaming and torrenting, and is equally suited for desktop and mobile users.

IPVanish is fast and especially great for online gaming. It also works with Netflix though the situation is different with BBC iPlayer — for which we've had a hard time finding a reliable server.

When it comes to pricing, IPVanish is somewhere in the middle — it's not the most affordable option but also not the most expensive one. The VPN will be most appreciated by heavy BitTorrent users, and — related — Kodi fans. As well as "heavy gamers."
5

You can rely on it for online gaming, streaming and torrenting, with included extra features like CleanWeb and MultiHop, delivering a that much better — and more secure — experience.

As you probably already know, an online game is a video game that is either partially or primarily played through the Internet or any other computer network. Online games are ubiquitous on modern gaming platforms — such as PCs, consoles and mobile devices — and span many genres, including first-person shooters, strategy games and massively multiplayer online role-playing games (MMORPG). Online games are also big business with global revenues reaching $16.9 billion in 2019 — $4.2 billion of which came from China and $3.5 billion from the United States.

Most online games feature components such as leaderboards and online communities, which in some cases, can integrate the players’ existing real-life communities.

Online games have attracted players from a variety of ages, nationalities, and occupations. The online game content can also be studied in the scientific field, especially gamers’ interactions within virtual societies in relation to the behavior and social phenomena of everyday life. It has been argued that, since the players of an online game are strangers to each other and have limited communication, the individual player’s experience in an online game is not essentially different from playing with artificial intelligence players.

There are a few different types of online games, including:

First-person shooter game (FPS)
The birth of this genre took place during the 1990s when online games started to move from a wide variety of LAN protocols and onto the Internet using the TCP/IP protocol. Doom popularized the concept of a deathmatch, where multiple players battle each other head-to-head, as a new form of an online game. Since Doom, many first-person shooter games contain online components to allow deathmatch or arena style play. As games became more realistic and competitive, an e-sports community was born. Games like Counter-Strike, Halo, Call of Duty: Advanced Warfare, Quake Live and Unreal Tournament are popular with these tournaments. Also, the expansion of hero shooters, a subgenre of shooter games, happened in 2016 when several developers released or announced their hero shooter multiplayer online game (Battleborn, Overwatch, and Paladins).

Real-time strategy game (RTS)
Like FPS games, real-time strategies also started during the 1990s when the software was developed to allow players to tunnel the LAN protocols used by the games over the Internet. By the late 1990s, most RTS games had native Internet support, allowing players from all over the globe to play with each other. Popular RTS games with online communities have included Age of Empires, Sins of a Solar Empire, StarCraft and Warhammer 40,000: Dawn of War.

Multiplayer online battle arena game (MOBA)
A specific subgenre of strategy video games referred to as multiplayer online battle arena (MOBA) gained popularity in the 2010s as a form of electronic sports, encompassing games such as the Defense of the Ancients mod for Warcraft III, League of Legends, Dota 2, Smite, and Heroes of the Storm. Major esports professional tournaments are held in venues that can hold tens of thousands of spectators and are streamed online to millions more. A strong fanbase has opened up the opportunity for sponsorship and advertising, eventually leading the genre to become a global cultural phenomenon.

Battle Royale games
A battle royale game is a genre that blends the survival, exploration, and scavenging elements of a survival game with last-man-standing gameplay. Dozens to hundreds of players are involved in each match, with the winner being the last player or team alive. Some notable examples include PlayerUnknown’s Battlegrounds, Fortnite Battle Royale, Apex Legends, and Call of Duty: Warzone — each having received tens of millions of players within months of their releases. The genre is designed exclusively for multiplayer gameplay over the Internet.

MUD (multi-user dungeon)
MUDs are a class of multi-user real-time virtual worlds, usually but not exclusively text-based, with a history extending back to the creation of MUD1 by Richard Bartle in 1978. MUD were the direct predecessors of MMORPG.

Why do you need a VPN for online gaming?

It is rather simple – online gaming is banned in many places such as workplaces, schools, universities, and even some countries. Also, in order to participate in some online games (or tournaments), it could be required that you are connecting from a certain country/region.

But that’s not all, a good VPN will also protect your computer from unwittingly participating in or becoming a victim of distributed denial of service (DDoS) attacks — which can happen during the online tournaments, with tech-savvy gamers using DDoS for competitive advantage either to slow other users down or shut them out of the game completely.

In a DDoS attack, multiple computers start flooding your IP address with trash data to overwhelm your network. A good VPN can absorb a lot of attacks and if that doesn’t help, well – you simply connect to a different server.

Finally, with a VPN you get to avoid bandwidth throttling which can happen if your ISP doesn’t like online gaming. It will show the regular HTTPS traffic to the ISP which, in turn, will not be able to do much about it.

You (all of us, really) need a VPN for many things, not just for online gaming. A good VPN will:

The top contenders that check all these boxes — while also letting play games on the Internet — include the following: