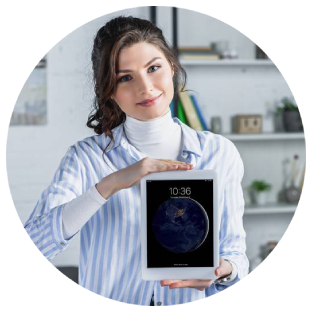 Getting a VPN service for your iPad shouldn’t be hard. And you should demand only the best – after all, those will be your web whereabouts that could be screened by prying eyes. So you don’t want to save on a service that keeps you and your privacy protected.

All services in our list of best 5 VPNs for iPad have millions of users and you can hardly go wrong by picking any one of them. But for the best overall experience, get the top service and forget about it. Let it do its magic in the background while you safely and securely browse the web, access streaming services, download files and so on.

So without further ado, here are the best 5 VPNs for iPad you can buy today:

The original device, which used to run the same OS as the iPhone – iOS, was announced on April 3, 2010 and has ever since made a history.

Today, users can choose between the “regular” iPad, iPad mini, iPad Air and iPad Pro — with or without cellular connectivity. There are optional keyboards you can buy for your iPad, as well as pencils for those requiring more precise drawing.

Why do you need a VPN for iPad?

As an Internet-connected device, what you do on an iPad could be leaked. Specifically, an intrusion to your data could happen when you are not connecting to a secure network or when you’re not accessing a secure website (HTTPS).

At those times, a tech-savvy malicious actor could snoop into your traffic, potentially getting ahold of your personal information. These, so-called “man in the middle” attacks have been growing in popularity in recent years, and are especially common in public places (and spaces) offering free Wi-Fi.

With a VPN running on your iPad, you don’t have to worry about any of that, with the VPN app doing the hard work in the background. And that hard work involves encrypting all data flying between your iPad and the Internet. This way, even if someone manages to intercept your traffic, he/she will not be able to decipher it — they’ll get random code they can do little with (if anything).

Another thing to consider is when you travel to other countries and would like to keep access to video streaming services like Netflix and Disney+. Because of the way the market is structured, they won’t let you get your movie fix from abroad — except if you first connect to your iPad to a VPN server in your home country. Then, the likes of Netflix won’t have a clue that in reality, you are in some other place and will let you in.

Finally, when you run a VPN on your iPad, you get to circumvent various restrictions that may come your way. We’re talking about places like schools & universities, workplaces and — most notably — high-censorship countries, where IT admins are giving their best to block people from accessing the Internet in its entirety.

That being said, you shouldn’t get a VPN only for your iPad; rather, you should…

Think beyond your iPad – get a VPN for everything. You’ll want the one that works for:

The bottom line is – get a VPN for all your needs. The top contenders (which also work with your iPad) include the following: