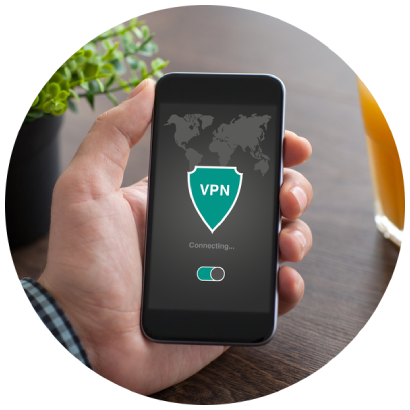 It is not just your computer that can/should run VPN software — your smartphone could also benefit from a VPN app.

Heck, since most of us use smartphones more than computers, we would argue it is even more important to have a VPN app running on your smartphone than on any other device.

But which VPN should you get?

It doesn’t have to be that hard – and so we have prepared a list of what we deem are the Best VPNs for Mobile. Check them out:

Why use a VPN on your mobile?

We would think it is common sense to have a VPN running across your devices but we do understand that some folks are skeptical as they may think that yet another app could slow down their experience. We’re happy to say that won’t be the case, plus we’re giving you 5 reasons why you should get a VPN for your mobile:

Although it is common knowledge that public Wi-Fi hotspots aren’t as secure as one’s home or office network, people still use them. And there’s nothing wrong with that as sometimes it could be your only way to access the Internet, like when traveling to other cities and countries.

Without a VPN, everything you do online is visible to the hotspot operator and could be used against you. Like that’s not enough, a malicious party could also be connected to the same Wi-Fi network and snoop into your web traffic to potentially cause havoc. These so-called “man in the middle” attacks are on the rise.

A VPN running on your smartphone will encrypt all data coming to and from your mobile device and the rest of the Internet — thus making it impossible for anyone to snoop into your traffic.

Your mobile operator knows everything you do online, and the same goes for Google and Facebook — which tracking pixels are placed on millions of sites across the web.

However, with a VPN running on your mobile device, your mobile operator and tech giants won’t have a clue of your web whereabouts — except when you tell them so (i.e. you check-in somewhere on Facebook). You get anonymity, which is, unfortunately, a luxury these days, even though VPNs are not expensive.

A VPN gets you that anonymity by routing all traffic between your phone and the server (website) you’re visiting, with that site owner thinking that your IP address and location is the one of a VPN server. Also, it can remove all tracking code while showing regular HTTPS traffic to your mobile operator. This process gets you back your privacy.

Another reason to use a VPN is to bypass firewalls in high-censorship countries. The most infamous of which, the Great Firewall of China, blocks the local population from accessing global media organizations as well as social media services such as Facebook, Twitter, Instagram, YouTube and so on — as well as some VoIP services like Skype.

Unfortunately though, China is not the only place with limited access to the world wide web. There are a few other countries where people use VPNs to bypass these artificially placed barriers to be able to find out what’s happening in their own backyard. Or just to be able to watch the latest music video, keep up with friends on social media, enjoy a Netflix show, and so on.

With a VPN running on your smartphone, the world is your playground no matter where you happen to be at any given moment.

This one’s similar to the previous point but also very different.

A similar part stems from the fact that part of the Internet could be blocked for you without using a VPN. The difference is that this time the culprits are in the West where you would think you can get all the freedom you want.

The main reason why you can’t access some content is related to the intellectual property, with (mostly) streaming service providers buying rights for certain TV shows only for specific geographies, promising not to allow anyone else (outside of those regions) to access that content.

As a result, you may not be able to access your own Netflix account from another country. Except, again, if you’re using a VPN — which you should first use to connect to a server in your country and only then start the Netflix app.

This, in case you wonder, is how people from all around the world are signing-up and watching movies and TV shows from the vast US Netflix catalog. And the same goes for other popular services such as Disney+, HBO MAX, Hulu and so on.

You may have noticed how the prices of some products and services change during a single day?

This is especially the case with airline tickets, which seemingly have a different price every time you visit the site of an airline, Expedia or some other site.

This, so-called dynamics pricing, has been put into place by the travel industry to get the maximum amount of money from travelers, using our potential interest in purchasing some tickets as a benchmark for the price of the moment.

For example, try searching for a flight between New York and Los Angeles on one airline a few times during the day. Chances are you’ll see how the price keeps growing and sometimes — this increase is hard to justify. The airline’s software has detected your interest in buying that ticket and is now checking to see how much you’re willing to spend. So it will dynamically be raising prices to entice you to buy-in sooner rather than later.

With a VPN, however, the airline doesn’t stand a chance as you could change your virtual location (connect to a different server) a few times during the day, and it will always see you as a new customer — thus getting you the best deal.

And the same could be said for some special offers that are reserved for people living in certain locations – with a VPN, you get to benefit from such deals, as well.

Hopefully, we have helped you decide to get a VPN for your mobile device, but that is only a part of the equation. The best idea is to…

Get a VPN for all your devices!

Remember that a VPN can also work on your tablet, smart TV and even router when your entire home or office network gets to benefit from a more secure connection. A good VPN will:

The top contenders that check all these boxes — while also working on mobile devices — include the following: