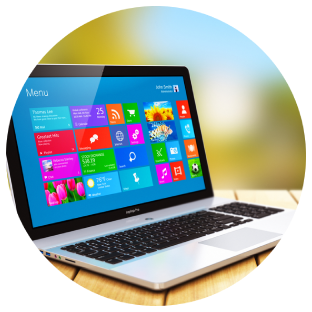 We tested more VPN services than we care to count. This means you don’t have to test all of them to find the one that is best suited for your PC.

With a VPN app running on your PC, you will be able to hide your online activity, stream Netflix from virtually anywhere, download files via BitTorrent anonymously, encrypt and protect private data from cybercriminals, bypass censorship rules, and much more. So yes, you should sign-up for a VPN service and get your privacy back.

Out of many, many VPN services we’ve tried – we came with the following list of best VPN services for PC users:

What makes the best VPN for your PC?

The best VPNs for PC get the job done in different uses cases. No matter what you want to accomplish with a VPN, these services have you covered. We’re talking about things such as:

Torrenting
Best VPNs for PC handle torrenting with easy. We pose the following questions when selecting the best services: Does a VPN offer servers dedicated to peer-to-peer (P2P) traffic or are all servers in the network up for the task? Both approaches work as far as we can tell, it’s just that in the first case – we like to see P2P-dedicated servers clearly marked on the list (of servers/locations).

Streaming
The best VPNs let you access movies and TV shows on all popular services. The questions we ask are: Can you get a buffer-free experience from a variety of locations? Can a streaming service detect that you’re using a VPN and won’t let you “in” as a result? Are there servers dedicated to popular streaming services like Netflix?

Unlimited access
You’ll want a VPN to bypass your ISP’s restrictions, among other things. The questions we ask include: Can you use a VPN to connect to the Internet from a university campus? Can it get the job done without IT admins knowing what you’re doing online? You don’t want a VPN that can’t handle the relatively simple school or workplace firewall, right? (except if you work for the FBI, for instance).

Bypassing censorship
Related to the previous point – the best VPNs for a PC can be used in high-censorship countries like China, North Korea, UAE, Iran, Saudi Arabia, etc. The infamous Great Firewall of China is arguably the most challenging to overcome, but the best VPNs can do that – and we love ’em for that.

Good for everything
Not all VPNs are best for all uses cases outlined above, but we did want to come up with a good list. So we decided to select VPNs that are generally good for all kinds of tasks. To put it differently, the best VPNs let you access social media and streaming services from all across the world while offering zero-logs privacy – which is preferably confirmed by a reputable third-party.

Speed & reliability
Last but not the least, we had to test the speeds of each of the VPNs. If the experience was too slow, you wouldn’t be accessing YouTube despite that being possible. In a similar vein, we wanted to see whether a VPN delivers reliable and consistent download and upload speeds every single time. We tend to think that reliability is more important than speed for most users.

What about free VPNs?

Sure enough, there are free VPNs out there, but we can hardly suggest them. You see, it takes a lot of money to build a large server network which is directly related to the VPN service’s reliability. Needless to say, this is something free solutions can’t do except in the case they sell your data. And then – what’s the point of getting a VPN if your data won’t be private?

Instead, you should get a VPN with a proven track record to work from all around the world. And that’s what this list of Best VPNs for PC is all about.

For what it matters — and it’s a big deal — most VPNs offer money-back guarantees, meaning that you can ask for your hard-earned cash back if you determine that the service doesn’t work for you. We even entice everyone to extensively use their VPN during the money-back period to see whether it fits their needs. There is no need to throw away money for something you can’t rely on — especially when you know there are other great VPNs out there.

Get a VPN for your PC that works for everything!