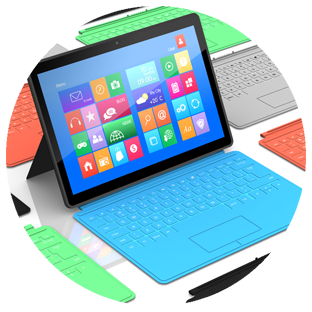 We tested more VPN services than we care to count. This means you don’t have to test all of them to find the one that is best suited for your Windows.

With a VPN app running on your computer, you will be able to hide your online activity, stream Netflix from virtually anywhere, download files via BitTorrent anonymously, encrypt and protect private data from cybercriminals, bypass censorship rules, and much more. So yes, you should sign-up for a VPN service and get your privacy back.

Out of many, many VPN services we’ve tried – we came with the following list of best VPN services for Windows users:

What makes the best VPN for Windows?

Factors that make the best VPNs for Windows, pretty much make them best across the board. And it has little to do with the fact that Windows is still the dominant operating system on computers — it has everything to do with the technology and infrastructure used to deliver the great VPN experience.

But how do you determine that some VPN is good, let alone great, for Windows? First, you/we define criteria and then test multiple VPNs across those criteria. Here’s how we did that:

Streaming
We wanted to see whether a VPN is up for the task with all of the popular streaming services, including Netflix, Disney+, HBO MAX, Hulu, Amazon Prime and so on. What we aim to test is whether it can deliver a buffer-free experience even if we watch some shows in 4K. Not every VPN is up for the task with every streaming service, but the best ones manage to get us the goods. And so we included them on this list.

Torrenting
Testing for torrenting is somewhat different but here too we looked at the speeds — though this time both download AND upload speeds. The best VPNs should have speeds that are almost as fast as if we were not using a VPN. But you know what – we also know that in some cases a VPN could get you even faster download and upload speeds. This happens with ISPs that throttle the BitTorrent (P2P) traffic and with a VPN running your Windows PC, they have no clue what you’re doing online — so they can’t do anything about it.

Bypassing censorship
Not every VPN can work all across the world as savvy IT staff in high-censorship countries can detect when someone’s using a VPN and block — or throttle — his/her Internet connection. The best VPNs for Windows have thousands of servers that are not that easy to track and can bypass these and many other restrictions — which leads us to the next section.

Unlimited access
High-censorship countries are not the only ones blocking users’ access to the Internet in its entirety. Something similar happens at many workplaces where employers would like to have their staff focused on the task at hand, which would be some Excel spreadsheet or something of that sort. So they block access to sites like YouTube, Facebook, Twitter, etc. And a similar thing takes place in many schools and universities across the world. We don’t like that and would rather use a VPN to browse the world wide web with no limits of any kind.

Speed & reliability
Being able to access all websites and services is useless if you can’t get decent speeds to “enjoy” that access. But again, not all VPNs can provide you with enough speed to do so. Also, there are those that work great one day only to find them slouching the next. Preferably, you want both speed and reliability, no matter what you’re up to online. All services on this page have been thoroughly tested to deliver the “goods” — every single time.

Good for all your needs
Last but not the least, what you want is a VPN that works across the board. Perhaps it’s not the fast demon for torrenting but it gets the job done, and also works for streaming, web browsing and so on. You should not get a VPN for any unique need — rather go for the one that will “cover” all your needs. Such a VPN will “do its magic” in the background of your Windows PC, letting you do whatever you want on the Internet.

Should you try a free VPN?

Well, if you have more time at your disposal, I guess it’s ok to try some app out. We are not in that group and would rather do something else — instead of testing an app only to find it not working properly afterward.

You see, building a solid server network requires a lot of money, which is something free services don’t have. Even if they do, chances are they are getting that cash from selling their users’ data. Is this the compromise you’re willing to take? We’re not and we think it effectively kills the point of getting a VPN in the first place.

Instead, you should get a VPN with a rock-solid track record to work from everywhere, and that’s what this list of Best VPNs for Windows is all about.

Furthermore, you’ll want to get a VPN with a money-back guarantee. So, if you determine that the service doesn’t work for you – there is an option to ask for a refund and try some other VPN. There is no need to throw away money left and right, especially when we know that prices of all VPNs are rather similar – at max, we’re talking about differences of a few dollars per month. Your privacy and unlimited access to the Internet are worth more than that.

Get a VPN for your Windows for everything!