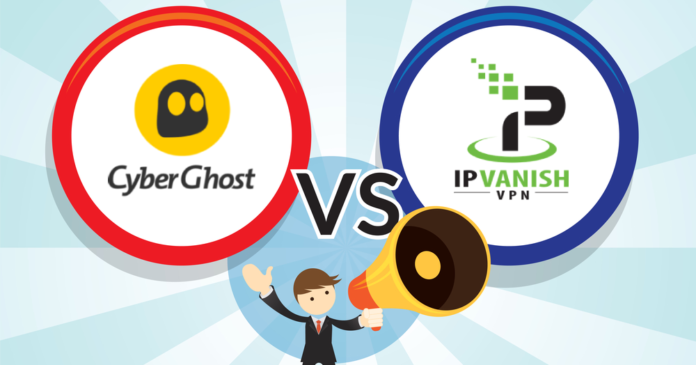 Today we’re comparing two of the popular VPNs — IPVanish and CyberGhost — as we try to help you answer the question: which of the two is a better buy? As that’s usually the case with top VPNs, it won’t be easy but we’ll try to find the winner by comparing the two on a feature by feature basis. Keep reading for more…

Let’s see how the two compare…

Servers & Locations
IPVanish has more than 1,400 servers placed at over 75 locations, including all the popular places in North America and Europe, as well as some in less common countries such as Moldova and the Philippines. Its network in South America, however, leaves a lot to be desired and could be a deal-breaker for those living there. On the other hand, CyberGhost’s network includes 6,000+ servers in 90+ countries; combined, all these servers can deliver blazing-fast download (and upload) speeds from across the world. So, obviously, this round goes to CyberGhost.

Platforms
Both CyberGhost and IPVanish support all major platforms, including Windows, macOS, Android, iOS and Linux. Moreover, both can work with routers to allow other devices to benefit from more secure connections as well. These would include streaming boxes, gaming consoles, smart TVs and all other connected gear. However, only CyberGhost offers dedicated browser extensions. That being said, we have to add that IPVanish supports unlimited simultaneous connections, whereas that number tops at 7 with CyberGhost. We think that’s enough, but we’re not necessarily right on this one as different users have different (specific) needs.

Speed
CyberGhost is faster and has managed to beat IPVanish in all our tests. However, this is not to say that IPVanish is slacker — quite the contrary, it will keep you streaming and torrenting without any hiccups. Also, you may not need “all that” extra speed anyway as most activities like watching movies and TV shows don’t require that much bandwidth in the first place. And the same goes for torrenting and web browsing.

Security & Privacy
Both IPVanish and CyberGhost support a slew of protocols, OpenVPN being one of them. Said protocol manages to consistently deliver super-fast download speeds while also keeping your connection as secure as possible. Also, both services have a zero logs policy, but while IPVanish is a US-based company – CyberGhost operates from Romania, which is part of the EU. Still, it’s worth adding that Romania has some solid privacy protection laws which go beyond what the EU is mandating.

Ease of Use
This is a clear win for CyberGhost, which has fancy apps that are super-easy to grasp. In contrast, IPVanish’s apps look rather outdated, though they are also easy to use with a quick-connect option letting you fire-up a VPN connection in mere seconds. And once that part is done, you’re pretty much good to go.

Streaming & Torrenting
Another draw round with both CyberGhost and IPVanish getting the job done across streaming services — including Netflix, Disney+, Hulu, HBO and so on. And the same goes for torrenting; you will get more than decent download and upload speeds from both services. We will, however, have to give a slight advantage to CyberGhost which tends to work better with BBC iPlayer and we assume this has a lot to do with the sheer number of servers this VPN has.

Bypassing censorship
You should look elsewhere for a VPN if you plan to travel to China as neither of the two VPNs is best suited for the task. We did hear stories of people managing to make both work at some point, but it was never an easy task. For all other countries — including those that are known to censor the Internet — both CyberGhost and IPVanish will work for you.

Pricing
Considering its feature set and the network size, CyberGhost offers one of the best deals out there. Plus, it comes with a rather generous 45-day money-back guarantee and even lets you try it out for free for a single day. In comparison, IPVanish’s money-back guarantee lasts for 30 days and it doesn’t have a free trial period. Both services accept PayPal payments but only CyberGhost will take your crypto assets — namely Bitcoin and Bitcoin Cash.

Between these two we would go for CyberGhost. It is not only more affordable but also has a bigger network size and looks much better. Also, we have found it to be slightly faster in our tests.

That being said, IPVanish is by no means a slacker and it is also a reliable choice for most users – if not all. But, we have (and want) to pick one winner – and that would be CyberGhost.