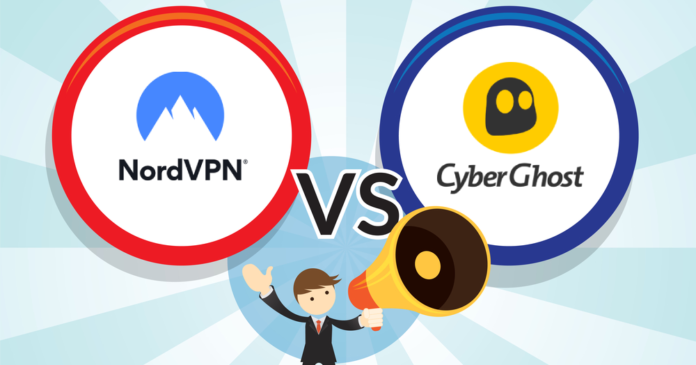 CyberGhost and NordVPN are among the best VPNs in the world, and that is (obviously) one of the reasons why every now and then we are asked which of the two we like more. And that’s what this article will be all about, to help you determine where you should spend your hard-earned money. Let’s get going…

Here we delve into the feature-by-feature comparison…

Servers & Locations
We are talking about top dogs here, both of which have a ton of servers — with CyberGhost taking the crown with more than 6,000 servers spread across 90 countries. NordVPN on its end has around 5,000 servers in 59 countries, meaning this round goes to CyberShark, which — in case you wonder — probably has the biggest network of servers out there. It’s not all that simple though. Read on…

Platforms
This round is a tie with both CyberGhost and NordVPN covering virtually all devices and platforms. Aside from the “usual suspects” — i.e. Mac OS, Windows, iOS and Android — both services will also work on routers, while providing browser extensions for Google Chrome, Firefox and Mozilla Safari. There is one difference though; whereas CyberGhost lets you connect up to 7 devices at once, with NordVPN you’re “stuck” with 6 devices. The good thing is that one of those devices could be your router that could then cover the entire network. So, it’s a small point for CyberGhost.

Speed
NordVPN is faster, it’s that simple. No matter how much we’ve tested the two services, we have found CyberGhost to be slightly slower. That being said, we must add that you can live with it (and then some), but if you want a faster service – NordVPN is the one you should get. I guess the sheer number of servers is just one piece of the puzzle. Perhaps NordVPN has better servers, perhaps they are placed in better/faster data centers? Those are the things we can hardly know, but we can measure the speed of connections. And while both VPNs rock, as we have noted above, this round goes to NordVPN.

Security & Privacy
One thing that comes included with all the best VPN services is high-end security. And so, both NordVPN and CyberGhost rely on AES 256-CBC military-grade encryption to keep your data secure as it flows from your device(s) to the internet — and the other way round. Also, both services offer DNS and IPv6 leak protections, split tunneling, and have a built-in kill switch. When it comes to privacy, we have to give our vote to NordVPN since it is incorporated in Panama. In contrast, CyberGhost is based in Romania, which means it is obliged to share the data it collects with EU authorities (when they require them to do so). Then again, CyberGhost collects the minimal amount of information that could hardly be used to identify any single individual.

Ease of Use & Support
A good VPN service is easy to use and we’re glad to report that we had no problems with neither NordVPN nor CyberGhost. Their apps are fancy and easy to use, letting you connect in just a few steps — i.e. select the server, click connect and you’re good to go — with the app doing the heavy lifting through secure servers in the background. If for some reason, you do stumble on a problem – you will want to chat with a real person rather than going through online resources. Again, both services have you covered with their 24/7 access to live-chat agents. So, it’s another draw.

Streaming & Torrenting
It’s a draw, except if you’re looking to watch BBC’s content, which we have found to be working better with NordVPN. Guess they have more IP addresses to spare or BBC’s tech guys still haven’t caught all of their IPs. Other than that, both services will let you connect to all the popular streaming sites — including Netflix, Disney+, Hulu, HBO, Amazon Prime and so on. And the situation is similar when it comes to torrenting – both services will have you back, ensuring you can download files without anyone knowing what you’re doing.

Bypassing censorship
We would have to give this round to NordVPN but we’re sure CyberGhost is a worthy contender as well. As one of the industry’s biggest companies, NordVPN is one of the prime targets of Internet censors all around the world. They know that and are constantly buying new IP addresses, making it harder for anyone to block them. We haven’t read stories that CyberGhost is working in China, though — and even NordVPN users will have to shift through servers until finding the one that lets them bypass the infamous Great Firewall of China.

Pricing
Both services are rather affordable, but CyberGhost is slightly cheaper. Also, it offers a more-than-generous 45-day money-back guarantee where such a guarantee with NordVPN lasts for a month. CyberGhost will also take PayPal payments while such an option is not available with NordVPN. It will, however, only accept Bitcoin and Bitcoin Cash, whereas you can use just about any cryptocurrency to pay for NordVPN.

As we are usually saying, it lot depends on your needs. If you need a VPN that can work in China, go for NordVPN. Otherwise, you’re good to go with either of the two services – as both will have you covered no matter what you’re doing online.

Personally, we prefer NordVPN and are willing to pay the premium knowing that it will keep working no matter where we happen to be. It ticks all the right boxes and will keep you well protected throughout the globe. But again, you can’t go wrong with CyberGhost.