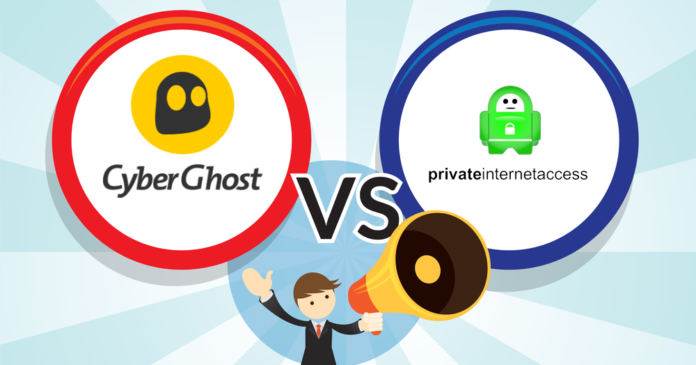 The next VPNs we want to compare are CyberGhost and Private Internet Access (or PIA for short). Both services offer great features and you can hardly go wrong by selecting any one of them. Nevertheless, we want to choose a single winner, no matter how hard that may be — so read on for details. Let’s get started, shall we?

Servers & Locations
This round belongs to CyberGhost. Period. With over 6,000 servers in 90+ countries, it can hold ground against most VPNs out there. And as you probably know, the number of servers is directly correlated to the VPN’s overall performance. That being said, we must add that PIA is NOT a slacker by any measurement — quite the contrary, it is one of the fastest VPNs in the world. More on that in a moment… What you need to know in this section is that PIA has 3,000+ servers spread across over 40 countries and 60+ locations.

Platforms
Like most modern VPNs, CyberGhost and PIA include support for all major platforms. This means you will be able to download native apps for Windows, macOS and Linux on the desktop/computer side; and for Android and iOS on the mobile side. Also, both VPNs can work with routers so you could secure your entire home/office network — and include other devices to the mix such as streaming boxes, gaming consoles and smart TVs. And the same goes for browser extensions, though the one provided by PIA is much more powerful. A single CyberGhost license allows for 7 simultaneous connections, whereas that number jumps to 10 with PIA.

Speed
This round is a tie, as sometimes we got faster Internet speeds with CyberGhost and sometimes – PIA took the crown. Still, we would have to say that PIA is slightly faster which we think has something to do with their recently launched NextGen network. Again, CyberGhost is far from a slacker and always managed to deliver download and upload speeds you can rely on. Most users, without actually measuring their Internet, wouldn’t notice the difference between the two VPNs, though.

Security & Privacy
The most important thing to know is that both CyberGhost and PIA support WireGuard — which as you may know — is the latest (and greatest) Internet protocol that manages to deliver blazing-fast Internet experiences. OpenVPN is also supported and so are a few other protocols. But when it comes to privacy, we would give a slight edge to CyberGhost, which operates from Romania. Although it’s an EU country, Romania has some solid privacy protection laws that go beyond what the EU is mandating.

Ease of Use
CyberGhost looks easier to use; but the keyword here is “looks” because it has a slightly more polished user interface, whereas PIA could use some design tweaks here and there. Nevertheless, both VPNs are easy to use with the standard procedure involving finding a server and clicking “Connect.” After that, all your Internet whereabouts are encrypted and your privacy is protected.

Streaming & Torrenting
It’s another draw round as both CyberGhost and PIA get the job done across streaming services — including Netflix, HBO, Hulu, Disney+, and so on. The situation is similar with torrenting, and you can expect to get more-than-decent download and upload speeds from both services. We will, however, have to give a small advantage to CyberGhost which in our tests managed to work with BBC iPlayer right from the bet, whereas we have to jump between a few servers before being able to do that with PIA.

Bypassing censorship
Neither of the two VPNs is the best choice for China, though we bet that at least a few of those 6,000 servers in CyberGhost’s network can get you around the Great Firewall of China. We haven’t been able to test this claim, but somehow it makes sense. What we do know is that both VPNs will work in other places where your Internet may be limited, such as schools & universities, workplaces and so on.

Pricing
CyberGhost offers one of the best deals out there, and it comes with a generous 45-day money-back guarantee. Like that’s not enough, it also lets you try it out for free for a single day. In comparison, PIA’s money-back guarantee lasts for 30 days and it doesn’t have a free trial period. Both services accept crypto payments but PIA goes beyond the most popular cryptocurrencies like Bitcoin and Bitcoin Cash to offer an array of other options, as well.

If you’re a Chromebook user, we would suggest getting PIA as it has the better Chrome extension — which is probably the best in the entire industry. For everyone else, we suggest getting CyberGhost. Its bigger network should deliver more consistent Internet speeds while its apps provide a slightly better user experience. So yes, our money goes to CyberGhost — though again, PIA will also get the job done for most users.

So, which VPN do you prefer?