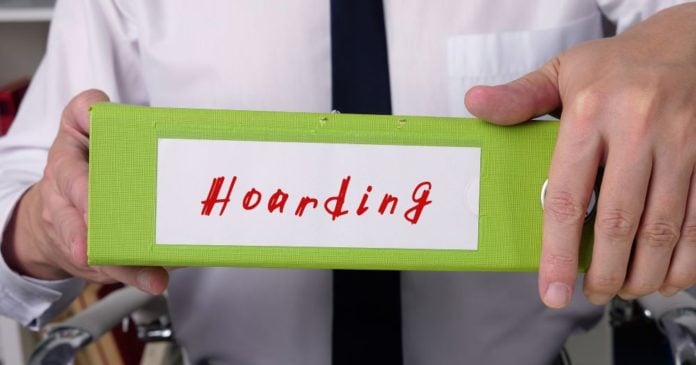 In other words, data hoarding presumes never deleting electronic data and it is different from collecting data — with the latter actually making sense as it typically involves the data that is related to the work one does, or his/her passion.

The problem is that data hoarding can go fairly unnoticed. It is, after all, easier to mindlessly cram files into a separate folder than to have a bunch of stuff lying around your house. At first, it’s not a problem until it becomes one.

When you transfer that concept to your computer or other device, it too can become a problem. Let us first go more into details about data hoarding and then to try to help you get rid of this nasty habit.

What is data hoarding?

Data hoarding happens when a person obsessively collects files, keeping them for those highly unlikely “just in case” scenarios. It presumes access to data, not just at any time or anywhere, but forever.

It is a surprisingly popular thing to do with “/r/DataHoarder/” sub-reddit existing since 2013 and counting more than half a million members. Their (somewhat scary) motto is “What do you mean, delete?”

I guess it made sense to keep DVDs with MP4 movies at some point in the (recent) past, but these days you can get all the movies you want for roughly $10 per month from services such as Netflix, HBO, Disney+ and so on. There is no need to have those physical DVDs occupying space in your apartment.

Sure, you can place all of them on some massive external hard drive, but still – why keep a copy of something you will seldom watch and even if you want to do so, you can get it online.

From what I’m reading, it is hard to debate these sorts of decisions.

And you know what, individuals are not the only ones engaging in data hoarding; there is also…

Like that’s the case with individual behavior, there are also companies that are “engaged” in data hoarding — keeping backups and then backups of those backups. And sometimes, these files become obsolete in a matter of years — and then, no one is in charge of erasing them permanently.

This practice can also affect businesses, cluttering their networks, storage capacity and even the system’s performance. Plus, because of all that data no one watches regularly, it could also turn into a security risk.

For instance, a hacker could get into some old machine and potentially get the old customer database. Some of those data points may still be valid and could cause problems for both customers and the company which failed to properly address the hoarding issue.

Mind you, this isn’t something only a few companies are doing, with Veritas Data Genomics’ survey from 2016. revealing that 83% of IT decision-makers saying that they believe their company is a data hoarder.

The problem, according to Veritas Data Genomics, is the lack of incentives for anyone within the organization to do digital housekeeping — i.e. deleting obsolete files. In order to address this issue, they suggest appointing a Chief Data Officer who would be in charge of keeping the data in order at all times.

When data hoarding becomes a problem?

Data hoarding becomes a problem when it goes beyond collecting stuff related to the things you care about. For instance, there is nothing wrong in collecting movies, music and books you like; the problem is when you start collecting it all.

Here are some of the signs to look out for:

1. You’re saving more files than you can manage. And you have the folder called “check later” which you haven’t checked for years.

2. Your device has slowed down. All those files have come back to haunt you… with a vengeance. If you store stuff on an external drive or in the cloud, this may not happen — but you may soon fill up your external drive or the cloud service.

3. You are holding files that are no longer of any use. These could be installations of old software, technical ebooks about stuff that is no longer relevant (or in use), and so on. The general rule of thumb is – if you haven’t used something for a few years, chances are, you don’t need it.

Remember that data hoarding can cost both your time and energy, so try keeping your devices as clean as possible.

How to stop data hoarding

Stopping data hoarding is arguably easier said than done. Still, there are some things you could do:

1. Delete a little every day
Try putting in 5-10 minutes every day to delete and organize files on your computer, hard drive or cloud storage. Chances are, this will keep you busy for a month and more.

3. Consult others
If the files you’ve been hoarding are not all yours, you will have to contact other people and ask them for help in deciding which files to delete (first). Engage them and explain the benefits of keeping the storage free from clutter.