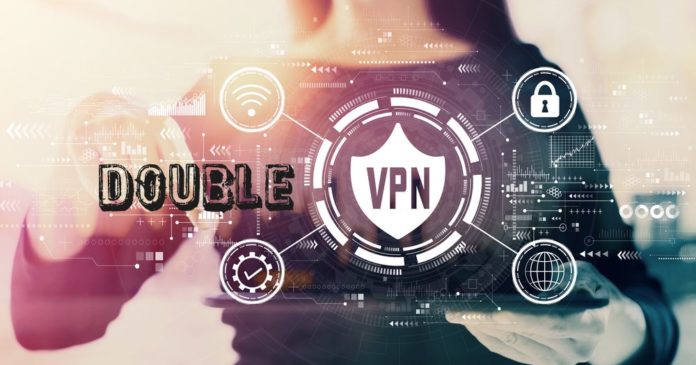 A VPN stands for Virtual Private Network, which is the technology that lets you connect to a remote (VPN) server and get a new IP address — all while encrypting your connection. Double VPN does it two times and today we’re going to explain how it works, why and when you should use it — if you actually need it.

What is a double VPN?

In a double VPN setup internet traffic passes through two VPN servers instead of one. This means that all the traffic is encrypted twice, making for an even more secure connection — though, even a single VPN could use the unbreakable 256-bit cipher.

Double VPN also has different names, depending on who’s selling it — we’ve seen it being marketed as double-hop, multi-hop, cascading, nested, or chained VPN.

Here’s how data is transferred in a double VPN setup:

Incoming data goes through the same process in reverse.

This could obviously cause the VPN to slow down a bit unless you select fast servers and, therefore, a solid VPN service provider.

On the plus side, double VPN will make it even harder for government agencies and major corporations to track your web whereabouts. As far as they (don’t) know, you are accessing the Internet from the second server — which can be located in another part of the world.

Do you really need a double VPN?

Answer to this question, in most cases, is NO. You can perfectly “get away” with a regular VPN which will keep your communication secure enough — and by that we mean it will hide your IP address and encrypt all traffic coming to and from your device(s). With a double VPN, you effectively double that protection, but that feature could — and probably will — affect the speed of your Internet connection.

I would assume a double VPN is needed for journalists, whistleblowers, and political activists in countries with authoritarian regimes where people are (unfortunately) being watched all the time. With a double VPN, users get an extra layer of security.

If you just want to watch the latest Netflix or Disney+ show, the regular VPN will get the job done. And the same goes for torrenting and casual web surfing.

What are the downsides of a double VPN?

As noted above, turning on the double VPN capability (or multi-hop, however it is called), will likely have an instant bad effect on your connection speed. After all, now the traffic is routed through two rather than one server.

The situation will be even more dire if you select servers on two very different sides of the planet. For instance, do not expect the blazing fast connection if one server is in San Francisco and the other one in Sydney, Australia.

To solve this, most VPNs don’t let you go wild with server selection. There are preset options you can choose from that have been tested to provide optimal results. That, we think, is a good compromise.

Which service should you get for a double VPN?

Most of the top VPNs offer double VPN capability, though — as mentioned above — some refer to it as multi-hop capability. For the fast experience you can rely on, get one of the services from our Best VPNs list. These are all field-tested VPNs that won’t let you down.

Nevertheless, if you really need a double VPN, make sure to go through the VPN service’s feature list just to be sure that the capability comes included with the service you’re looking to buy. With that in mind, hop over to our Best VPNs page and take it from there.