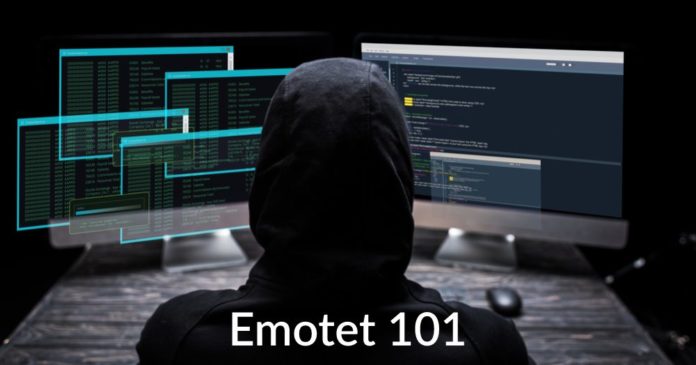 Emotet is a form of trojan that first appeared in 2014 and has ever since caused havoc for users all around the world. In this article, we want to explain more about Emotet, how it works and why it caused such a pain. Read on for details…

How does Emotet work?

Emotet is a trojan which creates unauthorized backdoors into computer systems that can be exploited by hackers. Once established on a victim’s computer, Emotet allows the hacker to steal as much private information as they desire. Also, Emotet will try to spread itself to other devices connected to the host computer.

And that “spreading” part is especially nasty as Emotet’s creators rely heavily on social engineering — spreading through very convincing spam emails in which a victim is tricked into clicking a link and unwillingly initiating the malware download.

Why makes Emotet so notorious?

Emotet is a form of polymorphic malware, which means it can change its coding on the fly to fool an antivirus that scans for specific signatures of recognizable threats. This makes Emotet undetectable at first, and once it is detected – the damage has already been inflicted.

All this has helped Emotet “prosper,” making it a consistent component in many cyber attacks. Some of these have seen an Emotet-kind malware even opening new backdoors for hackers, making for an even bigger damage potential.

Heck, some experts even call it “the world’s most dangerous malware” and this is especially true since it initially infiltrated banking systems.

Adding to that is the fact that in 2017, Emotet creators started selling its creation as a “malware as a service,” offering a botnet based on Emotet infrastructure to anyone who wanted to pay for it.

In 2019, the biggest Emotet attack was initiated, targeting several different German institutions. Among the affected organizations were Justus Liebig University, Bad Homburg (a city north of Frankfurt), the Catholic University of Freiburg and the entire network of city authorities in Frankfurt — which was forced to shut its network down and worked to purge the systems of the infection.

The situation finally calmed down on April 25, 2021. on the heels of efforts from Europol’s cybersecurity teams. Alas, that didn’t solve the problem for good, with Emotet’s resurgence being detected in November 2021, implemented by Trickbot – which is another piece of banking malware.

How to know if your computer is infected with Emotet?

It used to be very hard, if not impossible, to detect Emotet — until Japan’s computer emergency response team released a tool called EmoCheck. Letting it run should give you a prompt answer on whether your computer is infected with Emotet or not.

Additionally, it is a good idea to keep an eye on your finances as this sort of malware is notorious for trying to steal victims’ money. So, if you notice that your funds are moving in unknown directions – it could be a red flag for an Emotet infection. The surefire way, though unfortunately not the easiest one, to clean it off your computer is to format your hard drive and install everything from the start. You could also call an expert to do this time-consuming task on your behalf.

How to prevent an Emotet infection?

As we are always saying, your brain is the best tool in most cases. Do NOT open attachments from people you don’t know and even from people you DO know if they include executable files. Also, repeat the same with links – look where you’re clicking and, even more importantly, where you leave your credentials.

You should also use an antivirus and have it updated at all times. And the same goes for a VPN, as it will keep your connection more secure. Heck, some will even clean the page from malware before delivering it to you.

We’re here to help you get the best VPN and for that we have the aptly named page – Best of the Best VPNs. All of those services have been tested for years and won’t let you down no matter what you throw at them.

In addition to keeping your connection secure, they will also let you unlock parts of the Internet that would otherwise be outside of your reach — like when you’re in places that limit what you can and cannot do online.

So check out that page and get an amazing VPN for yourself today! You can always thank us later. 😉