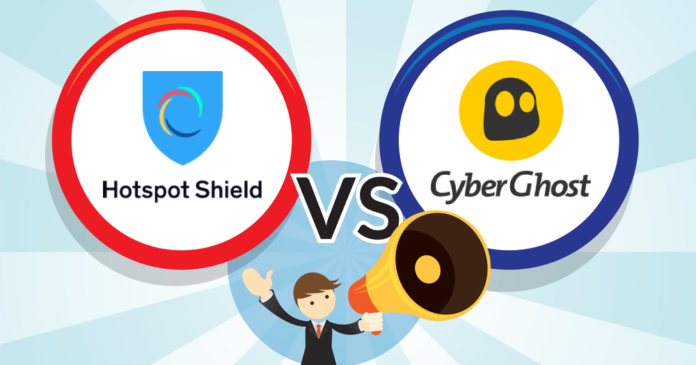 Hotspot Shield and CyberGhost are among the most popular VPNs on the planet and in this article, we are trying to compare the two. But, as you’re about to find out, it won’t be an easy choice to make. Therefore, we’ll try to break it down for you by comparing the two on a feature-by-feature basis, so that eventually you could get the one that works best for your unique needs. Let’s get busy…

Both Hotspot Shield and CyberGhost have strong arguments playing for them…

Servers & Locations
This one is an easy win for CyberGhost which has way more servers. We don’t know Hotspot Shield’s exact figure (they don’t share that information), but we know that CyberGhost has more than 6,000 servers, making its network one of the biggest in the industry. It is also covering 111 locations across 90 countries. Nevertheless, Hotspot Shield is also operating a sizable network that spans more than 115 locations in 80+ countries.

Platforms
Like that’s the case with many top VPN providers, Hotspot Shield and CyberGhost offer apps for all major platforms — including Windows, macOS, Android, iOS and Linux. Moreover, both work with routers to allow devices such as smart TVs, consoles and streaming boxes to benefit from more secure connections, as well. And the same goes for browser extensions – you can get those from either Hotspot Shield or CyberGhost. The latter, however, provides users with more simultaneous connections – 7, whereas that number tops at 5 with Hotspot Shield. So it’s another, albeit small, victory for CyberGhost.

Speed
This one’s tricky… As far as the users in the West are concerned – Hotspot Shield is faster. The company uses its own proprietary protocol called Hydra that lets it deliver blazing-fast download and upload speeds. In fact, this feat alone makes Hotspot Shield one of the fastest VPNs in the world. That being said, CyberGhost is not a slouch but definitely not as fast as Hotspot Shield — except if you’re using it in countries where Hotspot Shield doesn’t have enough servers (or any server for that matter). Then, you can expect CyberGhost to be faster.

Security & Privacy
Security comes as given with all VPNs, CyberGhost and Hotspot Shield included. When it comes to privacy though, we would put our money on CyberGhost. For start, unlike Hotspot Shield, it is not based in the United States where we’ve seen the government infringing on the user’s Internet privacy in the past (i.r. Edward Snowden). While CyberGhost is based in Romania, that doesn’t mean it will share data that easily with the rest of the EU. In fact, we’ve seen the local courts refusing to hand over data to the authorities in the past and we like that. A lot.

Ease of Use
This round is a tie as both VPNs offer well-polished apps. Perhaps those made by Hotspot Shield are easier to use, and we guess it has something to do with the way its Hydra protocol works. Instead of selecting the country and server, the Hotspot Shield app only lets you select the country — in the case of the U.S. you get to choose between the West and East coast. And that’s it. In comparison, CyberGhost lets you browse and connect to servers on a city level. That’s how other VPNs work as well; but I guess for the newbies – Hotspot Shield’s approach is easier to comprehend.

Streaming & Torrenting
Since streaming and torrenting don’t require much speed, you can rely on either of the two services to watch movies and TV shows from anywhere without worrying about any video buffering. We’ve tested both services with Netflix and Disney+ and they worked like a charm. And we’re hearing (reading actually) that you can also use them for Hulu, HBO Max, etc. The situation is similar with torrenting — we got solid download and upload speeds with both Hotspot Shield and CyberGhost. So we would call this round a tie.

Bypassing censorship
Neither of the two services can reliably work in China. You can perhaps find a server from CyberGhost’s vast network to be able to get around the infamous Great Firewall of China, but with Hotspot Shield that is an impossible task. And they don’t hide it. For other high-censorship countries — as long as they don’t emply tech-savvy censors — you can get away with either of the two services. For China however, you’re better off getting some other VPN.

Pricing
Considering its feature set and the network size, CyberGhost offers one of the best deals out there. Plus, it comes with a rather generous 45-day money-back guarantee and even lets you try its service for free for a single day. Hotspot Shield also offers a free trial as well, but it’s a bit more expensive. Unlike CyberGhost, it doesn’t let you pay with cryptocurrency (Bitcoin and Bitcoin Cash), though.

As we’ve mentioned in the introduction, it won’t be easy to select a clear winner.

We like Hotspot Shield a lot as it tends to be faster for us. Then again, CyberGhost did pull a punch, and considering its wide feature set and its low price – we can’t but recommend it as well.

At the end of the day, selecting between these two VPNs will be based on your needs. If you frequently (plan to) travel to high-censorship countries, we think you should go for CyberGhost. Otherwise, if you North America and Europe are mostly your turfs – we say get Hotspot Shield.

So what is it going to be for you?