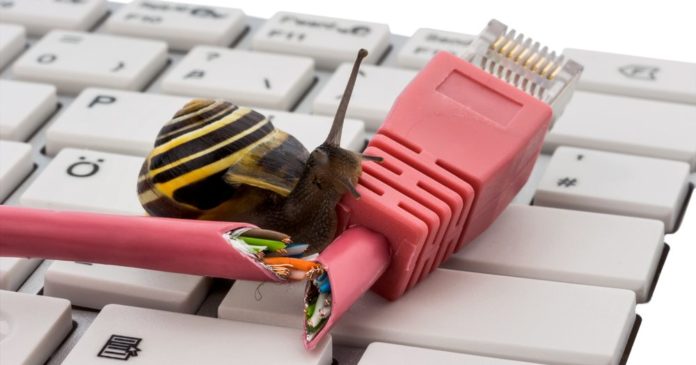 You may notice that sometimes your Internet slows down and you can’t easily pinpoint the problem.

It could be that some software is updating at that moment or that your BitTorrent client is getting “nervous” in the background, downloading and uploading stuff with no limits of any kind.

However, it could also be that your ISP is throttling your traffic, causing nasty things like Netflix buffering as a result.

Speaking of which (Netflix), most users notice bandwidth throttling when watching a movie or a TV show when the infamous “loading” or “buffering” icon hits the screen.

In this article, we want to explain why bandwidth throttling happens and what you can do about it. Let’s get started.

ISPs do this for a number of reasons, including:

The sad thing is that this practice is perfectly legal for ISPs. They can’t be held responsible for throttling your Internet connection.

How to know that your bandwidth is being throttled?

The easiest way to check whether your ISP is throttling some activity on the Internet is to visit a speed test site like Ookla and then run the test.

Now, turn on your VPN and repeat the process. (you do have a VPN, right?)

Since a VPN will encrypt all traffic, your ISP won’t be able to know what you’re doing online so it can’t throttle your speed.

So if you see that your Internet is faster with a VPN, you know that you have your ISP to blame for the speed bump.

Which brings us to our final point…

How to stop bandwidth throttling?

The easiest way to do that is to switch boats and sign-up for a different ISP. But yes, we know it’s easier said than done as you may be on a contract or you don’t have many options in the first place.

So if you’re stuck with the existing ISP, you can contact them and explain the problems you’re experiencing. They may be able to help you out or, at the very least – suggest that you move to a bigger (and pricier) plan.

You could also use a VPN to not only stop bandwidth throttling but also to keep your Internet whereabouts hidden from your ISP. As far as they know, you are just visiting a single secure location (IP address of a VPN server you’re connecting to) and that’s it.

What happens between that server and your device – they don’t know.

A VPN can do much more than that

In addition to keeping your ISP from throttling your connection, a good VPN will also let you do other things, like letting you access streaming services in other countries. Many folks use it to access US Netflix which has the biggest library of movies and TV shows, while some others like to watch British content with BBC iPlayer.

Also, a VPN will keep you protected when you’re out and about using public Wi-Fi hotspots. Then it will encrypt all the data your device sends and receives, making it impossible for hackers to snoop into your traffic.

And that’s just a start. You see, we think a VPN is a must-have tool for everyone these days. It’s just the world we all live in with Big Tech companies and various government agencies keeping up with every move we make on the Internet. We don’t like that and are thus relying on our VPNs to get us back our privacy. It is our right after all and we don’t want to give it away that easily.

To join the ride, grab a VPN for yourself today. Hop over to our page with Best of the Best VPNs and take it from there. You’ll thank us later. 😉