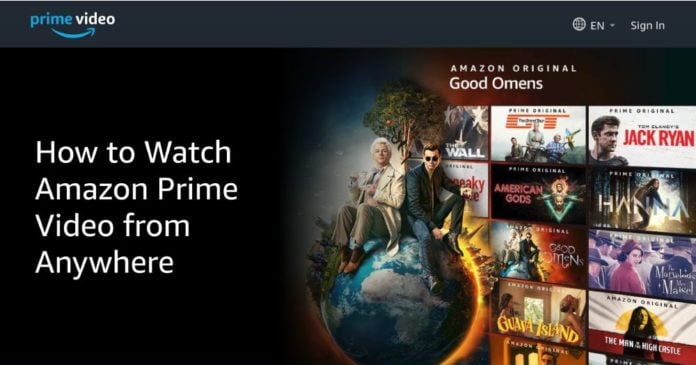 Previously known as Amazon Video On Demand, Amazon Prime Video is a video streaming service that is similar, and a competitor to Netflix (and other such services). Amazon, obviously, has a lot of money to spare and has used it to create a massive content library consisting both from licensed content, and its own original TV shows and movies. The company also has a massive user base that helped it garner millions of subscribers pretty quickly.

But I’m getting ahead of myself, let’s first see what Prime Video is all about and how to access it outside of the U.S.

What’s Amazon Prime Video all about?

Amazon Prime Video, or just Prime Video, offers TV shows and movies for rent (streaming) or purchase, which include a selection of Amazon Studios original content (Amazon Originals) and licensed content from other studios. The service works on computers, smart TVs, smartphones, tablets, some gaming consoles, as well as Amazon’s own gadgets.

Some of the best Amazon Originals movies you can watch on Prime Video include:

And some of the best Amazon Originals series are:

In addition to the U.S. – Prime Video is also available in other countries all around the world — except for Mainland China, Cuba, Iran, North Korea, and Syria. However, due to licensing deals, not all of the content on Prime Video is available everywhere.

How to access the U.S. Amazon Prime Video from anywhere

A VPN comes to the rescue letting you connect to a US-based server to trick Amazon and access all of the content you want. This is especially handy if you’re an American citizen currently working or staying abroad — you will still want to access the library of videos you got accustomed to.

In order to do this, you will have to turn on your VPN app, and select a server that is based in the United States. Once that part is done, log in to your Prime Video account and start streaming all the TV shows and movies you want. It’s that easy but bear in mind that you will still need a working Prime Video subscription. A VPN doesn’t get you that.

A VPN offers so much more

In addition to letting you access Prime Video while you’re abroad, a VPN app will also do other things for you. For start, it will let you anonymously surf the web so that major corporations and governments can’t track your online activity. This, in turn, will provide you with access to other websites and services that could otherwise be outside of your reach — think US Netflix, Hulu Plus, BBC iPlayer and so on. Furthermore, a VPN will encrypt all your online data, thus shielding you from hackers and spies.

To sum it up, we think everyone should run a VPN app on his/her computers and mobile devices. And if you’re into Prime Video, we suggest you start by checking our list of Top VPNs for Streaming. All of them offer top-notch service and you can hardly miss by choosing any one of them. So check out that page and regain your privacy today!