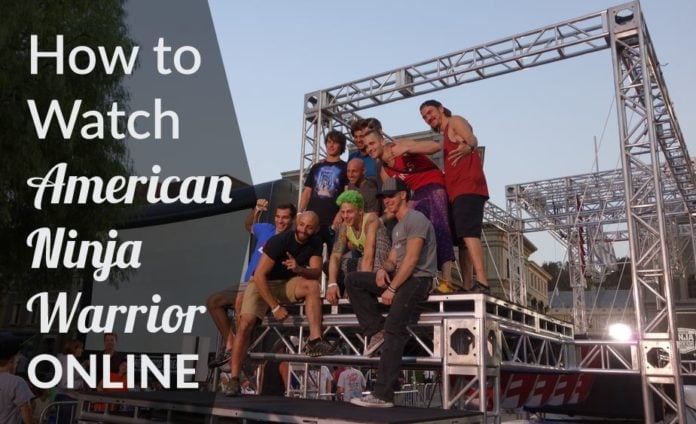 American Ninja Warrior may not be the most popular TV show in America, but with 5-6 million viewers it does have a solid audience. And unsurprisingly, some people not living in the U.S. want to tune into action and enjoy the ride as well.

However, that content may not be available in all parts of the world due to geo-restrictions, local regulations and, most importantly, content rights. There is a way to get around these restrictions though, but first – let’s talk about the show itself…

What’s American Ninja Warrior all about?

American Ninja Warrior, aka ANW, is an American sports entertainment competition, which is a spin-off of the Japanese television series Sasuke. It features hundreds of competitors attempting to complete series of obstacle courses of increasing difficulty in various cities across the United States, in hopes of advancing to the national finals on the Las Vegas Strip and becoming the season’s “American Ninja Warrior.”

To date, only two players — Isaac Caldiero and Geoff Britten — have finished the course and achieved what is known as the “total victory.”

The series premiered on December 12, 2009, on the defunct cable channel G4, and airs now on NBC with encore episodes showing on USA Network, NBCSN, and Esquire Network.

How to watch American Ninja Warrior online in the US?

It’s easy to watch American Ninja Warrior in the U.S. except maybe in your office or in the school setting where some restrictions may be imposed by network administrators. If that’s the case — i.e. you want to watch the ANW at your work/school — you’ll have to follow the same steps as if you were living in other parts of the world.

Presuming that’s not the case, simply visit NBC.com and find your way to the American Ninja Warrior link from where you can enjoy the show free of charge. It’s that easy.

How to watch American Ninja Warrior outside of the US?

It is slightly more complicated to enjoy ANW in other parts of the world, or as we said above, if you’re in a network that prohibits access to certain video content such as the one provided by the NBC.

In order to bypass this and other restrictions, you should fire-up your VPN app and let it provide you access to American Ninja Warrior and all other content that would otherwise be outside of your reach.

Select a US-based server, click connect and you’re good to. Now repeat the process outlined above (i.e. visit NBC’s website), sit back and relax, watching the contenders struggling to get around all the different obstacles on their way to glory.

How to get the right VPN service?

You shouldn’t get a VPN only to watch American Ninja Warriors; a good VPN service will help you unlock all of the content you want to access, while keeping your identity under the radar. It does that by routing the traffic coming to and from your computer and/or other devices through secure servers located across the world.

We suggest you start with our list of Top 5 VPNs; we can pretty much guarantee that all services on that page will “get the job done” for you. These are the best of the best VPNs that have been proven to work on numerous occasions so you can hardly miss by choosing any one of them. For the best experience, get the top service and forget about it. Let it do its magic in the background as you safely and securely browse the web, watch videos, download files and so on. Again, it’s actually that easy.