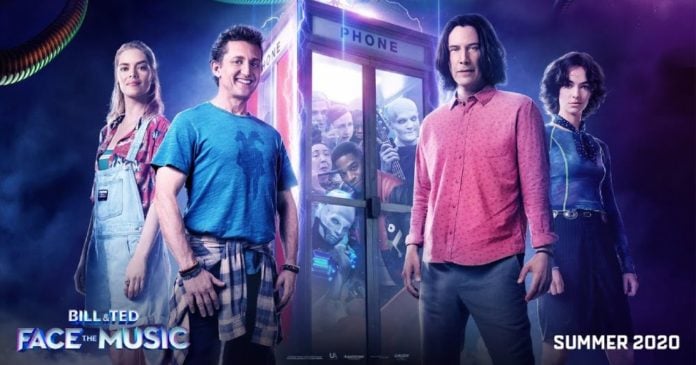 It’s been a long time, but Bill and Ted are back. They are here to one more time rock your world, and yes – you want to join the ride.

But… You can’t do it that easily. At least not yet if you’re not in the U.S. Or if you’re using a VPN… Which is what this article is all about…

About Bill & Ted Face the Music

Bill & Ted Face the Music is the latest installment in the Bill & Ted trilogy. Directed by Dean Parisot and written by Chris Matheson and Ed Solomon, it sees Alex Winter and Keanu Reeves reprising their roles as the respective title characters, and William Sadler reprises his role as the Grim Reaper.

The movie was simultaneously released in theaters and through video on demand in the United States on August 28, 2020; and has received positive reviews from critics, who deemed it a worthy addition to the franchise.

The storyline sees Bill and Ted enduring the monotony of middle-aged life when they are warned by a visitor from the future of the need for them to create a song in 78 minutes that will save all life on Earth and the entire universe. The pair works with their families, old friends, famous musicians, and each other to complete the task.

How to watch Bill & Ted Face the Music online in the US?

In the US, Bill and Ted Face the Music is available from multiple platforms — including iTunes, Google Play, Amazon, Vudu, Xbox, and FandangoNow. However, of the bunch, only Fandango Now will let you rent it while other places only offer the option to buy.

It is worth adding that in 4K, the movie is available through Google Play, iTunes, and Vudu — while the one on Amazon is listed as only HD. The rental on FandangoNow is 4K as well and is also $5 cheaper — $19.99 compared to the purchasing price of $24.99.

If you have access to any of the aforementioned services – you can watch/rent the latest movie in the Bill & Ted franchise (when you pay for it). If you have the appropriate account but are not in the U.S. – well, you’ll need a VPN in order to first connect to a US-based server and then watch the movie.

How to watch Bill & Ted Face the Music from anywhere?

If you can’t wait for Bill & Ted’s third movie to hit streaming services in your country, you can use a VPN to bypass the geolocation filters these services use to block access from other places. Simply connect to a US-based server, and normally access the service you want to use.

If you don’t have an account with any of those services, you may want to open it now. If that’s not possible from where you live — some services may require an American credit card — you can use a gift card to pay for the service. A good place to get such a gift card is MyGiftCardSUPPLY, where you can find gift cards for many media streaming services and we’re sure you’ll find the one that will let you watch Bill & Ted Face the Music.

Don’t get a VPN just to watch movies…

Don’t get me wrong – it is perfectly fine to get a VPN for accessing video streaming services, but a VPN has much more to offer…

For instance, it will let you anonymously surf the web so that the Big Tech giants and various government agencies can’t follow your digital footprint on the Internet. Beyond surfing the web, a VPN will also let you download and upload files using BitTorrent under the radar.

Plus, because of its ability to encrypt all your data, it will make connecting to public Wi-Fi hotspots secure.

A VPN app can run across devices and platforms, with the best services also coming with the router support so you could protect your entire home network. This in turn means that devices like smart TVs, gaming consoles, and streaming boxes get to benefit from a VPN connection, as well.

Yes, we think everyone should be using a VPN these days… It’s just the world we live in… And we suggest you start by checking our list of Best of the Best VPNs and take it from there. All services on that page have been field-tested and won’t let you down.