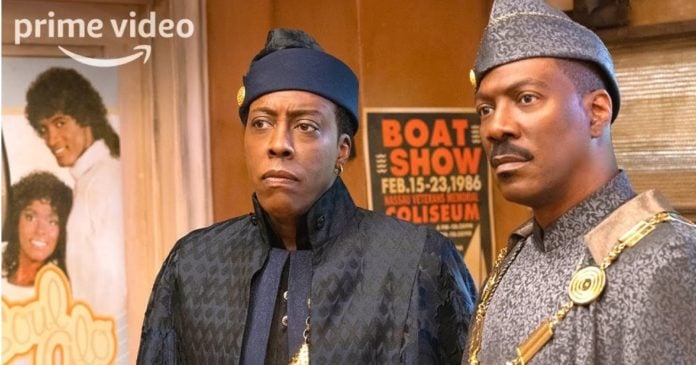 You may be looking forward to watching Eddie Murphy reprising its role in Coming 2 America, but unfortunately, that is not possible in all parts of the world. At least if you’re not using a VPN – which will let you bypass Amazon’s geo-restrictions and enjoy the comedy like it’s nobody’s business. Cause that’s what a VPN does for you – makes your Internet whereabouts yours and yours only.

Before we delve into details on how you can watch Coming 2 America, let us share a few words about the movie for those (living under the rock) who still haven’t heard of it.

What Coming 2 America is all about?

Coming 2 America is a 2021 comedy film and a sequel to the original 1988 film starring Eddie Murphy. Originally, it was supposed to be theatrically released by Paramount Pictures, but the film’s distribution rights were sold to Amazon Studios due to the COVID-19 pandemic. Then, Amazon released it digitally via Prime Video on March 4, 2021.

The storyline sees Prince Akeem of Zamunda and Semmi traveling (returning) to Queens to meet King Jaffe’s illegitimate son, Lavelle Junson. They find him a smart-mouthed ticket resaler struggling to get a real job. After an awkward reunion with his mother Mary, Akeem takes them both and Lavelle’s uncle Reem back to Zamunda, much to his family’s displeasure.

And that’s where all the fun starts… Don’t want to spoil the movie for you. I guess, you should know that Coming 2 America received mixed reviews from critics, some of whom noted it as simply a retread of the first film. Even if that’s true, I’d still want to watch it. 😉

How to watch Coming 2 America from anywhere

It is obvious how you can watch Coming 2 America from the U.S. – you’ll just need access to Amazon Prime Video. If you didn’t have a reason before to get one – well, now you may have it.

As for the rest of the world, they too may be able to enjoy the movie through Amazon Prime Video, presuming it is available in their country. Otherwise, they will have to get a VPN and connect to a server in the country that has Amazon Prime Video and then (literally) join the party. In case you wonder, we always suggest connecting a US-based server and signing-up for a US “version” of the service, cause in most cases – you’ll get the best streaming experience. Plus, you’ll get access to the widest possible catalog of movies on the U.S. Amazon Prime Video.

You will have to pay for Amazon’s streaming service with a gift card, though. You can buy one from Amazon itself — just make sure it has enough funds to cover the cost of the subscription.

Then create a (new) Amazon account with a US address (find one with Google), sign-up for Prime Video, and pay for it with a gift card. Before you know it, you’ll be laughing alongside Murphy. 😉

Don’t get a VPN to watch one movie…

…no matter how good it is, a single movie should not be a reason enough to get a VPN. Instead, get a VPN for all the bells and whistles it has to offer. And that’s a lot, in case you wonder.

For instance, a VPN will let you bypass various restrictions that may be imposed on your way to a completely free and open Internet. These sort of restrictions could be imposed in your school, university, workplace or an entire country. This is especially important when you want to visit some of the high-censorship countries.

In a similar vein, you will be able to access all streaming services – not just Amazon Prime Video. Suddenly, all movies and TV shows from Hulu, HBO Max, Disney+ will be available at your disposal. You will still need valid subscriptions to those services, though.

Perhaps more important is the VPN’s ability to keep you anonymous online so that the likes of Google and Facebook can’t easily track you down. And the same goes for your ISP, various government agencies, and everyone else looking to get ahold of your Internet habits — and potentially profit from them.

We’ve just scratched the surface here cause we think everyone should be using a VPN these days. In that sense, you may want to check out our page with Best of the Best VPNs and get a service that will work for your needs…