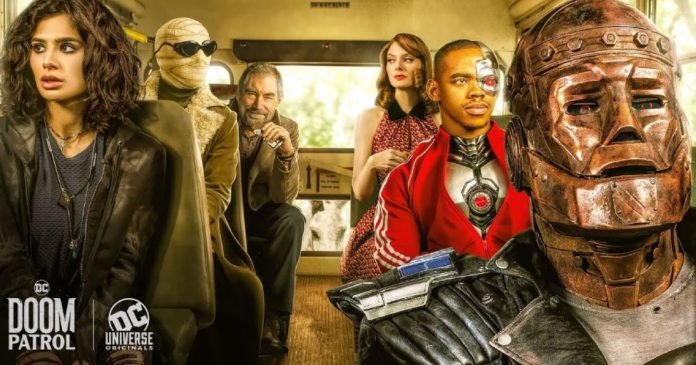 Fans of DC comics were rejoicing when Doom Patrol hit their living rooms in early 2019. But this, unfortunately, was good news only for those in the US while the rest of the world had to wait a little longer in order to keep up with the Chief and his team.

Except, of course, if these same fans had a VPN on their side to bypass geo-filters imposed by the networks streaming the show. Which is what this article is all about – to show you how to join the Patrol from all around the world. But first, let us tell you a few words about the show itself…

What’s Doom Patrol all about?

Doom Patrol is a TV series based on the DC Comics superhero team of the same name. It features some of the same characters as another show, Titans, though the two shows are set in separate continuities.

Doom Patrol follows the unlikely heroes all of whom received their powers through tragic circumstances and are generally shunned by society. Most members of the team were treated by the Chief, a medical doctor who gave them residence in his mansion to help protect them from the outside world. Their name derives from an earlier Doom Patrol team that was formed by the Chief.

In the first season, the Chief is captured by the malevolent Mr. Nobody, sending the Doom Patrol on a journey to rescue him. Along the way, they discover secrets about themselves and the Chief, whom they eventually learn is responsible for the tragic events that gave them their powers.

In the second season, after rescuing the Chief’s powerful daughter Dorothy, the team tries to find a way to prolong his life so he can continue caring for her; if he dies before her, they would have to protect her.

Doom Patrol premiered on February 15, 2019, exclusively on the DC Universe streaming service. The second season aired on both DC Universe and HBO Max, with the two streaming services releasing episodes simultaneously on June 25, 2020. In some parts of the world, Doom Patrol is available through HBO Go and select domestic stations that acquired the rights for the show.

In September 2020, the series was renewed for a third season exclusively on HBO Max.

How to watch Doom Patrol in the US?

As noted above, Doom Patrol is available on DC Universe and HBO Max, with the latter having exclusive rights for the upcoming third season. So, to join the show, you’ll have to get a subscription to one of the two services, and you’re good to go.

If you don’t want to pay for another streaming service, you can take advantage of the free trial offer, and binge your way through two seasons of Doom Patrol.

But if you want to keep watching even when you leave the U. S. of A. – you’ll need a VPN in order to trick servers of HBO Max or DC Universe into thinking that you’re in the United States — whereas in reality, you could be on the other side of the globe. Which puts you in a similar position as the rest of the world…

How to watch Doom Patrol from all around the world?

Aside from the US, Doom Patrol was also — at least initially — available in the UK and Australia where it was airing on Starz TV (UK), and Foxtel Now and Binge (Australia). Later on, it hit HBO Go, allowing people from other parts of the world to enjoy the show, as well.

Nevertheless, DC fans prefer to watch it on DC Universe, which for $7.99 lets them watch all the superhero content they want. The service comes with a 7-day free trial, during which you could (for instance) binge the first two seasons of Doom Patrol.

However, in order to sign-up for DC Universe, you’ll first need to turn on your VPN app and connect to a US-based server. Otherwise, the service won’t let you in.

Once that part is done, create an account, add your credit card and you’re good to go. Again, there is a free 7-day which you could use to watch as much Superman, Batman and other shows as you want. But, if you’re a true fan – chances are you’ll stick with the DC Universe. 😉

Don’t get a VPN only for Doom Patrol

A good VPN has much more to offer and there is no need to limit its use case only to watching one show, no matter how cool it is.

Aside from letting you access streaming services that could otherwise be outside of your reach, a VPN will also enable you to bypass other restrictions that could be imposed in your school, university, workplace, and even in the country you live in – or plan to visit.

Furthermore, it will make accessing public Wi-Fi hotspot much more secure, encrypting all the data traveling to and from your devices and the rest of the Internet.

Finally, the ability to connect to other servers will protect your privacy online, with Big Tech companies having a hard time following you online. And the same goes for various government agencies which seemingly can’t get enough of our data.