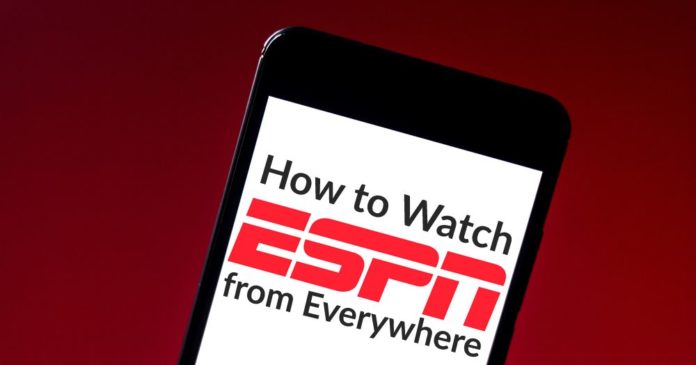 So you wanna watch ESPN outside of the United States?

Not a problem, get a VPN to bypass geo-restrictions while also benefiting from other bells and whistles a modern VPN service has to offer.

Why watch ESPN in the first place?

Those living under a rock should know ESPN is a U.S.-based pay television sports network owned jointly by The Walt Disney Company (80%) and Hearst Communications (20%). Founded in 1979, ESPN broadcasts primarily from its HQ studio facilities located in Bristol, Connecticut, as well as from its offices in Miami, New York City, Seattle, Charlotte, and Los Angeles.

As of January 2016, ESPN is available to around 91 million paid television households (~ 78% of households with at least one television set) in the United States. In addition to its channels in the United States, ESPN broadcasts in more than 200 countries — operating regional channels in Australia, Brazil, Latin America and the United Kingdom; and owning a 20% interest in The Sports Network (TSN) as well as its five sister networks in Canada.

Online, ESPN offers 10 channels in addition to its on-demand feature. Said channels include:

To sum it up — if you care about sports, you are probably already watching ESPN.

How to watch ESPN outside of the United States?

But that’s not the end of the road for you; get a good VPN to bypass ESPN’s geo-restrictions as well as other restrictions that may be imposed by such (video streaming) services.

Once you start a VPN, your computer or phone gets a new IP address and if you selected a server in the U.S. – you will get a US-based IP address. And voila – now you can watch all the sports you want. Hop over to ESPN.com select the channel or sport you’re interested in and follow instructions provided on the screen.

There is one “but” here, though. ESPN is not free although it comes included with most cable subscriptions. If you have that, you can still enjoy watching sports on your travels to other countries (you will have to log in with your credentials). Otherwise, well, you will have to look elsewhere for sports streaming.

In addition to your phone and computer, you can also set up your router to work with a VPN and have all devices in your home or office benefit from a more secure experience. This way, you will also be able to watch ESPN on your smart/connected TV, if you have one.

A VPN lets you do much more…

Aside from unlocking geo-restricted content, a VPN will also prevent anybody from spying on your online activity. It will do this by encrypting all the traffic coming to and from your device(s) — cause you can connect multiple devices to a VPN. Furthermore, some VPNs will even block ads on websites, providing you with an ad-free experience.

We think everyone should run a VPN on his/her computer and smartphone. In fact, whether you’re going to watch ESPN or not is of less importance. What you do want is what we call an “unlocked experience” that lets you access all the content in the world. Plus, you don’t want to share your web whereabout with any government or corporation. And that’s what VPN is all about. Start by checking our list of Top 5 VPNs…