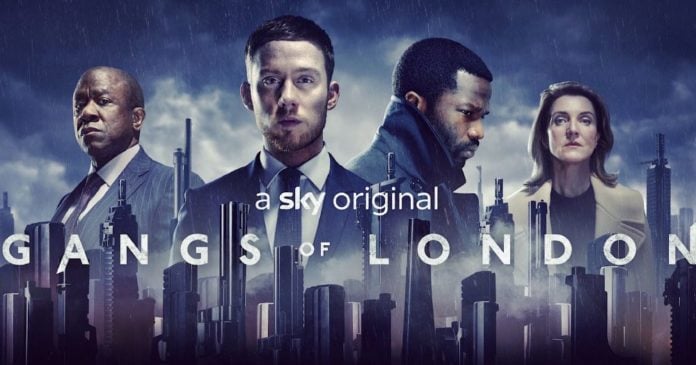 You may have heard of Gangs of London, the popular new show that has been released just when lockdowns have started. That, obviously, played part in helping it become an instant hit. Add the fact that all nine episodes from the first season have been released in a batch – and you get a winning formula.

And, unsurprisingly, people from all over the world want to watch it, but can’t do it. At least not without a VPN — which is what this article is all about.

What Gangs of London is all about?

Led by Peaky Blinders star Joe Cole, the gangland drama is brutal and bloody, while managing to tell the compelling story of a power vacuum among the gangs of London after a crime lord (Finn Wallace) is mistakenly gunned down.

Joe Cole plays the late big boss’ son Sean Wallace, who faces a number of challenges on the way of restoring order among the various intertwined gangs while also gunning to avenge his late father.

Aside from gangs, there is also a newcomer to the Wallace family Elliot Finch (Sope Dirisu), who secretly is an undercover policeman building a case against the Wallace Family organization.

At the moment, there is just one season of Gangs of London, but the second one has been commissioned and will likely be released next year with AMC chipping in as a co-producer.

The series became Sky Atlantic’s second-biggest original drama launch of all time, with a 7-day cumulative audience of 2.23 million viewers for the opening episode.

How to watch Gangs of London in the UK?

In the UK, the series is available on Sky, which lets its users download the whole season onto their boxes or computers.

Those without a premium subscription can tune in to Sky Atlantic on Thursdays at 9pm to watch the show in weekly installments.

Gangs of London can also be enjoyed with a NOW TV Entertainment pass — which also lets you watch the entire show. The service offers a seven-day free trial, meaning you can watch the entire series without paying a single penny (and then cancel your trial, if you want that).

How to watch Gangs of London from anywhere?

If you can’t sign-up for Sky or NOW TV Entertainment from your location, you’ll have to use a VPN to first connect to some UK-based server and only then join the service. As we have noted above, NOW TV Entertainment has a week-long free trial period which you could use to binge the entire first season of Gangs of London. After that, well, you may decide that you’re money is better spent in some different way.

Now, fire-up your VPN app every time you want to watch Gangs of London and enjoy the show. This, of course, presumes that you’re actually shutting down your VPN from time to time. Which I don’t, in case you wonder…

Get a VPN for all your needs…

Aside from letting you watch great movies and TV shows from anywhere, a good VPN will also help you keep a low profile on the web. Why would you want Google and Facebook to know your online whereabouts? You wouldn’t, right? And the same goes for various government agencies that seemingly can’t get enough of our data.

Also, you get to use this same anonymity to download and upload files via BitTorrent without anyone knowing what you’re doing. That being said, we must add that we don’t support piracy in any shape or form. If you’re going to use, watch or listen to something – pay for it. That’s the way it should be.

The most important thing about a VPN is that it encrypts all your traffic, making connecting to public Wi-Fi hotspots much more secure. By doing this, a VPN blocks the so-called “man in the middle” attacks in which a malicious actor could get ahold of your personal information.

Finally, a VPN will help you bypass all other restrictions that could be imposed in your workplace, school or some country you plan to visit (or live in).

Best VPN apps run across devices and platforms, and some even include router support so you could protect your entire network, both at home and work. This in turn means that devices like smart TVs, gaming consoles, and streaming boxes get to benefit from a VPN connection, as well.

Yup, if you still don’t have a VPN – now’s the time to “push the button.” Hop over to this page to see Best of the Best VPNs, make your pick and take it from there. It’s that easy. 😉