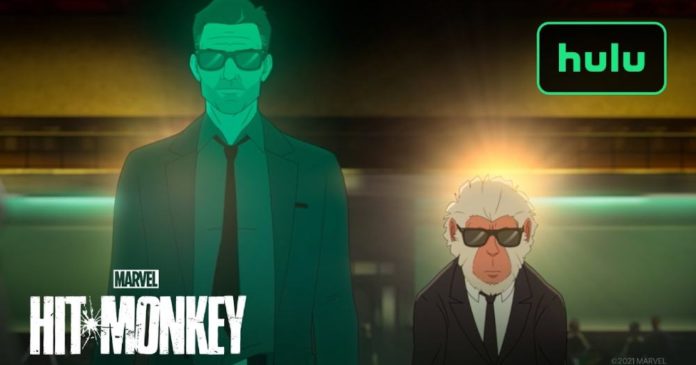 Hit-Monkey may not be as popular as Marvel’s other heroes like Spiderman or Iron Man, but that doesn’t mean some folks don’t like it. The first comic appeared in 2010 so it’s still in its early days, after all. Nevertheless, from what we can tell – it will be a hit, though you may have to use a VPN in order to keep up with Hit-Monkey’s adventures.

You see, the series is heading to Hulu, which still has a limited reach. Except, again, if you use a VPN. We’ll tell you how to access Hulu from anywhere, but first let us explain Hit-Monkey to those who still haven’t heard about it…

Hit-Monkey is Marvel’s adult animated streaming series created for Hulu and based on the Marvel Comics character of the same name. The series is produced by Marvel Television, but because of its “adult nature” it is not available on Disney+.

If you still haven’t heard of it, the comic and the TV series follows Hit-Monkey, an unjust Japanese snow monkey who is mentored by an American assassin’s ghost while he damages Tokyo’s crime underworld.

The Hit-Monkey character was created by writer Daniel Way and artist Dalibor Talajić, and first appeared in April 2010 as a digital comic on Marvel Digital Comics Unlimited. The one-shot was released in print format a week later and, starting in the same month, he was featured in a three-issue story arc in Deadpool #19-21.

The Hit-Monkey TV series will be a part of a group of series based on Marvel characters that were intended to lead to a crossover special titled The Offenders. The first Hit-Monkey show will be released on November 17, 2021.

How to watch Hit-Monkey from all around the world

As noted above, the series is coming to Hulu, which unfortunately is not available in many places around the world. For those places — as well as for Americans traveling abroad — there are VPNs that let users have a virtual presence in the United States. From there on, they can access Hulu as well as any other (streaming) service that would otherwise be outside of their reach.

Non-Americans looking to sign-up for Hulu will either have to get an American credit card or pay for the service with a gift card. For the latter option, there’s MyGiftCardSUPPLY from where you can also find gift cards for many other services.

Once you have that gift card, it’s time to determine which Hulu plan works best for you. The most affordable option includes ads and is available for $6. The ad-free plan costs $12, and there is also the one that also includes live TV and is selling for north of $50. A free trial is available on all plans.

But before selecting a plan, turn on your VPN app, connect to a US-based server and you’re good to go.

Nevertheless, we never advise users to get a VPN for any single service, cause…

We would argue that the main purpose of a VPN is to make users anonymous online so that the Big Tech and various government agencies can’t follow them on the Internet.

It does that by routing all Internet traffic through its servers that are spread across the world. And it is this same capability that lets you unlock streaming services like Hulu.

Moreover, a VPN will keep you protected while connecting to public Wi-Fi hotspots, while also hiding your Internet activity from your ISP.

Since so many different parties want a piece of our data these days, we think everyone should have a VPN. That being said, we suggest you start with our list of Best of the Best VPNs and take it from there. In just a few clicks, you’ll be surfing the world wide web without anyone knowing a thing about it. And that’s just the way we like it. 😉