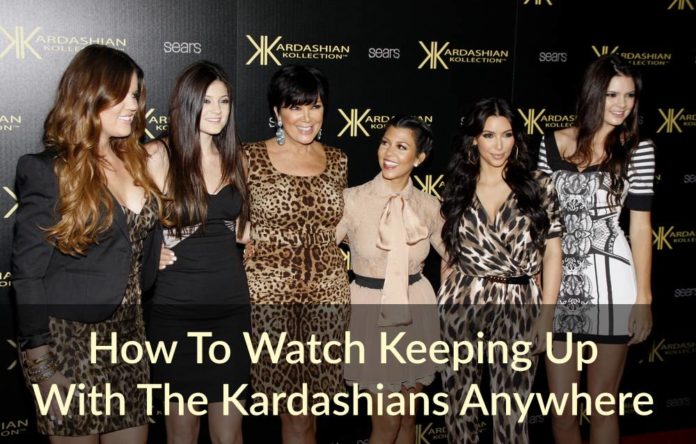 The Kardashians show is as polarizing as many other things in the world these days. Some people can’t stand the entire family, whereas others can’t get enough of them. This piece is, obviously, for the latter group who may like to keep up with the celebrity family even when they are not in the U.S. Or for those not living in the U.S. in the first place but would like to get a piece of the action, nonetheless.

The Kardashians show for newbies

The Keeping Up with the Kardashians (often abbreviated KUWTK) show focuses on the personal and professional lives of the Kardashian-Jenner blended family. Airing on the E! cable network, it debuted on October 14, 2007, and has subsequently become one of the longest-running reality television series in the U.S. The sixteenth season premiered on March 31, 2019, while the seventeenth season will premiere on September 15, 2019.

The series focuses mainly on sisters Kourtney, Kim, and Khloé Kardashian and their half-sisters Kendall and Kylie Jenner. It also features their parents Kris and Caitlyn Jenner (previously known as Bruce Jenner), and brother Rob Kardashian. The significant others of the Kardashian sisters have also appeared on the show — including Kourtney’s ex-boyfriend Scott Disick, Kim’s ex-husband Kris Humphries, and current husband Kanye West; Khloé’s ex-husband Lamar Odom, ex-boyfriend French Montana, and ex-fiancé Tristan Thompson. Caitlyn’s son Brody Jenner is also on the show from time to time, along with brother Brandon and Brandon’s wife Leah. Kim’s friend Jonathan Cheban and Khloé’s friend Malika Haqq have also been part of the show.

Despite some negative reviews, Keeping Up with the Kardashians has attracted high viewership ratings, becoming one of the network’s most successful shows and winning several audience awards.

How to Keep up With the Kardashians in the US?

In the US, all the different Kardashian shows are available on the E! cable network. On the network’s website, the celebrity family has its own page from where you can watch previous episodes and even tune into the show as it’s airing. Also included are select clips from the show.

This content, however, is not available throughout the globe with local networks owning the rights for broadcasting. If you don’t want to deal with their schedule(s) and would prefer to join the party as it happens — or the show is not available in your country — you can bypass these restrictions with a VPN. Which leads us to our next point…

How to watch the Kardashians show outside of the US?

As we’ve noted above, you’ll need a VPN and for the “best tool for the job” we suggest going through our list of Top 5 VPNs.

Also, you will need a SlingTV account for which you should sign-up only after connecting to a US-based server. Even before that, you will have to buy yourself a SlingTV gift card from MyGiftCardSUPPLY as the service requires credit cards issued in the U.S. to sign-up (or a gift card).

For those who haven’t heard of it, SlingTV lets you watch a selection of major cable channels from your computer and other connected devices.

So first buy that gift card and hop over to sling.com. At the bottom of the page, click on the “Redeem Gift Card” link and follow the instructions provided on the page.

Set up the account, log in to SlingTV, sit back and watch the Kardashians “do their thing.” Yes, it’s slightly more complicated than watching other content, but not that much. And besides, it’s not like you’ll be using VPN just for watching Kardashians, right?

Again, our list of Top 5 VPNs includes all the best VPNs which have been proven to work on numerous occasions so you can hardly miss by choosing any one of them. For the best experience, get the top service and forget about it. Let it do its magic in the background as you safely and securely browse the web, download files and, yes — watch adventures of Kris Jenner’s wider family.