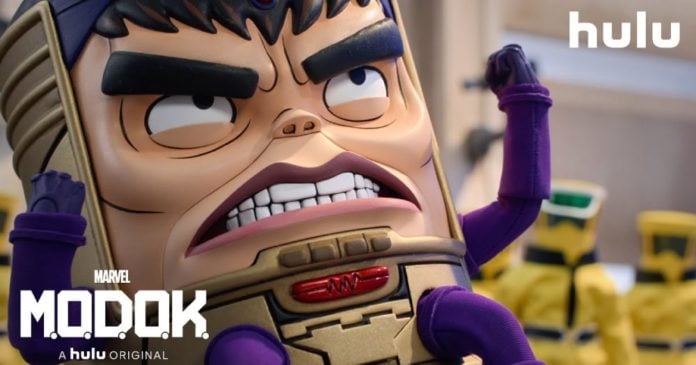 Marvel’s M.O.D.O.K. is a stop-motion adult animated streaming series created by Jordan Blum and Patton Oswalt for Hulu, based on the Marvel Comics character of the same name. The series is produced by Marvel Television but, as noted, it is not streaming through Disney+ but Hulu.

Before sharing how you can watch M.O.D.O.K. from anywhere, let us briefly explain the show for those who still haven’t heard of it…

M.O.D.O.K. was officially announced with a series order at Hulu in February 2019, as part of a group of series based on Marvel characters that were intended to lead to a crossover special titled The Offenders, with it being produced by Marvel Television. Oversight of the series was moved to Marvel Studios in December 2019 when Marvel Television was folded into that company.

The series follows M.O.D.O.K. after spending years failing to gain control of the world and battling superheroes along the way. He has been removed from his company A.I.M. which has been sold to the rival evil corporation GRUMBL (Just Be Evil), and now M.O.D.O.K. begins to deal with his taunting family while facing a midlife crisis.

The review aggregator website Rotten Tomatoes reports an 88% approval rating with an average rating of 7.77/10 based on 33 critic reviews. The website’s critical consensus reads: “Though its tendency toward too-muchness may test some viewers’ patience, slick stop-motion, a killer voice cast, and a seemingly endless well of jokes make M.O.D.O.K. an entertainingly chaotic diversion.” On Metacritic, the series has a weighted average score of 74 out of 100 based on 7 critic reviews, indicating “generally favorable reviews”.

In the US, M.O.D.O.K. is not available on Disney+ like other Marvel titles, but through Hulu, which also happens to be owned by the Walt Disney Corporation.

If you’re in the U.S. – you can sign-up for Hulu starting from $5.99 per month, which is their ad-supported plan. You can also get it as part of the Disney+ Bundle that includes access to Hulu along with Disney+ and ESPN+ for just $12.99 per month. With this plan, you get access to more content than any human can chew.

However, if you’re not in the United States – you can use a VPN to trick Hulu’s and Disney’s servers into “thinking” that you’re on U.S. soil.

Once you get a VPN, connect to a US-based server and sign-up for Hulu or the mentioned Disney+ Bundle. You will also need a way to pay for the subscription, since Hulu won’t accept a credit card that is not issued in the United States. For this, we suggest using a gift card, which you can get from MyGiftCardSUPPLY – where you can find gift cards for all popular entertainment platforms.

Now, with all that done, you can sign-up for Hulu (or Disney+ Bundle) – choose to pay with a gift card and you’re good to go. It’s actually easier than it sounds, and you only have to do it once.

Beyond accessing any streaming service, a VPN will also protect your privacy on the Internet. This, we would argue, is its main purpose – to make you anonymous online so that the likes of Google and Facebook can’t easily follow every step you make. And the same goes for various government agencies.

Furthermore, a VPN will also keep you protected when connecting to public Wi-Fi hotspots. It will encrypt all traffic coming to and from your devices, thus shielding you from the so-called “man in the middle” attacks. In case you haven’t heard, the number of these attacks has been increasing in recent years, but luckily – so has the use of VPNs.

Finally, it’s worth mentioning VPN’s ability to bypass other kinds of restrictions, like those in schools, universities, workplaces and high-censorship countries. By connecting to a VPN server, that server will route all traffic between your device and the rest of the Internet, making it almost impossible for anyone to know what you’re up to on the Internet. As far as anyone sees – you’re just communicating with that server in a secure fashion. Because all traffic is encrypted, no authority will be able to know that you’re actually surfing the web, downloading files with BitTorrent, watching videos and so on.

In a nutshell, we think everyone should be using a VPN these days. And if you still don’t have one, check out our page with Best of the Best VPNs and take it from there. Before you know it, you’ll be watching M.O.D.O.K. and enjoying all other benefits a great VPN has to offer.