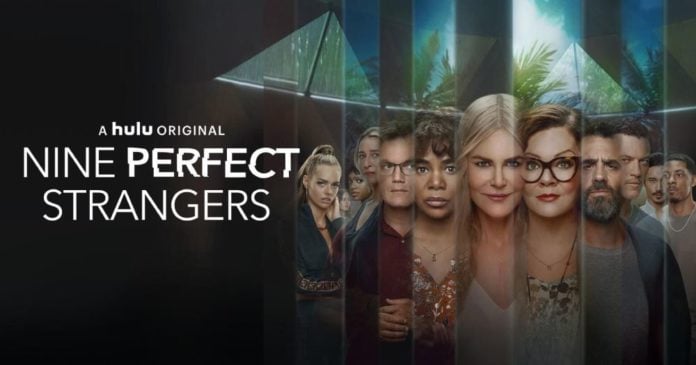 Another day, another great series hitting the digital airwaves. This time the name of the show is Nine Perfect Strangers and it stars the likes of Nicole Kidman, Melissa McCarthy, Luke Evans and Melvin Gregg, to name a few. Yes, it’s awesome but it’s not available in all places around the world. It’s a Hulu exclusive which you can’t watch if you don’t live in the United States. Except, that is, if you have a VPN – cause with a VPN, you get to unlock the Internet in its entirety. But first, let us explain Nine Perfect Strangers to those who still haven’t heard of it, shall we?

Nine Perfect Strangers is a drama streaming miniseries based on the 2018 novel of the same name by Liane Moriarty. Created by David E. Kelley and John Henry Butterworth, the series follows nine strangers from the city gathering for a 10-day retreat at Tranquillum House, a health and wellness resort which promises to transform and heal the guests who stay there. However, the resort is not what it seems to be and the guests are about to discover many secrets about each other and the resort’s host Masha.

Nine Perfect Strangers premiered on Hulu on August 18, 2021, with a new episode released weekly. Outside of the United States and China, the series is set to be released on Amazon Prime Video.

The review aggregator website Rotten Tomatoes reports a 70% approval rating with an average rating of 6.5/10, based on 10 critic reviews. Metacritic, which uses a weighted average, assigned a score of 66 out of 100 based on 5 critics, indicating “generally favorable reviews”.

How to watch Nine Perfect Strangers from all around the world

If you’re in the US, you can just sign-up for Hulu and you’re good to go. Otherwise, you may want to see whether you can watch it on Amazon Prime Video.

If that’s not an option, we suggest getting a good VPN and watching it “like Americans do” – on Hulu. For that effort, you will need to get yourself a Hulu gift card first — since you can’t sign-up for Hulu without an American credit card. You can get one of those gift cards from MyGiftCardSUPPLY.

The next step is to select a Hulu plan for yourself – there’s the ad-supported one for $6, the ad-free one for $12, and the one that bundles live TV that sells for more than $50 per month. There is a 7-day free trial with all plans.

Then, use the VPN to connect to a US-based server, pay for Hulu with a gift card and you’re good to go.

There is nothing wrong in getting a VPN just to watch one show, but that is a sort of overkill.

For starters, we think everyone should get a VPN to regain his/her privacy online so that Googles and Facebooks of the world can’t know every step they/we make on the Internet — and the same goes for various government agencies.

A VPN helps you keep a low profile by routing all Internet traffic through one of its servers; and this same capability also lets you unlock streaming services like Hulu.

Moreover, a VPN keeps you protected while accessing public Wi-Fi hotspots, while also hiding your Internet activity even from your ISP.

Since pretty much everyone wants a piece of our data these days, it is our belief that everyone should have a VPN running on all his/her devices. In that sense, we suggest checking our list of Best of the Best VPNs where you will most definitely find a VPN that suits all your needs — accessing Hulu from everywhere included. Sign-up today and never look back. 😉