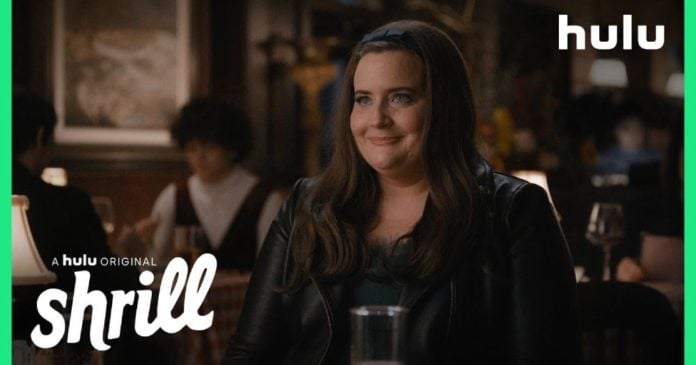 You may have heard of Shrill but are unsure whether you can watch it in your country? The series airs on Hulu but it could be available through other services outside of the United States. It is really hard to keep up with all those content rights deals…

Anyway, we know how you can watch Shrill on Hulu – with a VPN. This way, you will also get to access all other great content on the platform. And there’s a ton of it there.

Before we delve into details on how to do that, let us briefly explain the show to those who still haven’t heard of it…

What’s Shrill all about?

Shrill is a comedy streaming TV series, based on the book “Shrill: Notes from a Loud Woman” by Lindy West. Premiered on March 15, 2019, on Hulu – Shrill follows Annie, who is described as a fat young woman who wants to change her life — but not her body. Annie is trying to make it as a journalist while juggling bad boyfriends, sick parents and a perfectionist boss — while the world around her deems her not good enough because of her weight. She starts to realize that she’s as good as anyone else, and acts on it.

On review aggregator Rotten Tomatoes, Shrill holds an approval rating of 91% with an average rating of 7.83/10. The website’s critical consensus reads, “Sharp social commentary and a star-making performance from Aidy Bryant help Shrill overcome its familiar comedic sensibilities to create a show that proves self-acceptance isn’t one size fits all.” On Metacritic the series has a score of 74 out of 100, indicating “generally favorable reviews”.

How to watch Shrill from anywhere?

As noted above, the series is available through Hulu – so you know how to get it in the U.S. Just signing up for Hulu will be enough. Its plans start at $5.99 per month.

Alternatively, you may want to get Hulu as part of the Disney+ Bundle that includes access to Hulu along with Disney+ and ESPN+ for just $12.99 per month. That’s more content than any human can chew.

On the other hand, if you’re not in the United States, you’ll have to use a VPN in order to trick all those servers that you’re on U.S. soil. That’s just the way content rights work these days and there’s little we could do about it.

So once you have a virtual US location, you can sign-up for Hulu or that Disney+ Bundle we’ve mentioned. You may not be able to pay with your regular credit card, though. This is another security mechanism these services use, but luckily – it too could be circumvented with a gift card. For that, check out MyGiftCardSUPPLY where you can find gift cards for all popular entertainment platforms.

With that gift card in your “hand,” you are ready to sign-up for Hulu (or Disney+ Bundle) — just choose to pay with a gift card instead of a credit card. And you’re good to go.

Yes, this sounds complicated but in reality, it’s a 5-minute task that (we think) is well worth the effort.

Nevertheless, you should not get a VPN for any single service. Rather…

Beyond letting you access Hulu, Disney+, Netflix, HBO Max or any other streaming service – a VPN will also protect your privacy on the Internet. This is arguably its main purpose, to make you anonymous online so that the Googles and Facebooks of the world can’t easily follow you online. And the same goes for various government agencies.

In addition, using the same capability that lets you access Hulu, a VPN will also keep you protected while connecting to public Wi-Fi hotspots. It does that by encrypting all traffic coming to and from your devices, thus shielding you from the so-called “man in the middle” attacks. In case you wonder, the number of these attacks has been increasing in recent years, but luckily – so has the use of VPNs.

Finally, I’ll mention the VPN’s ability to let you bypass other kinds of restrictions, like those in schools, universities, workplaces and high-censorship countries. By connecting to a VPN server, that server will route all traffic between your device and the rest of the Internet. As far as the censors or the firewall sees – you’re just communicating with that server in a secure fashion. Because all traffic is encrypted, they won’t know that you’re actually surfing the web, downloading files with BitTorrent, watching videos and so on.

All in all, we think everyone should be using a VPN these days. And if you still don’t have one, we suggest checking out our page with Best of the Best VPNs – where you will find field-tested services that have been used by millions of users across the world.

So what are you waiting for? Check out that page and start watching Shrill today! 😉