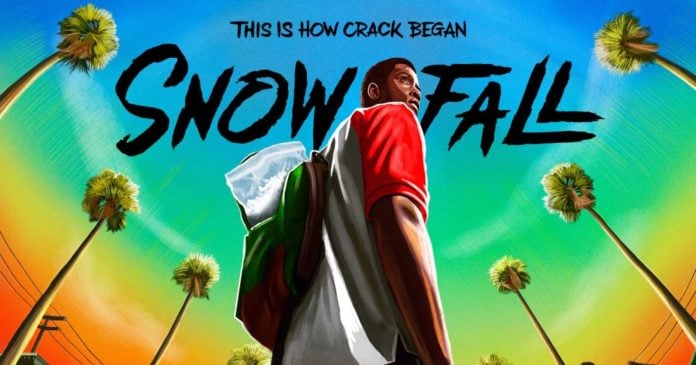 You may have heard of Snowfall, the popular crime drama series that is available online in some places, but not everywhere. Unfortunately, you can’t watch it from all over the world, at least not without a VPN.

We will explain how to join the party, but first – let us briefly describe Snowfall for those who still haven’t heard of it. Trust me – it’s worth your time.

What Snowfall is all about?

Snowfall is a crime drama series that was first broadcast on FX on July 5, 2017. Set in Los Angeles in 1983, it revolves around the first crack epidemic and its impact on the culture of the city. The series follows the stories of several characters whose lives are fated to intersect — including a 20-year-old drug dealer Franklin Saint, Mexican luchador Gustavo “El Oso” Zapata, CIA operative Teddy McDonald, and a Mexican crime boss’s niece, Lucia Villanueva.

Snowfall’s main cast and characters include:

On Rotten Tomatoes, the first season has an approval rating of 62% based on 63 reviews, with an average rating of 6.19/10. The site’s critical consensus reads, “Snowfall struggles to create a compelling drama from its separate storylines, despite Singleton’s accurate recreation of 1983 Los Angeles and a strong lead performance from Damson Idris.” On Metacritic, the series has a score of 62 out of 100, based on 38 critics, indicating “generally favorable reviews”.

How to watch Snowfall in the US?

The current Season 4 is available online on Hulu and FX, so between these two you can join the “watching party.” We’re all for Hulu which is a home of many great series and TV shows, but it’s your money so you’ll have to make a call.

If you are not sure that you’ll like Hulu, you can always take advantage of the 7-day free trial to test it out before committing a single cent of your hard-earned cash.

Again, we think Hulu offers a great deal and if you want to save – you can get its more affordable, ad-supported plan.

How to watch Snowfall from all around the world

Hulu is not available across the globe and you can’t even sign-up for it without an American credit card. But, there is a workaround – you can buy the subscription with a gift card. You can get one of those gift cards from MyGiftCardSUPPLY.

With that card in your (digital) wallet, it’s time to decide which Hulu plan works best for you. The ad-supported one goes for $6, while the ad-free one costs $12. Also, there is one that also includes live TV which costs a whopping $55 per month. For all plans, there is a 7-day free trial.

Then, once you have that gift card, fire up your VPN app, connect to a US-based server, and sign-up for the service. It’s rather easy.

The main purpose of a VPN is to make you anonymous online so that the likes of Google and Facebook, as well as various government agencies, can’t know your web whereabouts.

It does that by routing all Internet traffic through one of its servers that are spread all around the planet. And this same capability lets you unlock all streaming services, Hulu being one of them.

In addition, a VPN will keep you protected while accessing public Wi-Fi hotspots, while also hiding your Internet activity even from your ISP.

Considering that pretty much everyone wants a piece of our data these days, we think everyone should have a VPN. In that sense, we suggest checking out our list of Best of the Best VPNs and take it from there. Before you know it, you’ll be much more protected. 😉