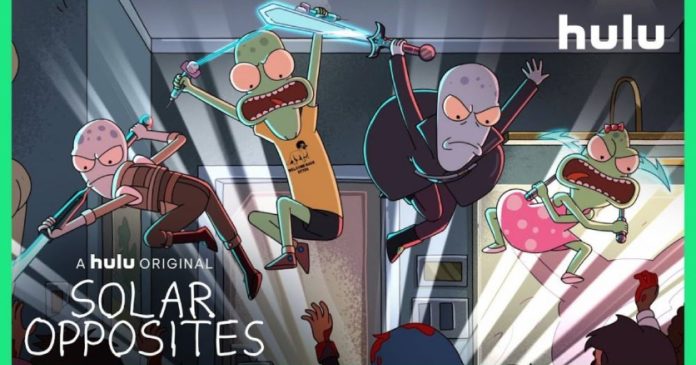 From the same folks who brought us Rick and Morty comes a new show – the Solar Opposites. It’s intriguing, funny and not for kids. I personally love it, but I can’t watch it without a VPN. Luckily, I have one readily available for these situations and have been using it to watch this rather amazing animated sitcom. You too can join the party with a VPN.

But first, let us explain the show to those who still haven’t heard of it:

What Solar Opposites is all about?

Solar Opposites is an adult animated sitcom created by Rick and Morty co-creator Justin Roiland and Mike McMahan for Hulu.

Solar Opposites “centers around a family of aliens from a better world who must take refuge in middle America. They disagree on whether this is awful or awesome.”

A parallel storyline follows a society of humans shrunk by the replicant Yumyulack and imprisoned in a terrarium known as “The Wall”.

Yes, it sounds crazy – but the stories are funny enough to keep you hooked to the screen for quite some time.

The main cast and characters include

On Rotten Tomatoes, season 1 has an approval rating of 92% based on reviews from 36 critics, with an average rating of 7.56/10. The website’s critical consensus states, “Charming, hilarious, and surprisingly sincere, Solar Opposites revels in the ridiculousness of life while finding a few fresh things to say about humanity along the way.”

On Metacritic, it has a weighted average score of 72 out of 100, based on reviews from 10 critics, indicating “generally favorable reviews”.

How to watch Solar Opposites from anywhere?

Solar Opposites is available online on Hulu, which you can try for free for the first 7 days. After that, you can sign-up for the service starting at $5.99 per month for an ad-supported plan.

The problem is that Hulu is not available from all around the world and that not all of its content is syndicated on other networks. So if you can’t find Solar Opposites in your local provider’s library, you can use a VPN to sign-up for Hulu and watch it “as Americans do.”

However, you may not be able to do that without an American credit card. Luckily, there is a workaround – you can buy the subscription with a gift card. For that, we suggest visiting MyGiftCardSUPPLY, where you can find gift cards for many popular streaming services.

With that card in your (digital) wallet, it’s time to decide which Hulu plan works best for you. As noted above, the ad-supported one goes for $6, while the ad-free one costs $12. Also, there is one that also includes live TV which costs north of $50 per month. For all plans, there is a 7-day free trial.

Then, fire up your VPN app, connect to a US-based server, and sign-up for the service. It’s rather easy.

We would argue that the main purpose of a VPN is to make you anonymous online so that the likes of Google, Facebook, and various government agencies can’t know your web whereabouts.

It does that by routing all Internet traffic through one of its servers that are spread all around the planet. And this same capability lets you unlock all streaming services, with Hulu being just one of them. There’s also US Netflix, HBO Max, Disney+, BBC iPlayer and so on.

In addition, a VPN will keep you protected when accessing public Wi-Fi hotspots, while also hiding your Internet activity even from your ISP.

These days pretty much everyone wants a piece of our data, so we think everyone should have a VPN. In that sense, we suggest checking out our list of Best of the Best VPNs and taking it from there. Yes, you can thank us later. 😉