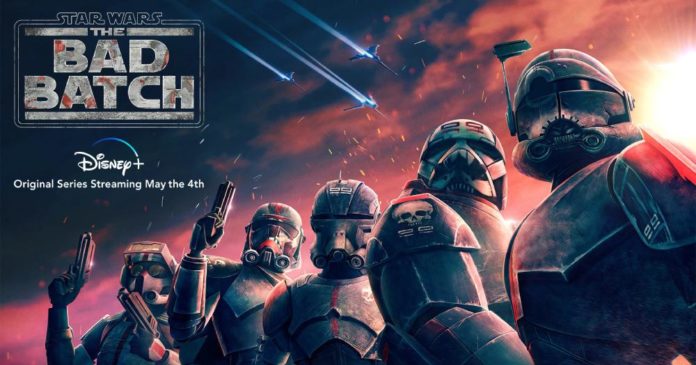 Star Wars fans were rejoicing when they learned the Clone Wars will get an extension in the form of a brand new show. And so The Bad Batch was born with fans of the force around the globe tuning in to watch every new episode as soon as it’s released. Actually, it’s the fans that can access Disney+ whereas the rest of the world has to wait for the Walt Disney Corporation to bring its streaming service to their countries.

Or, they could use a VPN to connect to, for instance, a US-based server and then sign-up for Disney+ — so they could watch all the good stuff this service has to offer (and that’s a lot).

Before we delve into details on how you too could join the latest Star Wars party, let us briefly explain what The Bad Batch is all about. Ready? Set… Go.

What Star Wars: The Bad Batch is all about?

Star Wars: The Bad Batch is an animated series created for Disney+. Part of the Star Wars franchise, it acts both as a sequel to, and a spin-off from, the series Star Wars: The Clone Wars.

The premise of the series follows Clone Force 99, also known as the Bad Batch, which represents a group of elite clone troopers with genetic mutations that were first introduced in Star Wars: The Clone Wars. This group is taking on daring mercenary missions in the aftermath of the Clone Wars.

Dee Bradley Baker stars as the Bad Batch, a squad of elite clone troopers with genetic mutations. He also voices other clones in the series, reprising his role from The Clone Wars. There is also the female clone known as Omega, which is portrayed by Michelle Ang. She is also an unmodified replication of Jango Fett.

The review aggregator website Rotten Tomatoes reported an 86% approval rating with an average rating of 7.15/10, based on 11 reviews. The website’s critics consensus reads, “The Bad Batch’s beautifully animated adventure may be too lore heavy for casual viewers, but fans will enjoy diving deeper into this dastardly cast of characters.” Metacritic, on its end, assigned the series a score of 67 out of 100 based on 7 critics, indicating “generally favorable reviews”.

How to watch Star Wars: The Bad Batch from anywhere?

The series airs on Disney+ which unfortunately is not available all around the world. Where it is available, you should sign-up for it and watch all the content this amazing platform has to offer. This would include shows and movies from Disney, Pixar, Marvel, and of course – Star Wars, as well as National Geographic.

If Disney+ is not available in your country, we suggest signing up for the US-based service and paying for it with a gift card. You can get one of those from Amazon and other online retailers.

With that gift card in your digital wallet, you can connect to a US-based VPN server and sign-up for Disney+. When prompted to pay, use the earlier bought gift card and you’re good to go.

And if you’re prompted to enter a US address, use some you find online. It’s not really a problem – and they won’t be checking it anyway.

While this may sound complicated, it really isn’t and shouldn’t take more than 5 minutes to complete. Before you know it, you’ll be watching all the content from Disney+ from anywhere.

Instead of getting a VPN only for Disney+ – get a VPN for all your needs which could include access to other streaming services, as well.

However, we would dare to say that the main purpose of a VPN is to make you anonymous online so that no one could follow your digital footprint. A VPN does that by routing all Internet traffic through its servers that are spread all around the globe. And this same capability lets you unlock all streaming services.

Moreover, a VPN keeps you protected while connecting to public Wi-Fi hotspots, while also hiding your Internet activity from your own ISP.

Considering the fact that many parties want a piece of our data, we think all of us should run a VPN on all of our devices. And since you’re into Star Wars, we suggest checking out our list of Best VPNs for Disney+. All services listed there will cover all your other needs, as well. So check it out and feel free to send us a “thank you” note afterward. 😉