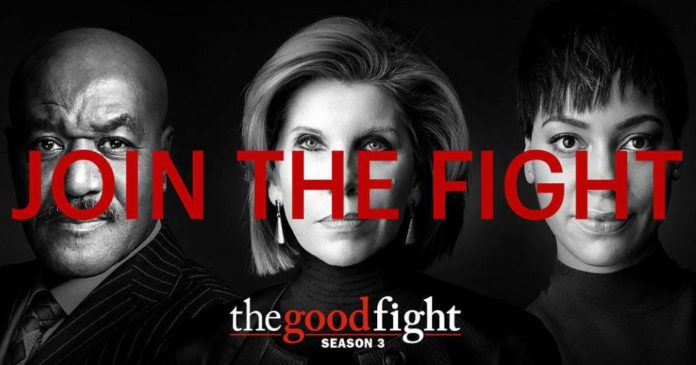 If you enjoyed The Good Wife, you’ll love The Good Fight. The series takes place a year after the series finale of The Good Wife, adding popular news and affairs to the storyline. So in addition to legal battles, it also explores issues such as the alt-right, the Me Too movement, online harassment, fake news, and more.

That being said, we can understand that you want to watch it from wherever you are. But it’s not as easy as we would like it to be. And we have geo-restrictions to blame for this…

Alas, this isn’t something that couldn’t be dealt with using a good VPN. But first, let’s talk more about the series, shall we?

The Good Fight is a legal web TV series produced for CBS’s streaming service CBS All Access. It is is a spin-off and sequel to The Good Wife and also the first original scripted series for CBS’ service.

The Good Fight takes place a year after the series finale of The Good Wife, when an enormous financial scam destroys the reputation of young lawyer Maia Rindell and wipes out the savings of her mentor, Diane Lockhart. The two are forced out of Lockhart, Deckler, Gussman, Lee, Lyman, Gilbert-Lurie, Kagan, Tannebaum, & Associates and join Diane’s former employee Lucca Quinn at Reddick, Boseman, & Kolstad — a prestigious African American-owned firm making waves by taking on Illinois police brutality cases.

The show deals primarily with the storylines of its three female leads — Diane, Lucca, and Maia — and contains considerable political and social commentary, exploring topical issues such as the alt-right, the Me Too movement, online harassment, and fake news. As well as starting again in a new firm with its own office politics to deal with, longtime Democrat Diane must navigate a world she hardly recognizes, becoming increasingly troubled by Trump-era politics and the actions of his administration.

Like The Good Wife, the show makes use of an extensive cast of supporting characters — including a recurring stable of opposing counsel, clients, police officers, FBI agents, judges, and politicians. Many are played by well-known guest stars.

The first season contains 10 episodes, and premiered on February 19, 2017, with the first episode airing on CBS and the following nine episodes on CBS All Access. The Good Fight’s third season premiered on March 14, 2019. In April 2019, the series was renewed for a fourth season.

How to watch The Good Fight in the U.S.

The problem is in other parts of the world (outside of the U.S.) and this also affects Americans traveling overseas. They won’t be able to watch the show without a VPN, with CBS’ servers blocking access to non-US IP addresses. So the obvious next question is…

How to watch The Good Fight from anywhere

Simply put – you’ll need a VPN, which will mask your IP address and replace it with one of its servers. You should connect to a US-based server, and once that part is done — you can enjoy all CBS’ shows, not just The Good Fight.

You will still need a valid CBS All Access subscription, though. If you already don’t have it — you can sign-up for free (trial). Here’s how to do it:

Start a VPN, connect to a US-based server, and then head over to CBS.com. Now go to “CBS All Access” and find a button to start a 7-day free trial. Now you can watch The Good Fight as much as you want… plus all other shows that are available on CBS’ streaming service.

A VPN can do much more than that…

Aside from letting you watch The Good Fight and other geo-restricted content, a good VPN will also help you regain your privacy. You get to anonymously browse the web, download files and do just about anything else without worrying that governments and major corporations are watching.

You also get to conduct your business in a secure manner, connecting from previously defined IP addresses to your office wherever it happens to be. Plus, connecting to public Wi-Fi hotspots is no longer a risky endeavor, with VPN encrypting all communication between your device and the server you’re visiting. Which, again, is the same capability that prevents even your ISP from knowing what you’re doing online. And that’s rather important, with some ISPs throttling internet speeds for activities such as video streaming and torrenting.

All in all, with a VPN you get more freedom. So yes, you need a VPN and you need it now. Check out our list of Best of the Best VPNs, and take it from there. You’ll thank us later. 😉