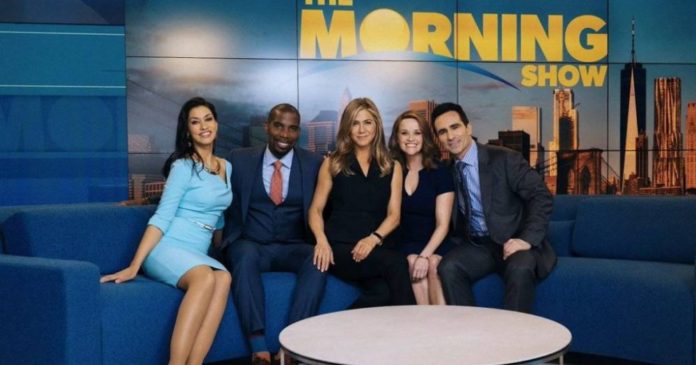 Chances are you have heard of The Morning Show, the TV series that is exclusively available on Apple TV+. It’s a good show, produced with a solid budget — we’re talking about an iPhone maker here, after all — and unsurprisingly, people from all around the world want to join the ride.

In order to do that, however, they need a VPN… More on that in a moment, let’s first describe The Morning Show for those who are still clueless about it…

What The Morning Show is all about?

The Morning Show, also known as Morning Wars in Australia and Indonesia, is a drama streaming series starring Jennifer Aniston, Reese Witherspoon, and Steve Carell, which premiered on Apple TV+ on November 1, 2019.

In the series, Alex Levy anchors The Morning Show, a popular breakfast news program broadcast from Manhattan on the fictional UBA network that has excellent viewership ratings and is perceived to have changed the face of American television.

After her on-air partner of 15 years, Mitch Kessler, is fired amidst a sexual misconduct scandal – Alex fights to retain her job as top news anchor while sparking a rivalry with Bradley Jackson, a haphazard field reporter whose series of impulsive decisions bring her into a new world of TV journalism.

The Morning Show was inspired by Brian Stelter’s book “Top of the Morning: Inside the Cutthroat World of Morning TV.”

How to watch The Morning Show in the US and other places where Apple TV+ is available?

It is rather simple – you’ll just need an Apple TV+ subscription and you’re good to go.

The problem “occurs” when you want/have to travel and Apple TV+ may not be available in your destination. Then you’re pretty much in the same group as the rest of the world which still doesn’t have access to all the great content commissioned by the iPhone maker. Which is the point of the next section…

How to watch The Morning Show from all around the world?

The usual trick is to use a VPN to connect to the server in a country where Apple TV+ is available and then fire-up the show or movie you want to watch.

Your best bet is to connect to a US-based server where VPN operators have most servers. Then you’ll definitely get an HD or even 4K streaming quality with little to no buffering. If you select a VPN from our Best of the Best VPNs list, we can pretty much guarantee an awesome streaming experience.

With that in mind, it’s time to get those popcorn and enjoy the show.

Before that, we must add that you should…

Everything’s cool for getting a VPN just to watch one show, but why settle with that when you can get so much more.

You see, a VPN gets you what we would consider to be one of the most important things on today’s Internet – privacy. You have probably heard that Big Tech giants are watching every step you take online to create your digital profile and serve you what their algorithms deem to be relevant ads. In this process, you as a user become the product.

We don’t like that and instead love the idea of using a VPN to get anonymity online, which could come in handy when torrenting files or when you need to bypass some silly restrictions in your workplace, school, university and so on.

Finally, let’s not forget VPNs ability to keep you protected on public Wi-Fi hotspots when it will encrypt all data traveling between your devices and the rest of the Internet — making sure hackers can’t get any of your personal information.

I’d like to think a VPN is a must-have tool these days and something everyone should be using. To get one for yourself, hop over to the mentioned page with Best of the Best VPNs and take it from there. You’ll love it.