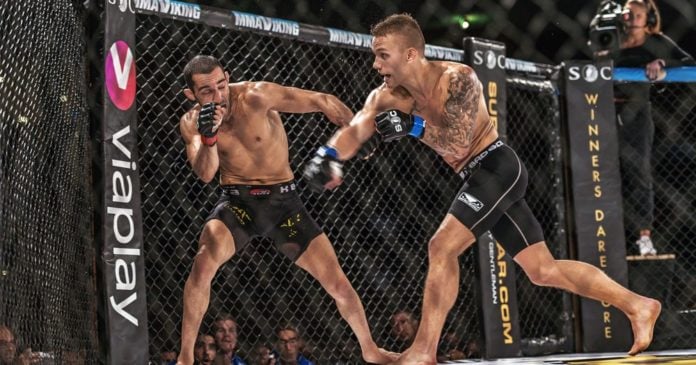 Not everyone likes UFC Fight Nights and that’s ok. Some think of these fights as modern-day gladiators while others find them barbarous. We’re not here to judge, we want to help those looking to tune into the UFC do it from all around the world.

As usual, the tool of the trade is VPN. But first, let’s explain what the UFC is all about.

UFC for the uninitiated

The Ultimate Fighting Championship, or UFC for short, is a mixed martial arts (MMA) promotion company based in Las Vegas, Nevada, which itself is owned by Endeavor Group Holdings along with Silver Lake Partners, Kohlberg Kravis Roberts and MSD Capital via Zuffa, LLC.

It’s a rather complicated ownership structure which I guess is justified since we’re talking about the largest MMA promotion company in the world with some of the highest-level fighters in the sport on its roster.

The UFC produces events across the world that showcase twelve weight divisions (eight men’s divisions and four women’s divisions) and abides by the Unified Rules of Mixed Martial Arts. As of 2020, the UFC has held over 500 events and — unsurprisingly — it is a multi-billion-dollar enterprise.

The original event took place at the McNichols Sports Arena in Denver, Colorado back in 1993. At that time, the idea was to identify the most effective martial art in a contest with minimal rules and no weight classes between competitors of different fighting disciplines like Boxing, Kickboxing, Brazilian Jiu-Jitsu, Sambo, Wrestling, Karate, Taekwondo, and Judo.

These days, the UFC has a huge mainstream media coverage, with ESPN being one of the company’s major partners.

Where to watch UFC around the world?

The UFC events are available in many parts of the world where they are mostly available on pay-per-view platforms.

Among the company’s partners are ESPN, BT Sport in the UK, SKY Satellite, Fox Sports, Globosat, Sony Ten and so on.

How to watch UFC in the U.S.

The first thing you should know is that there are no free, legit ways to do this. Producing UFC fights cost real money so they have to charge for that.

Yes, there are some free sources that are everything but legit and could get you in trouble. You could also get a virus on your computer as a result of accessing such websites. And let me not go into the “experience” you’ll get from such services. Simply put – they may not have the resources to deliver a great stream to their website visitors.

Instead, you should get your UFC fix from the official website or some other respectable source such as ESPN, which lets you watch UFC fights on a Pay-Per-View basis through ESPN+.

If you’re already an ESPN+ subscriber, you’ll get an even better deal.

Between UFC’s official website and ESPN+, you should find your online home for watching UFC fights.

How to watch UFC from anywhere?

The answer is the same – the best way is to go through UFC’s official website or ESPN+.

However, because of the way licensing deals are made today, some fights — often the most exciting ones — are blocked in certain countries.

So, you’ll need a VPN to bypass these restrictions.

First, you’ll want to connect to a US-based server or to a server in a different country where the fight you want to watch is being streamed.

And then pay to watch, sit back and grab that popcorn.

If you *really* don’t want to pay to watch the fight, you can take advantage of the 7-day free trial offer on UFC’s website after which, well, you’ll have to chip in. If you’re into MMA fights, we’re sure it’s the money well spent for you.

Just make sure to…

Watching UFC is cool but you shouldn’t get a VPN only for that. This tool is not a one-trick pony and you could (and should) use it for many other things.

For start, it will let you securely connect to public Wi-Fi hotspots, encrypting all data coming to and from your devices. This, in turn, will make it impossible for hackers to snoop into your traffic, potentially getting ahold of your personal information.

Also, a VPN will let you access all kinds of streaming services from around the world. And the same goes for bypassing various restrictions that may be imposed in your school, workplace and the country you’re visiting.

And that’s just a start; the bottom line is, with a VPN you get anonymity on the Internet and that — we think — is a big deal, considering that government agencies and tech giants are watching every step we make. It is a tool that will get you your online freedom back. So use it by all means.

Start by checking our list of Best of the Best VPNs and take it from there. Yes, you’ll thank us later. 😉