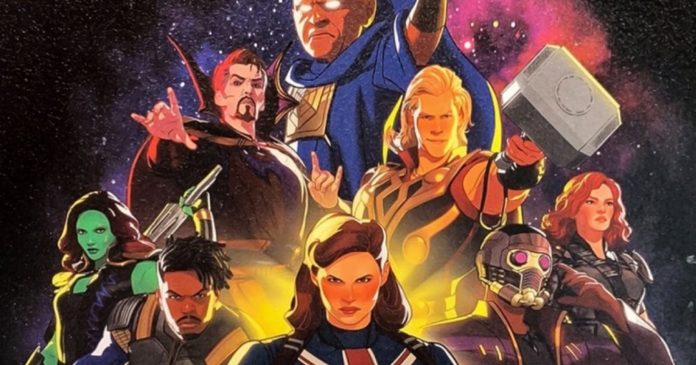 While we’re still digesting Loki, we’re also bracing ourselves for another great Marvel series. This time it’s an animated show called “What If…?” and from what we’re getting – it will be amazing to watch.

For those who haven’t heard of it, the series will explore what would happen if major moments from Marvel’s films occurred differently. More on the series is below, followed by instructions on how you too can join the watching party. Read on…

What If…? is an animated anthology series based on the Marvel Comics series of the same name. Coming soon to Disney+, it explores what would happen if major moments from the films of the Marvel Cinematic Universe (MCU) occurred differently.

Jeffrey Wright stars as the Watcher, who narrates the series, with many other characters being voiced by the actors who portray them in the films. In case you wonder, the animation for the first season is provided by Squeeze and Flying Bark Productions, with Stephan Franck as head of animation.

In case you’re not that familiar with the Marvel Universe, you may be wondering who’s The Watcher. Also known as Uatu, he (or that’s “it”) is a member of the extraterrestrial Watcher race, who observes the multiverse and occasionally intervenes with events therein. The Watcher is described as being “above everything else.”

What If…?’s first season is scheduled to premiere on August 11, 2021, and will consist of 10 episodes. It will be part of Phase Four of the MCU. A second 10-episode season is in development.

How to watch What If…? from all around the world

As noted above, the series will air on Disney+ which, unfortunately, is not available all around the world. Where you can access it, you should sign-up right now (if you still haven’t) and get all the content this amazing streaming platform has to offer. And this would include shows and movies from Disney, Pixar, Star Wars, and of course — Marvel, as well as National Geographic. In other words, there is something for everyone.

If you can’t access Disney+ from your country, you can sign up for the US-based “version.” And for that, you will need a Disney+ gift card which can be bought from Amazon and elsewhere.

Then, you can connect to a US-based VPN server and sign-up for the service. When prompted to pay, use the earlier bought gift card and you’re good to go.

Also, you may be asked to enter some US address, which you are free to invent or find one online.

This may sound more complicated but it really takes just 5 minutes. Before you know it, you’ll be watching all the great stuff from Disney+.

Instead of going for a VPN only to access Disney+ — though that seems pretty reasonable to us — get a VPN for all your needs and unlock access to all streaming services as part of the deal.

The main idea of a VPN is to make you anonymous online so that tech giants and various government agencies can’t follow your digital footprint.

A VPN does that by routing all Internet traffic through its servers that are located in countries around the planet. And this same capability lets you unlock all streaming services you want.

Moreover, a VPN keeps you protected while connecting to public Wi-Fi hotspots, while hiding your Internet activity from your own ISP.

Since multiple entities are looking to get a piece of our data, we believe everyone should run a VPN on all of his/her devices. And since you’re into Marvel, we suggest starting with our list of Best VPNs for Disney+. The services on that page will cover all your other needs, as well. So check it out and do let us know if you have any questions.