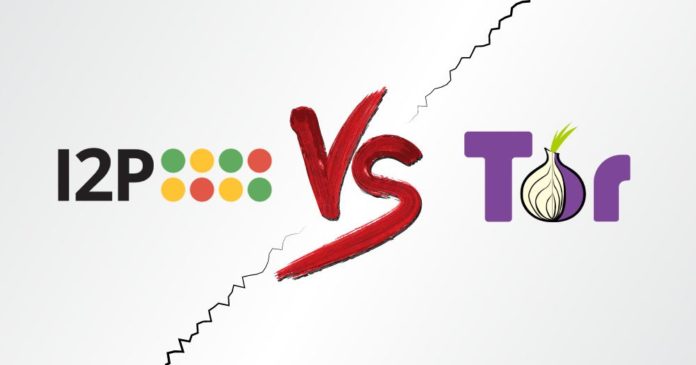 In one of our previous articles, we’ve put Tor against VPN and now we’re looking at how Tor compares to I2P. Let’s take a look at both technologies and come to the conclusion which of these two technologies you should use on a daily basis.

I2P, which stands for Invisible Internet Project, is an anonymous networking tool similar to the Tor system, but it’s also a bit different. Like Tor, it too is a peer-to-peer (P2P) anonymous network that protects users from censorship, government surveillance, and other online monitoring. I2P scatters your traffic reducing the chance that a third-party will be able to intercept it.

Also, by using I2P you can also get an encrypted entrance to the dark web – which is what Tor enables you to do as well. However, I2P goes beyond web browsing to also include other services to the mix, such as instant messaging, torrenting, file storing, and website hosting.

How does I2P work?

As a decentralized P2P network, I2P relies on its vast global community that currently counts more than 50,000 devices. It encrypts your traffic with end-to-end encryption and routes it via a volunteer-maintained network, with each member of this network sharing resources (bandwidth) with the rest of the community.

Aside from relying on end-to-end encryption to protect the endpoints of your data route, I2P’s security also stems from using unidirectional tunnels which separate incoming and outgoing traffic to provide more anonymity.

Also, unlike Tor onion routing, I2P uses so-called garlic routing. This divides your message into smaller messages, called cloves. These are all encrypted and travel separately until their destinations. As a result, it is almost impossible for an interceptor to get hold of the whole message and perform traffic analysis.

How does I2P compare to Tor?

To sum it up, here’s how to the two technologies/networks compare against each other:

VPN remains the best choice for most users

And that would include myself… Simply put, a VPN is easier to use while offering comparable (if not better) security & privacy features. Also, it’s much faster than both Tor and I2P, as it doesn’t rely on a network of volunteers. Rather, VPN’s network of servers is operated by highly trained professionals whose jobs are dependent on keeping those machines secure and stable.

To put it differently, while Tor and I2P represent a great contribution to the overall society, there is only so much these projects could do for regular users looking to keep their Internet whereabouts under the radar, as well as to access some services that could otherwise be outside of their reach. I could hardly imagine using Tor or I2P for accessing a streaming service like Netflix, Disney+ or HBO Max. These services are not exactly meant for that, though neither is VPN – but it gets the job done perfectly.

So to conclude – if you’re a regular user, get a VPN and forget about it. Let it do its work in the background as you safely browse the web, download files with BitTorrent, stream movies and TV shows, and more. Find a perfect VPN for yourself from our page with Best of the Best VPNs. You can always thank us later. 😉