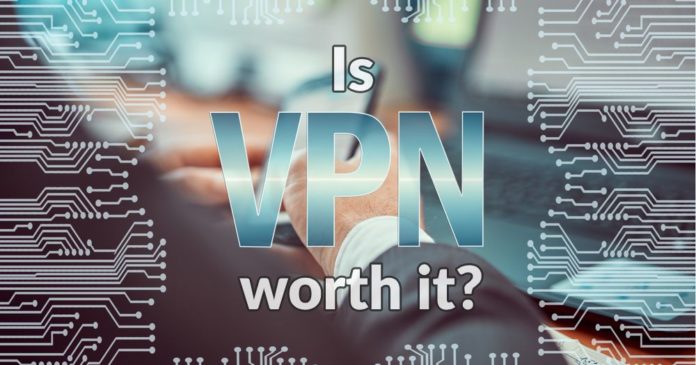 Let me start with a quick answer and then I’ll extrapolate in more detail – YES, a VPN is worth every penny you pay for it. Now, let’s dive into details presenting you first with modern challenges and then with a few arguments why we think a premium (paid) VPN service is worth the money…

In the “good ol’ days” all you needed was an anti-virus software on your computer and that was it. Today, however, every step you make online is being tracked by the likes of Google and Facebook, as well as a slew of government agencies. And while that may get us more personalized experiences — from Google and Facebook, not spy agencies — we have to give away our privacy in return.

Furthermore, security risks are higher than ever with savvy hackers being able to intercept your traffic to potentially get your personal data and cause havoc.

On the other hand, access to the Internet is being controlled and even partially blocked in some parts of the world. I’m not necessarily talking about countries like China and North Korea here; some bans are also in place at many workplaces, schools, universities and so on in the West.

A VPN is built to address all those challenges, keeping your more secure online while letting you access the Internet in its entirety. But I’m getting ahead of myself — here are the details why VPN is worth it…

At its core, a VPN is protecting your IP address from malicious actors who want to use it illegally.

For instance, when connecting to a public WiFi network – you’re running the risk of being in the “same space” with other users, some of which may be on the lookout to get ahold of your personal data.

In contrast, with a VPN turned on, your real IP address is masked and so are websites you’re visiting, with all communication being encrypted. So even if your data is stolen, it will be unreadable to third parties — making sure it cannot be used against you. This way, a VPN prevents the so-called “man in the middle attacks” which have been growing in popularity in recent years.

A VPN unlocks and unblocks the internet so you could access it in its entirety, with the best services managing to get around various geo-restrictions all around the world. This includes what is commonly referred to as the Great Firewall of China, which is a high-tech solution developed by China’s censors.

In other words, with VPN running on your devices, you get to access all the popular news websites and social media services that may be partially or completely banned in some countries as well as schools, offices and so on.

Simply fire-up your VPN app, connect to the server in the U.S. or Europe and you can freely roam the world wide web. Or access a popular video streaming service like Netflix or Disney+ that could otherwise be outside of your reach.

3. VPN helps you be anonymous online

Arguably one of the key reasons why everyone should get a VPN these days — it lets you be anonymous online. A VPN will change your IP address and show a different location to the site/server you’re accessing while encrypting all the traffic along the way. This will make it impossible for third parties to identify you on the Internet, and will feel like surfing the web in 1990’s — when there were no Internet giants to snoop into your/our privacy.

Speaking of which [privacy] – it has become a sort of luxury these days with tech conglomerates keeping up with every step we make online. With a VPN running on your devices, you get to regain your privacy for pennies per day.

4. VPN helps you save on airfare

You have probably noticed how the price of airline tickets dynamically changes throughout the week or, sometimes, even a single day. Airlines and sites like Orbitz and Expedia are notorious for their use of modern technologies that show different prices to different users.

Generally speaking, new users — those who search for an airline ticket for the first time — get a better price than those looking for the same ticket for the second or third time. The software running on the server can recognize this “intent to buy” and, consequently, show higher prices to more interested users.

With a VPN, you can simply connect to a different server and then search for the same ticket. As far as the airline is concerned, you are searching for that ticket for the first time and will get a better price.

What about free solutions?

By now you have hopefully realized that VPN brings along cool benefits, but what about free solutions? Can’t some of them “get the job done” as well?

There are many proxies services out there that have a free tier plan. Also, there is the Tor browser.

The problem with both of those is that they can’t get you consistently fast Internet speeds. Professional VPN service providers have invested — and are still investing — millions into building server networks in order to offer a service you can rely on. In contrast, free services don’t have anything like that.

And while at some point you can get a decent Internet speeds with a free solution, it doesn’t mean you’ll get it the next time you want to use it. These things cost real money.

Also, with a proxy service – your identity is not completely protected online. Remember that saying – if the product is free, you are the product.

And besides, most VPN services are not that expensive in the first place and also offer money-back guarantees. Meaning, if they don’t work for you during that money-back period – there is an easy way to ask for your money back.

So what are you waiting for? Hop over to our page with Best of the Best VPNs and take it from there. All of the services there have been field-tested, but for the truly best experience – go for the one at the top and forget about it. Yes, it’s worth it. 🙂