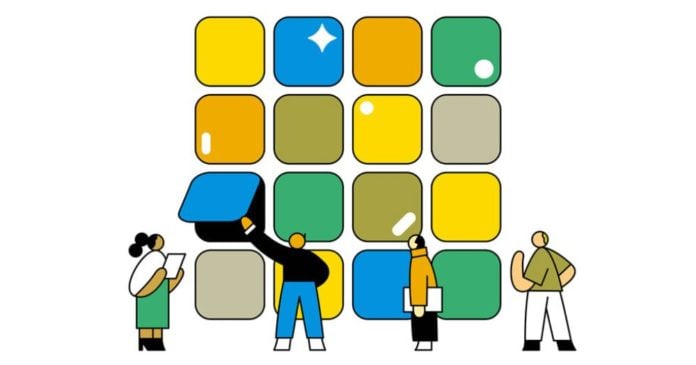 Out of all tech giants, we love Apple the most. Even though I personally don’t use an iPhone or a Mac, I have to commend the Cupertino-based giant for taking the privacy and security of its users seriously. Simply put, they don’t make money from tracking users and then serving them ads whenever possible.

The situation is similar in the App Store for which Apple hires real people rather than letting it all to algorithms to determine whether some app is fraudulent or not. The company has set systems in place and has engineered solutions to take on various threats.

To prove those claims, Apple released an inaugural fraud prevention analysis in 2020, showing that the combination of sophisticated technology and human expertise protected customers from more than $1.5 billion in potentially fraudulent transactions.

Recently, the iPhone maker released the 2021 report, claiming that it has protected customers from nearly $1.5 billion in potentially fraudulent transactions and stopped over 1.6 million risky and vulnerable apps and app updates from defrauding users.

Apple’s efforts to prevent and reduce fraud on the App Store require “continuous monitoring and vigilance across multiple teams.” Specifically, the system involves App Review and Discovery Fraud — which, combined, have proven to work effectively.

The App Review process is multilayered, combining computer automation with manual human review. In terms of software, Apple relies on proprietary tools that leverage machine learning, heuristics, and data accumulated since the App Store first launched. This way, Apple can quickly extract large volumes of information about an app’s potential issues and violations.

The second major component is human review, which ensures that every app and every update is reviewed by a human being to ensure they follow the App Store’s guidelines related to privacy, security, and spam.

In 2021, App Review helped over 107,000 new developers get their apps onto the store. Also, during the year, over 835,000 problematic new apps and an additional 805,000 app updates were rejected or removed for a range of reasons.

A smaller group of these rejections were for flagrant violations that could harm users or deeply diminish their experience. In 2021, the App Review team rejected more than 34,500 apps for containing hidden or undocumented features, and upward of 157,000 apps were rejected because they were found to be spam, copycats, or misleading to users — such as manipulating them into making a purchase.

Sometimes, developers try to circumvent App Review by creating an app that appears one way, only to alter its concept or functionality once it’s been approved. When Apple finds instances of this sort of fraud, App Review rejects or removes such apps from the store immediately, and the impacted developers receive a 14-day appeals process notice prior to termination. In 2021, over 155,000 apps were removed from the App Store for these kinds of violations.

As part of the goal to protect its users privacy, Apple App Review process also checks whether user data is being handled appropriately. To that end, in 2021 – the App Review team rejected over 343,000 apps for requesting more user data than necessary or mishandling data they already collected.

If users have concerns about an app, they can report it by clicking on the Report a Problem feature on the App Store or calling Apple Support, and developers can use either of those methods or additional channels like Feedback Assistant and Apple Developer Support. 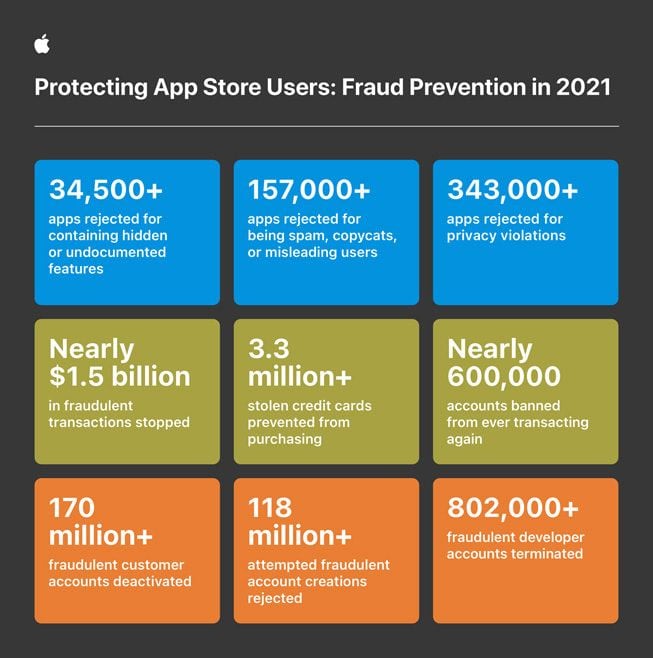 Apple is also taking a close look into app ratings and reviews, which are meant to improve discoverability on the App Store while providing meaningful intelligence to developers who take this feedback and improve their apps’ features and offerings accordingly.

Illegitimate ratings and reviews pose a serious risk to the App Store, as this sort of deception can lead users to download or even buy an untrustworthy app that attempts to game the system through misrepresentation. To tackle this issue, Apple has developed a refined system that combines technology with expert human review to allow Apple to moderate ratings and reviews.

With more than 1 billion ratings and reviews processed throughout 2021, Apple systematically detected and blocked over 94 million reviews and over 170 million ratings from publication for failing to meet moderation standards. An additional 610,000 reviews were also removed after publication based on customer concern submissions and additional human evaluation.

As an extra step, Apple found and blocked over 63,500 illegitimate apps on pirate storefronts — which are known to distribute malicious software often designed to resemble popular apps while circumventing the App Store’s security protections.

Apple takes action on fraudulent customer accounts, too. In 2021, Apple deactivated over 170 million customer accounts associated with the fraudulent and abusive activity. If an account exhibits similar behaviors to those that have engaged in previous abuse, they’re deactivated before it can be used at all. In addition, more than 118 million attempted account creations were rejected in 2021 because they displayed patterns consistent with fraudulent and abusive activity.

Finally to tackle payment fraud, Apple has invested enormously in creating more secure payment technologies like Apple Pay and StoreKit. These technologies are used by more than 905,000 apps to sell goods and services on the App Store.

In 2021 alone, as a result of a combination of technology and human review, more than 3.3 million stolen cards were prevented from being used to make potentially fraudulent purchases and banned nearly 600,000 accounts from transacting again. In total, Apple protected users from nearly $1.5 billion in potentially fraudulent transactions in 2021.

The iPhone maker’s announcement ends with the vow to continue working to detect fraudulent activity and accounts, and prevent financial crimes. You can’t help but love them for that. Again, even if you don’t use Apple products.