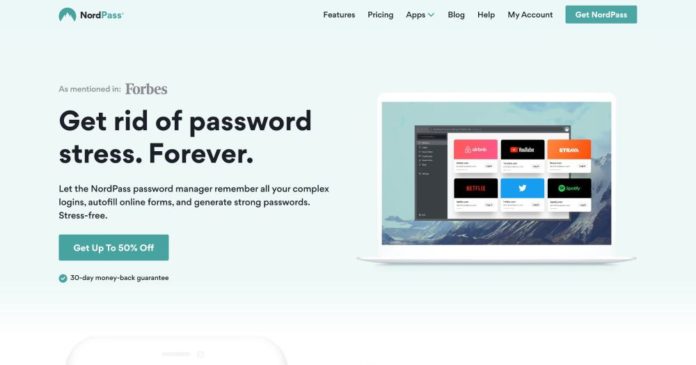 Popular VPN provider NordVPN has recently launched its very own password management app, five months after introducing it under an early access program. Called NordPass, it lets users easily and securely store and manage passwords across devices and across platforms.

The launch comes as password protection and management services are gaining steam, due in part to the flood of high-profile data breaches in recent years. And NordVPN thinks it has the right service for the task.

Most problems with data breaches occur due to poor password hygiene, particularly in businesses where 81% of all breaches are said to be due to compromised passwords. Password management services such as NordPass aim to solve this problem by encouraging folks to use automatically-generated “unguessable” passwords, thus negating the need for users to memorize or write them down.

NordVPN is by no means the only company in this market, with virtually all popular web browsers allowing users to store their password for later use. The problem with such solutions is that they are browser-specific and won’t work in other browsers and not even across all devices.

Also, there are services such as 1Password and LastPass, both of which have managed to attract millions of users to their offerings. In fact, the market for password management solutions in mobile devices alone amounted to $113.3 million in 2016, according to last year’s report from Grand View Research. The same research firm estimates the figure will rise to more than $2 billion by 2025, hinting us why NordVPN decided to enter this lucrative space.

These, browser-agnostic solutions work both on mobile and desktop, letting users carry their credentials across devices and platforms.

NordVPN says NordPass is built with a “focus on simplicity and security,” saving users’ memory space for more important things than logins.

“Some find passwords unimportant; some tend to save their imagination for different tasks,” Laura Tyrell, Press Officer at NordVPN, said in a statement. “Others have problems with remembering difficult combinations of letters and numbers. We all have been there, and that’s why we came up with NordPass.”

To keep the information secure, NordPass uses top-of-the-field XChaCha20 encryption for the password vault and Argon 2 for key derivation. Also, there is an option to use two-factor authentication for extra safety. Additionally, the tool has a zero-knowledge architecture to ensure ultimate security.

“Password information belongs to users only — that’s why our product has zero-knowledge encryption. By the time your data reaches our servers, it’s already been encrypted on your device. That means we have zero knowledge about the items saved in your vault,” added Tyrell.

Like its top competitors, NordPass is available on virtually all platforms out there — including iOS, Android, Windows and Mac OS. Browser-wise, it offers extensions for Chrome, Firefox and Edge, as well as Opera, Brave and Vivaldi.

The basic NordPass version is free but it only works on one device. Most users will opt for a paid plan that starts at $2.49 and, obviously, includes support for your computer, phone, tablet and other devices.

Founded in 2012, NordVPN is one of the most popular and most well-known VPNs in the world, with some 12 million users globally. It consistently ranks at the top of our Best of the Best VPNs list and is a highly recommended service for experts and newbies, alike.