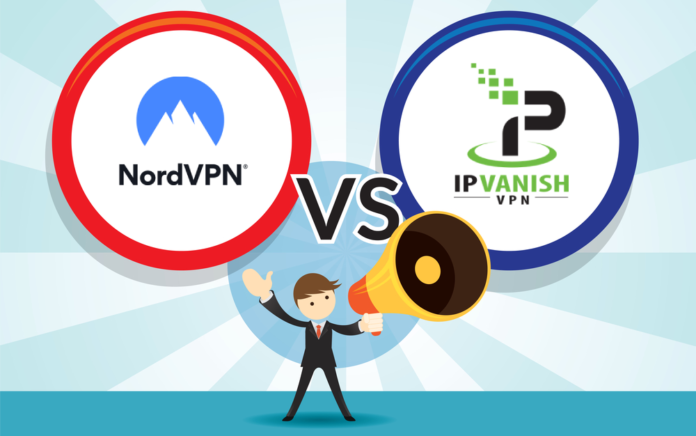 IPVanish and NordVPN are among the best VPNs on the market, offering comparable features suited for different kinds of users. NordVPN is bigger of the two, boasting a much larger network of servers that can, obviously, deliver better overall experience. Nevertheless, both companies have found their place in the market and both have solid userbases.

Let’s look at the two VPNs in more detail, shall we?

Servers & Locations
IPVanish has more than 1,300 servers spread across over 75 locations, including all the familiar spots in North America and Europe, as well as some in less common countries such as Moldova and the Philippines. For one reason or another, its network in South America is very limited. In comparison, NordVPN has 5,000 servers in 60+ countries, which combined are capable of delivering blazing-fast download speeds. That, in case you wonder, is one of the reasons NordVPN is one of the biggest (if not the biggest) players in this (VPN) market.

Platforms
Both NordVPN and IPVanish support all major platforms — including Windows, macOS, Android, iOS and Linux. Furthermore, both can work with routers, allowing other devices to benefit from more secure connections (i.e. gaming consoles, streaming boxes and smart TVs). However, unlike NordVPN, IPVanish doesn’t offer dedicated browser extensions. Where IPVanish shines though, is in the number of simultaneous connections — it lets users connect up to 10 devices at once; this number tops at 6 with NordVPN. We think that’s enough, but we’re not necessarily right on this one as different users have different (specific) needs.

Speed
NordVPN is faster, it’s that simple. In all our tests, NordVPN managed to beat IPVanish. That being said, you may not need all that speed for activities like streaming and torrenting (more on that in a moment). Watching movies and TV shows online doesn’t require a speed demon and the same goes for browsing the web and downloading files via BitTorrent. Waiting an additional few seconds or so to grab a file is not a deal-breaker. At least we don’t see it as such.

Security & Privacy
Again, IPVanish and NordVPN are both “top dogs” thus they support a slew of protocols, the most important of which is OpenVPN. It is known to deliver the fastest download speeds while also keeping your connection as secure as possible. Also, both services have a zero logs policy, which is always a plus in my book. But, while IPVanish is a US-based company, NordVPN operates from Panama — which doesn’t have intelligence-sharing deals with other countries.

Ease of Use
This is another easy win for NordVPN, which has super-fancy apps that are equally easy to use. The design of IPVanish’s apps leaves a lot to be desired. Last time I checked, they [apps] look like they were made some 10 years ago. In contrast, NordVPN’s software has a consistent and well-polished look and feel. That being said, using IPVanish apps is also easy with quick-connect option letting you fire-up a VPN connection in mere seconds. And once that part is done, you’re pretty much good to go.

Streaming & Torrenting
Except if you’re looking to regularly access BBC iPlayer, both IPVanish and NordVPN will work for you, letting you access all the streaming content you can chew along with the ability to download files via BitTorrent. Fans of the British entertainment, however, should get NordVPN which worked better in our tests. We did manage to access BBC iPlayer with IPVanish, but it didn’t work out of bet – we had to play around until we’ve found a server that works. When it comes to torrenting, we would say it’s a draw with both PIA and NordVPN delivering solid download and upload speeds.

Bypassing censorship
NordVPN is a winner here, even though it won’t work in China at all times. In other words, you can’t rely on IPVanish to bypass the Great Firewall of China, but you can use it in other high-censorship countries, where — we’re hearing — it works out of the box. And so does NordVPN, in case you wonder. The situation is the same in other places where your Internet may be limited, such as schools, work and so on.

Pricing
At first glance, NordVPN costs less per month but its best price requires that you get a 3-year subscription — that shouldn’t be a problem considering that we’re talking about one of the best VPNs on the market. On the other hand, IPVanish’s best price is with a 1-year subscription. It, however, has a short 7-day money-back guarantee whereas NordVPN’s guarantee is good for 30 days. If you’re looking to pay for a VPN with your crypto assets, NordVPN is the way to go. IPVanish doesn’t work with cryptocurrencies.

In a nutshell, that would be NordVPN. It consistently managed to beat IPVanish in all categories. Or at least, managed to deliver the same kind of experience.

NordVPN has one of the biggest networks on the market that can consistently deliver fast download and upload speeds. It is one of those services you can rely on, every single time. It is highly recommended for newbies and experts, alike.