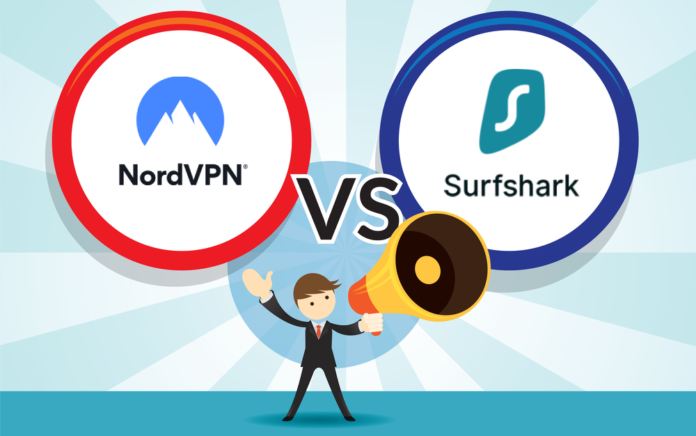 NordVPN and Surfshark are among the most popular VPNs and we can’t blame you from getting either one of them — in most cases, you’ll get a great service. There are some nuances though, and that’s the point of this article — to highlight the differences between the two services so you could get a better VPN. One that best suits your unique needs…

Here’s how NordVPN and Surfshark compare…

Servers & Locations
Surfshark’s network includes more than 1,000 servers in over 60 countries. All of the popular destinations in North America and Europe are covered, though there are just a few servers in Africa and the Middle East. Specifically, in the two regions – Surfshark has servers in Israel, Libya, South Africa, Turkey and the United Arab Emirates. In comparison, NordVPN’s network counts over 5,000 servers spread (again) across 60+ countries. Since this is partly the numbers game, we have to give this round to NordVPN.

Platforms
This round is a tie, with both services offering apps for all popular platforms (Windows, macOS, iOS and Android), along with browser extensions for Google Chrome and Mozilla Firefox, as well as a native app for Amazon Fire TV Stick. In addition, apps of both NordVPN and Surfshark look equally modern and easy to use. We would say that we slightly prefer NordVPN because of its more-white design, and that’s just the way we like it. You may prefer black-ish apps, and you would, therefore, like Surfshark more. Also, Surfshark lets you install its apps on as many devices as you want, whereas NordVPN tops at 6 simultaneous connections.

Speed
Generally speaking, NordVPN is faster, but… we have also found Surfshark to be quite fast especially when connecting to nearby servers. Heck, in some cases, we have found it to be faster than NordVPN despite not having that many servers. It all depends where do you want to connect to, I guess. Most users will thrive with NordVPN though, as they won’t have to worry where a server is located — NordVPN has one of the biggest (if not the biggest) networks around. And, obviously, more servers help deliver faster download and upload speeds.

Security & Privacy
Surfshark uses IKEv2/IPsec as a default protocol on all of its apps while providing an option to change to OpenVPN. NordVPN also supports OpenVPN, which is our favorite protocol — and which we suggest everyone to use for all their web whereabouts. When it comes to privacy, both services conduct their businesses in a zero-logs fashion. Also, both are located in privacy-friendly countries — Surfshark is headquartered in the British Virgin Islands, while NordVPN’s HQ is in Panama. These two countries have little to do with any major intelligence-sharing arrangement.

Ease of Use
As we have briefly noted above, both Surfshark and NordVPN rock fancy, modern and easy to use apps. If you can read, you can use their apps — the UI is rather simple, though with a quick link to advanced settings where you can fine-tune the VPN settings, change protocols, and tweak other options. Should you experience a problem, you’ll be glad to know that both Surfshark and NordVPN have your back — offering round the clock chat support with friendly staff waiting to help you solve any problem you may have. Also, websites of both services have a solid content offering with FAQs, knowledgebase, video tutorials and more.

Streaming & Torrenting
If video streaming is the primary thing you want to do with a VPN, you can get either Surfshark or NordVPN. Both services have proven their worth with all popular services — including Netflix, BBC, Hulu, HBO and even Disney+. The situation is just a bit different with torrenting; NordVPN has servers dedicated to P2P which you have to manually select (a super easy thing to do, BTW), while Surfshark automatically routes all P2P traffic through servers optimized for torrenting. We like the fact that the extra step of server selection has been removed from the equation. Nevertheless, we have found NordVPN to be more than reliable for downloading (and uploading) files via BitTorrent.

Bypassing censorship
Surfshark can help you bypass censorship but it’s not the best VPN for the task. It works best with the Windows app that comes with “NoBorder Mode” built-in. Alas, such an option is not available from apps on other platforms. NordVPN, on the other hand, is better suited for the task, especially in China where it could be used with some fine-tuning — since the Chinese government keeps blocking servers of all popular VPNs and they have to add new ones all the time. Luckily, NordVPN has enough resources to keep fighting this fight. And when it comes to other high-censorship countries, both VPNs get the job done.

Pricing
Simply put, Surfshark is more affordable, which doesn’t come as a surprise since it has to compete in this (highly competitive) market. It costs less per month with a two-year subscription than NordVPN with a three-year subscription. That tells a ton. We don’t think you should save on a VPN subscription, but it’s not our money we’re talking about. We believe you should get the best possible service and let it run in the background at all times. Both services offer a 30-day money-back guarantee and will gladly take your crypto assets.

NordVPN tops our list and it’s, obviously, a better choice than Surfshark. That being said, we have to add that Surfshark costs less, so you have to figure out for yourself — whether the extra money you’ll have to pay for NordVPN is worth it. We think it is, but again – it’s not our cash. If you can afford it, go for NordVPN. Actually, we think the right question should be — can you afford NOT to get the best possible VPN. It’s your data we’re talking about, and you shouldn’t be cheap with it. Don’t you agree?